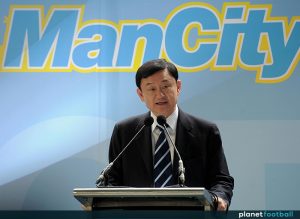 Manchester City owner Thaksin Shinawatra addresses the opening ceremony of the ManCityStore in Bangkok on May 16, 2008. Embattled Manchester City manager Sven-Goran Eriksson will have to wait at least another week before finding out if he still has a job according to City spokesman Paul Tyrrell who said on May 15, 2008 the club would be making no official comment other than confirming a review was being carried out into all aspects of the team’s operation. AFP PHOTO/Pornchai KITTIWONGSAKUL (Photo credit should read PORNCHAI KITTIWONGSAKUL/AFP/Getty Images)