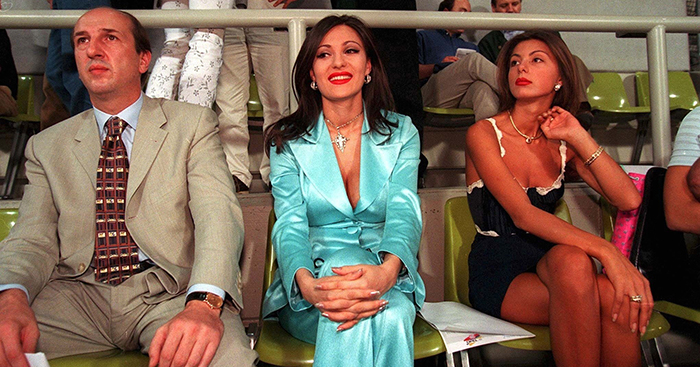 FK Obilić are currently competing in the seventh tier of Serbian football, unknown by many, but in 1998, led by a warlord, they played in the Champions League. This is their story…

As Carlo Ancelotti once put it, football is the most important of the less important things in the world. A game that can offer some sort of escapism, especially from war.

Yet in a collapsing Yugoslavia, football became a recruitment centre for paramilitaries, a propaganda machine, and a playground for one Serbian warlord.

Željko Ražnatović, popularly known as Arkan, took control of Belgrade minnows FK Obilić in 1996, a year after they were soundly beaten in the cup final by their neighbours Red Star.

The 4-0 scoreline came as no surprise, as at the mid-point of the 1990s, the dominance of Red Star and Partizan was total. But that was about to change, albeit only very briefly.

However, there was nothing at all romantic about Obilić starting to punch above their weight.

A capacity of just 4,000 fans saw them win promotion from the second division, and that success was a precursor to their historic title win in the First National League Group A the following year.

FK Obilić who won the Yugoslavian title in 1997/98. The club was owned at the time by the notorious warlord Arkan . pic.twitter.com/ik26cePZad

Head coach Dragan Okuka was keen to take much of the credit for their surprise triumph, attributing it to the use of a 3-5-2 formation. In reality, it was the presence of Arkan – both on the board and often next to Okuka in the dugout after the Serbian FA had handed him his coaching badges – that steered them to the championship.

To some extent, Obilić were easy targets for Serb nationalists because of their position in the capital and, crucially, because of the symbolism attached to their name.

Christened after Miloš Obilić, a fourteenth century knight who had sworn vengeance against the Ottoman Empire at the Battle of Kosovo, they epitomised the kind of nationalism being harnessed by Slobodan Milošević and which had trampled the terraces at Maksimir.

That said, Ražnatović was not strictly a one-club man. He had already made an attempt to buy Red Star, but they remained state-owned and his advances were knocked back. His role in their history was already secured, however, as he played a big part in the reorganisation of their ultras, the Delije, which somewhat inappropriately translates to ‘Heroes’.

The motives for this were clear and had nothing to do with his concerns about the atmosphere in the stadium. In their ranks, he found new members of his Serb Volunteer Guard or ‘Arkan’s Tigers’, who would go on to commit some of the worst atrocities seen in Europe since the Second World War.

Football has long gone hand-in-hand with revolution in the region. This wasn’t a new phenomenon, but the relationship became more dangerous than ever.

It peaked with Yugoslavia’s 3-1 victory over the USSR in the 1952 Olympics, a game that was more about a political message, the triumph of the ‘Third Way’ over traditional Russian communism after the Tito-Stalin split, than the action on the pitch.

It was much the same during the 1990s, the Maksimir riot setting the tone for the rest of the decade. That game between Dinamo Zagreb and Red Star Belgrade might have been more effectively billed as the Bad Blue Boys vs the Delije, as few people remember the match itself.

The intense fighting wasn’t restricted to supporters either, with Dinamo’s Zvonimir Boban kicking a police officer who was attempting to stop his team’s fans making their way towards the Red Star end.

It was to become known as the ‘kick that started the Balkans war’, but in interviews since, Boban has perhaps exaggerated the nationalist fervour that inspired his actions.

While Maksimir is the defining image of Yugoslav football violence, it became impossible to separate the two concepts when men like Arkan became involved in an official capacity.

Post-Bosnia, Obilić was Arkan’s side project where he could employ many of the same tactics of intimidation used in warfare. They chiefly targeted the opposition, but they extended to his own players.

Nikola Lazetić was allegedly stuffed in the boot of a car to make him sign for them, and it’s difficult to imagine that he was the only one who was there under duress.

Playing even further on his notoriety, Arkan would walk into the away dressing room before games. His favourite threat, a bullet to the kneecap, struck fear into the hearts of young professional footballers, with opponents often frightened to leave the pitch at the final whistle for fear of bumping into him in the tunnel.

Referees suffered the same fate, Zoran Arsić once claiming he had a gun held to his head in his office. He’s since alleged that the Serbian FA asked him to keep quiet about the episode for a long time, his reward being that he would never have to officiate a game featuring Obilić again.

FK Obilić Belgrade, the champion of YU 1998, with his boss Arkan, a war criminal and a football maecenas. pic.twitter.com/VDvSUwxjAk

There were incidents of overt match-fixing too. Partizan were thought to have rolled over to help Obilić win the league at Red Star’s expense, and Obilić duly returned the favour by throwing the cup final a few months later.

Football’s governing bodies in Europe appeared to turn a blind eye to this activity, if they were aware of it at all.

What went on in a small neighbourhood of Belgrade was of little concern, at a time when the international media were depicting Yugoslavia as a barbaric, failed state.

When war came to the Champions League

But after the title win of 1998, UEFA suddenly had a problem on their hands.

The idea of a Serbian warlord, indicted by the UN for crimes against humanity, owning a team who were about to qualify for the Champions League was an uncomfortable one.

Predictably, then-UEFA president Lennart Johansson was threatened with assassination when he threatened the club with expulsion from the competition. He avoided that fate, though only because the hitmen sent to silence him were deprived of a clear shot.

As it happens, Obilić were out of their depth anyway, and removed themselves from the Champions League by more conventional methods, losing to Bayern Munich and subsequently crashing out of the UEFA Cup too, this time at the hands of Atletico Madrid. 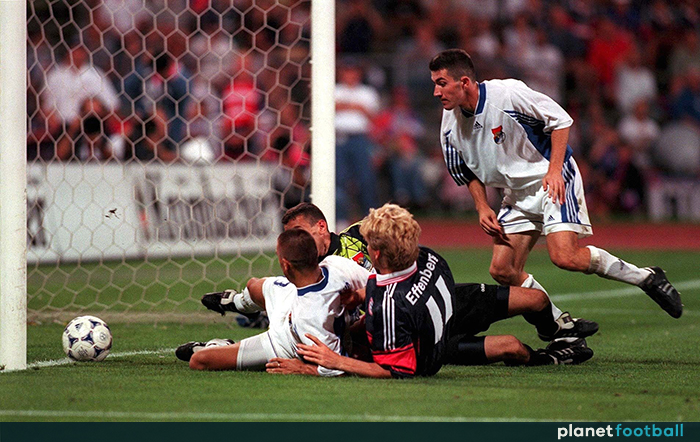 By now, the heat was on Arkan and he handed over the reins in 1998. He would be conveniently replaced by pop star Ceca, who happened to be his wife.

For Serb nationalists, their wedding had been the ‘Charles and Diana’ event of the decade. Owning Obilić was just another string to her celebrity bow, but that fame would soon turn to infamy. She did not take kindly to being compared to Eva Braun in the British press.

In the mid-90s, being a club chairman in Serbia was one of the most dangerous jobs going, second only to being in a dangerous paramilitary organisation. Almost a dozen notable chairmen were murdered.

It wasn’t until 2000 that death caught up with Arkan, and amid a spray of bullets fired by four men in tracksuits in the Intercontinental Hotel, his club died too. Ceca supposedly had a premonition of his death in her sleep and she will have no doubt predicted also that once their opponents were no longer terrified to score a goal, the team’s luck would run out.

Ceca finally went to trial in 2011 and pleaded guilty not only to the possession of 11 firearms but also to the embezzlement of millions of euros from the transfers of 15 Obilić players.

Part of the criminal appeal of running a football club was that it involved big money deals, selling players to top European sides and swindling a significant portion of the fee in the process.

That said, the ‘guilty’ plea was actually a bargain and she denied having committed the offences, blaming her late husband for the weapons and the fraud.

While she received a questionable sentence of just eight months under house arrest, as opposed to the maximum penalty of 12 years in prison, history is starting to be re-examined thanks to the International Criminal Tribunal for the former Yugoslavia.

The Tribunal has its faults, not least that it is still going on today because of its long-drawn-out process, but in its defence, it has contributed to a better understanding of the conditions which allowed the rise of a man like Arkan and of how he was able to exercise such power in the realms of government, sport, and beyond.

His demise ran parallel to the downfall of FK Obilić. NATO intervention in Serbia cut their season short when they were still at their peak, and without their malevolent owner, they quickly dropped back down the divisions, eventually plunging to the eighth tier of Serbian football.

Next year will mark 30 years since they formally turned professional. The team is now close to non-existent, right down to the junior teams, and the ladies team is now the pillar of the club.

For as long as its stadium exists, with its nationalist murals and the four Cyrillic c’s – standing for ‘only unity saves the Serb’ – etched onto the outside walls, it will remain a worrying symbol of the tensions which have never really gone away.