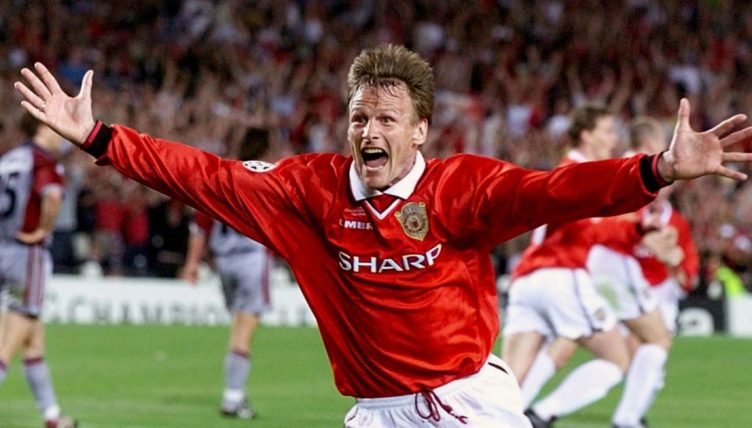 After Eric Cantona decided to hang up his boots in 1997, Manchester United raised a few eyebrows by signing Teddy Sheringham from Tottenham.

Cantona, who had won four league titles and two FA Cups at United, left some pretty big shoes to fill, and at 31, Sheringham was perhaps not the most obvious player to do it.

Not that he felt any pressure.

“When I joined Tottenham, Lineker had just left, and I took his No.10 shirt,” he tells Planet Football in association with 978bet. “When I came into the England set-up, Peter Beardsley was on his way out and I took over that sort of role.

“You’ve got to take the positives out of these things and Sir Alex Ferguson wanted me to sign for his football club so I thought, fantastic, that will do for me.”

Having won the previous two titles, United started the 1997-98 season in great form, but injuries to Roy Keane and Ryan Giggs ultimately derailed their progress and they ended up trophyless as Arsenal won the double.

But Sheringham had scored 14 goals in his debut season at Old Trafford and wasn’t worried about his place in the side at the time.

“I don’t know if it was me being big-headed or what, but I didn’t feel that Yorke was coming in to replace me,” he says. “I thought that I could still be the main part of the strike force.

“I know there was Andy Cole and Ole Gunnar Solskjaer there as well, but I was quite happy with my abilities and I kept faith in them.

“There was chopping and changing, it was only when Yorke and Cole hit it right off that they became the main partnership and it worked well, one playing into the hole and one went beyond.”

Sheringham was finding opportunities harder to come by, but United went from strength to strength throughout the 1998-99 season, battling with Arsenal in the league and impressing in the cup competitions.

Sheringham says there was never any talk about the possibility of what they might win, let alone a treble, but United ultimately went into the final three games of the season knowing that three wins would see them lift the Premier League, FA Cup and Champions League.

Sheringham, however, was not sure how much of a role he would have to play.

“Everybody has got their own story about those 11 days,” he says. “First of all, I was very surprised to be starting the last league game against Tottenham.

“We went 1-0 down, then got back into it at 1-1. I got booked just before half-time and the manager changed it, so I’d gone from the delight of starting the game against Tottenham, a game we had to win to win the league, and then being brought off and being very unhappy but the team won.

“I’d played my part, not as big a part as I’d wanted to that season to win the league, but I’d finally got a winners medal in the Premier League so I was delighted.”

A REMINDER:#OnThisDay 1999
Goals from Andy Cole and David Beckham secured Manchester United a win against Tottenham, and the Premier League title.

The first step towards the treble completed #MUFC 🏆🔴pic.twitter.com/aQZQoHLVaU

After starting and then being brought off against Tottenham, Sheringham experienced the opposite emotions when he was named on the bench for the FA Cup final against Newcastle United.

“I was very disappointed,” he says. “But things changed very quickly after six minutes when Roy Keane got injured and the manager turned round to me and asked me to get ready to go on.

“I was shocked to think it was me going on for Keane, but he shuffled the team around. He obviously had views on the Champions League final and he wanted to save some legs for then.

“Within a minute of me going on, I’d scored the first goal in the FA Cup final so an amazing turnaround. That’s what happens in football sometimes. Then I set up Scholes, got named Man of the Match and I thought, ‘Do you know what, I must have a chance of playing in the Champions League final now.'”

FLASHBACK: #OnThisDay in 1999 Sheringham and Scholes combine to win the FA Cup for @90sUtd, and march towards the Treble.pic.twitter.com/wmDwzvojUk

But Sheringham’s impressive performance in the FA Cup final wasn’t enough to secure him a place in the starting line-up against Bayern Munich.

Ferguson instead opted for Yorke and Cole, who had both scored in the Champions League semi-final second leg against Juventus.

“You have to go on current form,” Sheringham says. “But I think he’d known two weeks previously how he was going to play each game, which team would set up and how we would win all three games so he obviously had his idea about that, but we all know that football changes.

“Perhaps if I’d scored a hat-trick in the FA Cup final, he might have thought that there’s no way he can leave me out. I’d scored one, played well and set up another and I thought I had a chance of playing so you can understand how I felt when I was told that I wouldn’t be.”

With United trailing 1-0 at half-time following Mario Basler’s early goal, Ferguson told Sheringham that he would come on in the next 15 minutes if things hadn’t changed. Selfishly, he hoped that would be the case.

“I’m sitting here now, watching Manchester United in all these big games and I’m a supporter, I want the club to do well,” he says.

“When you’re an actual footballer, you want to play a part in it so once he told me that at half-time I hoped that the game would stay the same for the next 15 minutes.”

Fortunately for Sheringham, United weren’t able to score an equaliser at the start of the second half and he was brought on to replace Jesper Blomqvist in the 67th minute.

Solskjaer then replaced Cole in the 81st minute, but United were still trailing when the fourth official indicated that there would be three minutes of injury time.

In one last throw of the dice, goalkeeper Peter Schmeichel went up for a late corner and joined United’s forwards in the Bayern penalty area.

“We needed to do something and to see that big green jersey out of the corner of my eye coming up, I’m thinking, ‘Shit, it’s getting a bit late now.’

“When the ball came into the area from the corner, it went to the far post. Yorke half nodded it back in and [Stefan] Effenberg tried to clear it but slashed at it and only got it to the edge of the area. It was coming down on Giggs’ right foot on the volley and I thought, ‘F*ck me this could go anywhere,’ and I was right, it did.

“It came bobbling towards me and I just had to help it on its way. I had a swing at it, it wasn’t the best connection I’ve ever had either, it came off the sock of my ankle and screwed into the bottom corner. That’s what dreams are made of.”

Sheringham checked to see if the linesman had raised his flag before running to celebrate with the United fans who had travelled to Camp Nou.

Having been behind for most of the Champions League final, it looked as if United had now forced extra time.

“We thought we were gonna have another half an hour and little did we know that a minute later, Ole goes down the left wing, tries to take on [Samuel] Kuffour and as he’s tried to cross it, it’s come off Kuffour and gone for a corner,” Sheringham says.

“You can imagine how I feel, I’m 10 foot tall, I’ve just scored the equaliser and I’m good in the air anyway so let’s see if I can score another one.

“I made out to go to the far post, got across my man at the near post and got up to head it in the near post. But I instinctively knew that I was up a little bit too early and I felt that if I had headed it for the near post it would’ve gone over the bar because I would’ve been underneath it a little bit.

“The only thing I could do was to help it into an area where hopefully one of my team-mates might be that could finish it off and that’s exactly what I did. I flicked it into an area and Ole was there to hoist it into the roof of the net.”

On this day: Man Utd completed a famous treble in 1999

Moments later, referee Pierluigi Collina blew the final whistle and the United players had secured their place in the history books.

“There was so much jubilation, we were right in front of the Man United supporters as well, ” Sheringham says. “We took the trophy down there and showed them. I think we were out there for about 45 minutes afterwards, it’s probably the longest celebration I’ve ever seen or been part of.

“It was just surreal that we didn’t want it to end. We knew that there would be a party that night but there was no rush to get off that fantastic pitch and the celebrations were unbelievable.”

You can watch the full interview with Sheringham, in which he also discusses his exit from Tottenham, below.