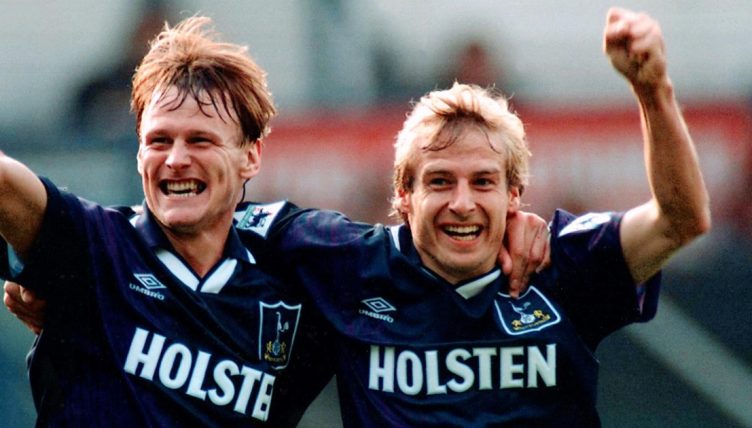 After five enjoyable but trophyless years at Tottenham, Teddy Sheringham found himself at a crossroads in the summer of 1997.

Sheringham, who joined Tottenham from Nottingham Forest in 1992, hit the ground running at White Hart Lane, finishing his debut season as the Premier League’s top scorer.

The striker went on to form a brilliant partnership with Jurgen Klinsmann in 1994-95, only for the German to leave after just one season in north London.

Gerry Francis struggled to build a side that could compete with England’s elite and Spurs finished eighth and 10th in the following two seasons, while silverware also proved elusive.

Sheringham, who had turned 31 in April 1997, was still waiting to win his first major honour in English football and was running out of patience.

“I didn’t think the club were as ambitious as I was at the time,” Sheringham tells Planet Football in association with 978bet.

“I think they’d had their fingers burnt with buying Klinsmann, [Gheorghe] Popescu, [Ilie] Dumitrescu and then 18 months later, all of them had gone. And I didn’t feel that the club were buying the same calibre of players and I wanted to play with the best players in the world.

“I didn’t want to leave Tottenham, I wanted the best players in the world to come and play with me, but it was obvious that that wasn’t going to happen.”

During negotiations about a new contract at Tottenham, he spoke to chairman Alan Sugar and looked for reassurance about the club’s direction.

While Sheringham didn’t get fired in the boardroom, that decision ultimately signalled the end of his first spell at White Hart Lane.

“I asked the chairman what type of players he was going to be buying, and he said it’s nothing to do with me so we ended up having a row,” Sheringham says.

“I said, ‘Well I think I better leave then,’ and he said, in not quite these words, ‘Go on then.’ So I put in a transfer request.”

According to reports at the time, Everton, Liverpool and Newcastle United were among a long list of early suitors, while a move to Italy seemed to be on the cards at one point.

But the striker was surprised – and delighted – when another English club suddenly entered the race for his signature that summer.

“When people heard at the end of the season that I was unhappy and I’d handed in a transfer request, Newcastle were interested and Liverpool were interested, that was the only two clubs that I knew were having a look at the situation,” Sheringham says.

“I didn’t ever get close to signing for either of them. I think I spoke to [former Liverpool manager] Roy Evans and his chairman around that time and it didn’t happen.

“When I came back and realised that a move was going to happen, I thought it would be either Newcastle or Liverpool, but then when I found out it was Manchester United I was overjoyed obviously.” 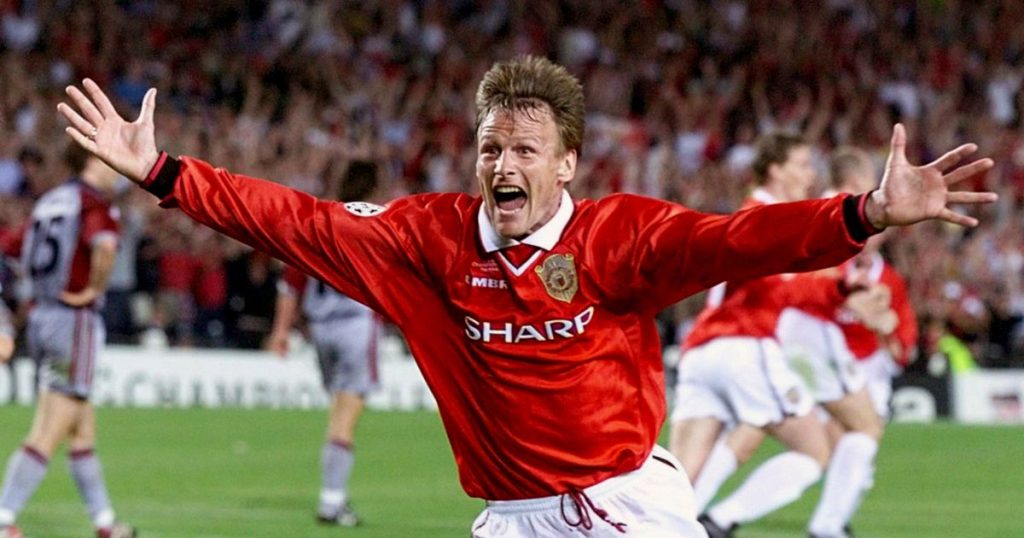 Sheringham completed his £3.5million move to United and was tasked with filling the void left by Eric Cantona, who had stunned United fans with his sudden retirement.

While this would be a daunting task for most players, the England international backed his own abilities and didn’t feel any pressure.

“When I joined Tottenham, [Gary] Lineker had just left, and I took his No.10 shirt,” he says. “When I came into the England set-up, Peter Beardsley was on his way out and I took over that sort of role.

“You’ve got to take the positives out of these things and Sir Alex Ferguson wanted me to sign for his football club so I thought, fantastic, that will do for me.”

On the opening weekend of the 1997-98 season, Sheringham made an immediate return to White Hart Lane but missed a penalty against his old side.

Despite that miss, United kicked off the season with a 2-0 win against Spurs and were hoping to secure their third consecutive Premier League title.

But injuries to the likes of Roy Keane, Ryan Giggs, Peter Schmeichel and Gary Pallister derailed their campaign and Sheringham was forced to watch on as Arsenal won the league and cup double in 1998.

“When we didn’t win anything at the end of the season I was very disappointed,” Sheringham says.

“I’d obviously put it out there that I wanted to leave Tottenham to win things and that’s why I was going to Manchester United and I had it rammed down my throat that that wasn’t the case at the end of that first season.“

Fortunately for Sheringham, he didn’t have to wait very long before having the last laugh.

You can watch the full interview with Sheringham, in which he also discusses the treble-winning season at United, below.