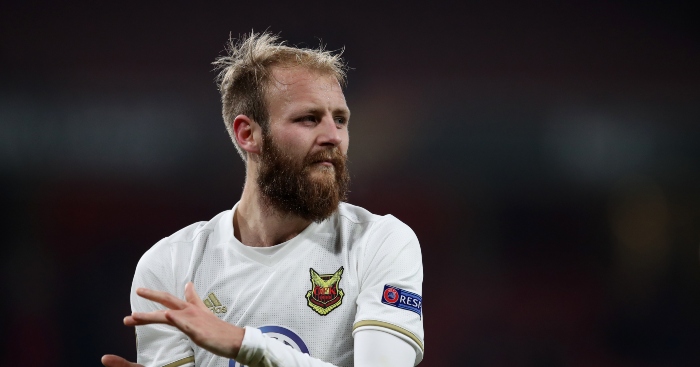 Kieran Trippier, Jadon Sancho, Chris Smalling – when you think about English players currently challenging for silverware abroad, these are the names likely to come to mind.

But there is one more name that is likely to have been overlooked: Curtis Edwards.

The 25-year-old former Middlesbrough Academy player is currently loving life at Swedish club Djurgårdens, who are just one point away from lifting their 12th league title.

Led by the head coaching duo of Kim Bergstrand and Thomas Lagerlof, the team are currently three points clear at the top of the Allsvenskan with just one match remaining.

Despite their slender advantage at the top of the standings, there are still two other horses in the final stretch for the title. Djurgårdens, with a goal difference of +34, are three points ahead of Malmö (goal difference +35) and Hammarby (also +34).

This is without a doubt one of the most exciting and unpredictable title battles in recent memory. And Edwards is in the thick of it all.

“It feels good, it’s a position we want to be in,” Edwards told Planet Football ahead of Djurgårdens clash with Örebro this week, which they won 3-0. “There are two tough games left, but if we play like we have been hopefully we can win them.

“After the last game when everyone was on 59 points, I’ve never seen it before. Now we have a little cushion, we have a decent home game coming up that we can win.”

Entire stadium jumps when Djurgården was 2-0 up against Örebro this monday. 1 point away from the title now. from r/soccer

Edwards has enjoyed an incredible career so far in Sweden, playing under Graham Potter in the Östersunds side that won the domestic cup and troubled Arsenal in a Europa League knockout tie.

It has marked a remarkable rise for the 25-year-old, who was working on a building site and considering an apprenticeship just four years ago.

“I was playing Northern league in England on a Saturday. One guy from Middlesbrough was playing in the third division in Sweden, Dale Hopson – he plays for Whitby now, and he said, ‘Would you come across to Sweden and play?’

“I was working seven to five every day on a building site and wasn’t really happy and I thought, ‘Nothing can really go wrong, I might as well try and see what happens.’

“There wasn’t a big risk. I was going to start a two-year apprenticeship and when I rang I was told that if I don’t enjoy the first few months in Sweden I can go and return to the apprenticeship.

“It wasn’t about going out to play professionally, it was about getting away and experiencing something new. Within six or seven months I was signed with a team in the top league and I don’t look back really.”

Edwards is now on course for a winners’ medal in the Allsvenskan should his side do the business in their final match against IFK Norrköping.

A draw is all that is needed to seal the clubs first league title since 2005. Not bad for a player who was plying his trade in the ninth tier of English football as recently as 2016.

Jonathan Franks discusses breaking through at Boro & ending up in Iceland