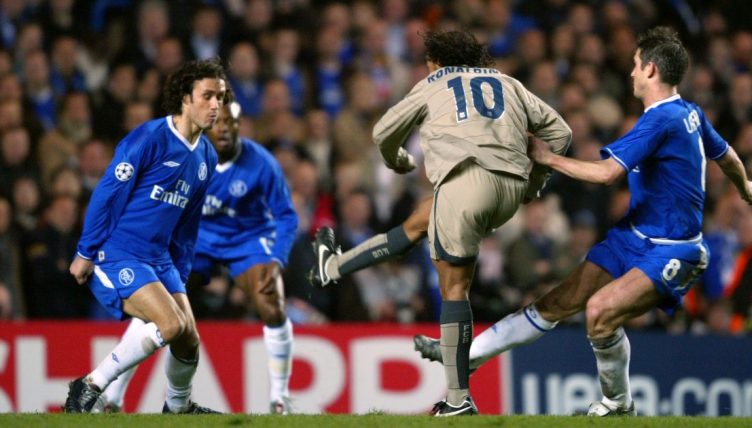 On the playground at school, wherever that playground was, there was always one kid; not really one of the football crowd, but liked to join in from time to time. Problem was, they wore Doc Martens and had mastered just one football skill: the toe punt.

It was the shot of shame, the ball flying over the fence as they put their steel toe capped boot under it time after time. The toe punt was frowned upon and its author derided.

But that toe punter (or toe poker or toe ender, or whatever else you might have called them) knew something the rest didn’t. In truth, the deriders were the footballing troglodytes. For the toe poke, when put to good use, is football’s most underrated art form, a skill as beautiful as it is effective.

The toe-poked finish has the advantage of being able to generate great power with little to no backlift, and the speed with which it can be executed often means that the goalkeeper is caught unawares, unable to set themselves before the ball has one flying past them and into the back of the onion bag.

Unsurprisingly, given those parameters, the toe poke is a technique often used in futsal, where tight spaces are common and the game is played at high velocity. Naturally, then, the finest proponents of the skill often come from where futsal rules the cityscapes: South America.

When Brazil hosted the World Cup in 2014, things did not go to plan. The 7-1 thrashing at the hands of Germany was one of the lowest ebbs in the nation’s history.

But three weeks prior to that semi-final, when Brazil beat Croatia 3-1 in their opening game in Sao Paulo, the outlook had been altogether rosier – and the moment of the match that day was a 91st-minute goal from Oscar, courtesy of his right big toe.

Ramires nicked the ball off the dallying Ivan Rakitic late on and Oscar was away, facing up the Croatian defence but with little support. Oscar reverted back to his futsal roots.

“I’d learnt how to play from trial and error, playing on my own, either in games on the pitch in the park or in the hall where we played futebol de salao – futsal,” the then-Chelsea player told The Telegraph before that tournament.

He showed it, providing the perfect example of why the toe poke is so effective, finishing when the ‘keeper, Stipe Pletikosa, expected him to turn back or pass to the left.

Yet Oscar was far from the first Brazilian to opt for the toe ender finish on the grandest stage of them all.

Before 2014, the last occasion on which Brazil reached a World Cup semi-final was 2002, when they went on to win the tournament with two goals from the magisterial Ronaldo Fenomeno against Germany.

To get them into the final, however, Ronaldo had needed to ‘chutar de bico’ as Brazilians say – to shoot with the beak.

Faced with the minimum of space against Turkey in the semi, surrounded by three defenders, Ronaldo punted the ball with that ‘beak’ of his boot, leaving Rustu Recber open-palmed and red-faced, looking around in disbelief.

The true Brazilian master of the skill, though, was Romario. Never has there been a footballer so blessed with the ability to make half a yard and half a second look like an acre and an eternity. The perfect complement to that ability was Romario’s propensity to use his right big toe to tuck the ball away.

Before Oscar and Ronaldo, he had already scored with his toe at the World Cup, netting the first against Cameroon in Brazil’s second group game in 1994. But his best poke without doubt came in a Barcelona shirt six months before that.

In a 5-0 El Clasico thrashing of Real Madrid, Romario scored a hat-trick for the ages, the first goal of which combined a mind-bending turn to leave Fernando Hierro glued to the spot and a toed shot to give Paco Buyo no chance.

Romario's goal against Real Madrid in 1994 was a stunner! pic.twitter.com/IvCECGevN4

Never to be outdone by their neighbours, Argentina has provided us with some fine examples of the toe poke over the years too.

Though it is best remembered for the dribble that led up to it, Diego Maradona’s second in the 1986 World Cup quarter-final win over England was tucked away with the tip of the cosmic kite’s Puma Kings.

But you’ve undoubtedly seen that hundreds of times, so to illustrate the Argentine mastery of football’s most underrated skill, we can instead turn to a more recent example, from two decades after El Diego’s magical effort.

In 2006, as the Albiceleste took on the Ivory Coast, two delightful footballers combined to produce a pass from heaven and a finish worthy of the assist.

Juan Roman Riquelme slid the ball behind the defence in his inimitable style and the ever-alert Javier Saviola prodded the ball under the ‘keeper, the only option available with the restricted time and space on offer.

The South Americans, then, are the toe poke’s masters. But those from the other side of the Atlantic are not always far behind. Gerd Muller could prod it home with the best of them, as could his spiritual heir Miroslav Klose, as England found to their detriment in 2010.

On English shores, the mention of that 4-1 round-of-16 game in 2010 brings back memories of Frank Lampard’s goal that wasn’t. But would it have made a difference?

Germany were in control before and after Lampard’s shot crossed the line and Klose had opened the scoring after just 20 minutes with one of those off-balance-so-have-no-choice-but-to-toe-poke toe pokes that are a striker’s secret weapon.

Like Klose, any great goal poacher worth their salt has a few of them in their back catalogue. In the English top flight, a succession of Liverpool and Manchester United strikers have lifted bountiful silverware based in part on their toe-poked finishing ability: Rush and Dalglish, Yorke and Cole. In the new millennium, Van Nistelrooy in Manchester and Torres on Merseyside.

Indeed, one of Torres’ most famous Liverpool goals, against United at Anfield, came with the pointiest bit of his boot, demonstrating the power that can be found with the toe when required.

To wrap up, though, it is necessary to go back to a Brazilian for the greatest toe poke of them all. Romario may have done it more often, but the finest single example came from his compatriot Ronaldinho at Stamford Bridge in 2005.

It was the pure essence of the wonderfulness of the toe punt all wrapped up in a single, deliciously re-watchable goal, one of those that no matter how many times you view it still surprises as much as it surprised Peter Cech on the night.

The buck-toothed Barcelona winger saw the smallest gap, a narrow tunnel of light between three defenders with the corner of the goal at its end. There was only one option to get it through the gap and, after a wiggle of the hips, he jabbed at the ball, sending it arrowing into the corner of the net.

Ronaldinho scored *that* goal against Chelsea 🤯

Clive Tyldesley summed it up perfectly and with his perfect summation distilled the toe poke’s great virtue: “You just didn’t see it coming and in the blink of an eye, back of the net.”

If you want to know the moral of this story, it is this: always reach for the nail clippers before you play football. You never know when that big toe might come in handy and if you haven’t trimmed your nails, it’ll bloody well hurt.