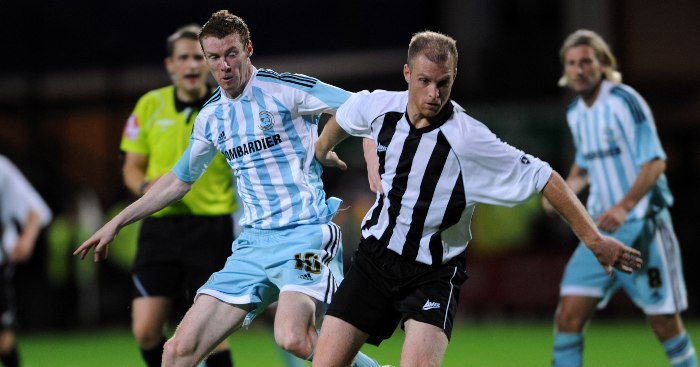 To only add to the surreal atmosphere, rumours are flying around that some of the biggest superstars of 2000s football – David Beckham, Luis Figo and the like – are coming in on the back of a huge takeover at your club.

It was July 2009 when Munto Finance took over Notts County in a multi-million pound deal, vowing to take the club to the Premier League within years.

Ian McParland had started his summer early, though, pre-Munto Finance, signing Neal Bishop on a free transfer from Barnet in June, making him the first signing of a crazy few months at Meadow Lane.

The midfielder had been playing semi-professional football just a few years earlier, milling around the Northern League and Northern Premier League before making his professional debut aged 26 – almost 10 years after his release by Middlesbrough as a teenager.

He was the man McParland wanted: a leader to help take the club up the divisions and keep the dressing room together, although he probably didn’t expect to be browsing a completely different calibre of transfer targets for his following signings.

In the latest episode of the Blucerchiati Podcast, Bishop opens up about what exactly went on over that crazy period.

“When I signed, there were whispers of investment coming into the club,” Bishop says. “The manager said he wanted to bring two or three in, but to be honest I don’t think even he knew what was to come four or five weeks later.

“With Munto Finance, Sol Campbell turns up, Sven-Goran Eriksson turns up, and it was a crazy, crazy summer when I look back at it now.

“We were in Austria pre-season and we’d heard the club had been taken over, but nothing could really prepare us for what was to come.”

What was to come was a spectacular series of events. Munto Finance set about their work immediately, bringing in former England and Manchester City manager Eriksson as their director of football, and went for the world’s big-hitters to make Notts County huge.

Eriksen had been sold the dream. For a footballing man, it was the perfect project – almost like real life Football Manager. Take a club from the bottom of League Two to the Premier League.

Later down the line, and with time to reflect, Eriksson described it all as nothing other than a “big mistake”.

But while one may have expected Eriksson, a man who has managed at world football’s highest level, to take a backseat role and not particularly interact with the people around the club, quite the opposite was true.

“Sven was really good,” Bishop says.“You hear the whispers and you hear the rumours in the national media and you just think it’s rubbish. And then one day, Sven is there.

“His driver was there, Tord Grip was with him. But as a bloke he was really good. He was really quiet, but he’d always want a chat. He was brought in as a technical director and he was always one to talk.

“He’d come in at lunchtime and watch training and I’d say he was quiet. He came across as a quiet bloke. But then you’d go into Nottingham on a Saturday night and he’d be sat there, in the corner of The Living Room with his section cordoned off and he’d always wave you in.

“There’d be drinks everywhere and you’d be thinking, ‘It’s surreal is this.’ You’re sitting in a pub in Nottingham and Sven-Goran Eriksson is buying you drinks.

“You’re sitting there thinking, ‘We’ve got a game Tuesday,’ and he’s getting bottles of champagne and pints in for all of us, and you’re thinking, ‘Oh my God, if the gaffer finds out we’re in trouble.’

“It was surreal, the whole thing and everything that went with it. It was a bit of a circus if I’m honest. 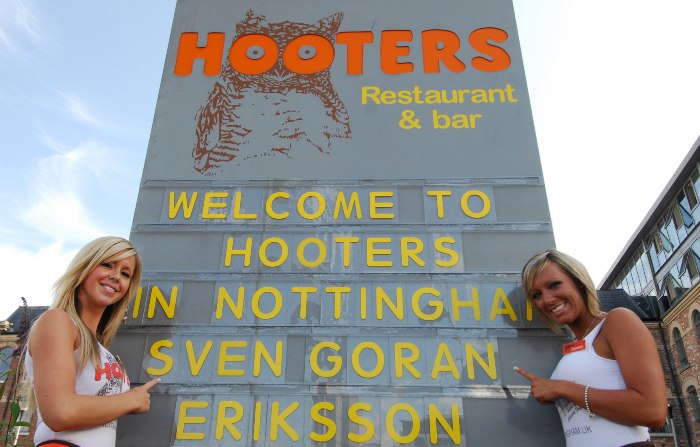 “Sven was the face of this company taking over. He was there mainly to facilitate the takeover and use his contacts to bring players in. We were looking at good League One names and good League Two names that the manager wanted to bring in when I signed.

“The next thing, there’s talk of Roberto Carlos and all these names coming through. Sol Campbell too, and you think it doesn’t seem real for a League Two club.

“But then, there was always something in the background that made you think something wasn’t right, especially when you’ve got the butcher and the milkman in reception one day kicking off that their bills hadn’t been paid, yet we had Sol Campbell training with us, so it all smelled not right from the start to be honest.”

Indeed, while the media were focused on Notts County becoming the League Two Galacticos, the players already at the club – less glamorous names like Mike Edwards and Craig Westcarr – weren’t taking the incoming rumours too seriously.

“We had a good group, so we’d laugh about it,” says Bishop.

“We had good lads. We had lads like Jamie Clapham at left-back and everyone was saying to him, ‘Claps, we’re signing Roberto Carlos, so you might as well go pack your boots and disappear mate because you have no chance. You can fight for your place all you want, but you’ve got absolutely no chance.’

“We just saw the funny side of it and took the mick out of each other, as lads tend to do. We didn’t take anything too seriously.”

But finally, the rumours bore fruit, and a contact of Eriksson came good – former England defender Campbell had signed for the club.

Just two years earlier, Campbell had played and scored in the Champions League final for Arsenal, but he was without a club following his release from Portsmouth.

And while he still had offers from the Premier League, Notts County was his club of choice as the defender penned a lucrative £40,000-a-week four year contract – money that saw him blitz what any League Two player earned in a year.

“Sol Campbell turned up, but I think he got wind of what was going on,” Bishop says. “As soon as he turned up, he disappeared again after he played one game at Morecambe and got ran ragged.

“But to be honest, [when he signed] I was delighted because I had a whacking great promotion bonus in my contract.

“So I’m thinking, if we get as many of these big hitters down as possible, I might not have to play half the games here and I was on a two or three-year deal anyway, so worst case scenario, I play a few games, we get promoted, I get the bonus and the next two years paid up. It was win-win for me.” 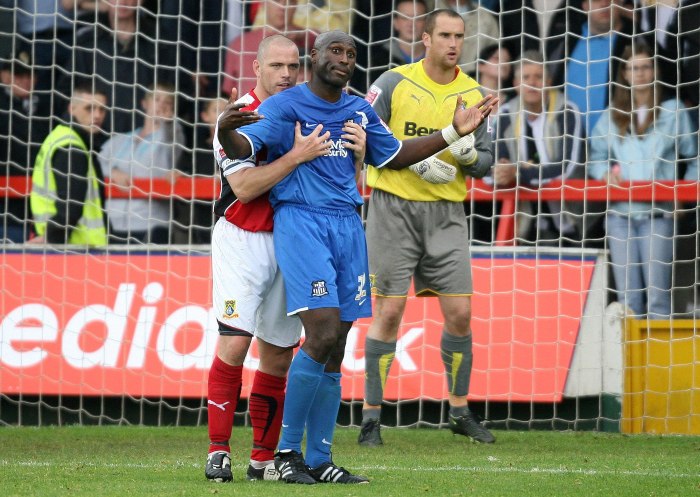 Campbell made his debut for County at Christie Park against Morecambe, a far cry from the vast arenas of the Premier League and opponents like Manchester United, Chelsea and Liverpool.

The centre-back was struggling for fitness and, on a pitch that was more like the Dog and Duck than the Emirates, he had nothing short of a shocker.

Morecambe approached the game aggressively and played a direct style, beating the League Two favourites 2-1. Campbell endured a torrid time – a theme that ran through training as well as his only appearance for the club.

“He couldn’t believe it. He couldn’t stand up straight in the dressing room because of the ceilings in there. He was getting battered and I remember his face when we all got fish and chips on the coach after the game.

“He was looking at it and I think it sort of hit home a bit of reality for big Sol there. He realised he wasn’t in the Premier League anymore when the lads were tucking into fish and chips after a 2-1 defeat at Morecambe.

“It was almost disbelief from the big man, but again, these lads like Sol when you speak to them, you realise they’re just normal blokes. But I think Sol just wasn’t used to the level, the standards, the pitches and it come as a hell of a shock to him.

“He integrated really well with the group, though. He was a good lad. He obviously wasn’t used to the facilities, or the lack of should I say, that a League Two club would have. But let’s be honest, Notts County is a good League Two club – or was at the time.

“They’ve got a lovely stadium, they train at the university, so for League Two it was a big club, but he just wasn’t used to it. Obviously they’ve got so many staff at the Premier League clubs where he’d been and it was all just different.

“To be honest, he came in and he was way off it. We were doing simple passing drills and the ball is bouncing off him and it’s flying everywhere, and you look and think to yourself, ‘Who’s that?’

“You look across, the ball is skimming your head, and it’s Sol Campbell, he’s having an absolute nightmare.

“I just think mentally, he must have been down, because even after he left he signed a short-term deal at Arsenal and went back to play in the Champions League, so it just shows you what a crazy game football actually is.”

However, away from the signings, rumours around the club looked bleak. While future Premier League-winning goalkeeper Kasper Schmeichel was lined up to come in for the No.1 spot, Panorama were investigating the club in a show that later aired on the BBC.

Bills weren’t being paid and there rumours were rife that Eriksson, alongside most people at the club, were being duped.

“At the same time, Kasper Schmeichel came down, but he was just a young kid at Manchester City at the time,” Bishop says. “Sven had known him from there.

“He was a great lad and I still speak to him now. He’s a really nice kid. But the feeling at the club among everyone was almost that it was too good to be true and that’s the way it came across really.

“We were all thinking, there’s got to be a snag here, and that’s how it proved. There was no face for this group, apart from Sven, in the building.

“We’d never seen any one of the money men, they never really appeared, even though people would say they’re coming in this week, or coming in that day. They never turned up, and I remember that Panorama did a programme about them.

“Sol obviously then left the training ground one day. He said he had a tight hamstring and by the time we got in after training, he’d picked up his boots and he’d cleared all of his locker out.

“At that point we sort of knew that things weren’t right and later on in that season, it all hit the fan and it turned out to all be one big con really and there was no money.”

Despite the bizarre antics continuing – both Hans Backe and Steve Cotterill took the managerial job after McParland’s October sacking – Notts County went on to win the League Two title, while Sol Campbell returned to Arsenal under Arsene Wenger.

Munto Finance, however, had lied about their Middle Eastern backing and plunged the club to the brink of bankruptcy.

Peter Trembling took the club over from the group, sourcing investment to pay off debts – in the end alienating County fans for his defence of Munto Finance – before former Lincoln City chairman Ray Trew bought it, just months later.

Eleven years on, Notts County are playing in the National League having been relegated from the Football League for the first time in their 157-year history in 2019. As is often the case, the dream definitely did not become the reality.