The remarkable Japanese goalkeeper who’s sidestepped the passing of time 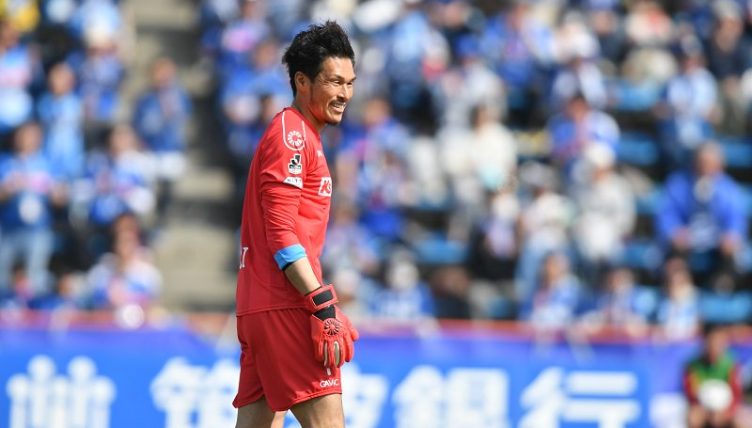 A goalkeeper in Japan’s second tier has been with his club since 1999, breaking records and becoming a cult hero.

For the most part, people in their mid-forties don’t have the same job — with the same employer — that they had at 22.

Truth be told, if I woke up, aged 44, and found myself working the minimum-wage nightmare I did in my early twenties, I would wonder where things had gone wrong. And the uniform almost certainly wouldn’t fit.

For Japanese footballer Koji Homma, however, a 22-year stint in the same role (goalkeeper) is no source of shame: it’s a badge of honour that has seen him break national records and earn the adoration of fans.

Homma, standing 6’1 and sporting a shock of ‘lion-like’ hair, joined his present employer, Mito HollyHock, in the year 1999.

That’s a good while back. In fact, it’s in the previous millennium. Ricky Martin’s ‘Livin’ La Vida Loca’ was top of the UK charts, and Lance Armstrong was about to win his first Tour de France.

At the time, 22-year-old Homma had just spent four seasons unable to make the first team at Urawa Red Diamonds in the J1 League.

Since moving to Mito, he’s never looked back. Now one of the longest-serving professional footballers on the planet, 44-year-old Homma has become a cult hero in Japan, amassing nearly 600 appearances for his team across four different decades.

Think of a particularly long-serving player for your team — a one-club man, perhaps — and what they mean to your club.

Those are all fair descriptions, but Koji Homma probably outdoes them all. That’s because the veteran goalkeeper has played for Mito HollyHock for literally their entire existence as a J2 League club.

When Homma signed for Mito in 1999, the club still played in the Japan Football League, outside of the professional pyramid. But in the year 2000 they were admitted to the J2 League, where they — and Homma — have competed ever since. Everything Mito HollyHock have done, Koji Homma has done with them.

More than that, since their union in ’99, both Homma and his team have shared a common goal: prevent the other team from scoring at all costs.

Mito’s lowly status in their early J2 years saw them adopt a highly defensive approach dubbed ‘Mito-nachio’: a play on both the Italian ‘Catenaccio’ philosophy and a famous Mito soybean delicacy called ‘natto’.

It made Homma, the last line of that stubborn defence, something of a star.

Mito have since outgrown that style, but they have remained a perennial underdog, somehow avoiding either promotion or relegation across 21 seasons.

That remarkable consistency has allowed Homma to become not only an icon of Mito, but of the J2 League, becoming its record appearance maker with 575 games to date, and the only player to have surpassed 500.

It goes without saying that we don’t get much J2 League coverage in Europe, so there’s not exactly a trove of English-language information about Koji Homma out there.

However, the things we do know give us a moderately clear picture of his character.

The Mito HollyHock website tells us that Homma’s favourite artists are the Black Eyed Peas and British prog rock band King Crimson. His favourite hobby is reading, he enjoys his natto with rice, and he wears Mizuno boots.

If he had to compare himself to an animal, it would be a lion.

But you can probably learn more about Homma’s character from his absurd playing record than from whether he has Elephunk in his CD changer.

At 44, Homma is no longer Mito’s first-choice goalkeeper. That’s understandable. But he did hold that position for an incredible 17 and a half seasons, until he was about 40. He’s only made sporadic appearances since 2016, but he’s kept the No.1 jersey and continues to play when called upon.

It’s no wonder he’s held in high regard.

In fact, Homma’s standing among fans is clear to see. On 27 September 2020, the veteran made his first appearance in two years and four months, helping his side to a 3-1 win over Thespakusatsu Gunma.

So exciting was the occasion, some fans (like this Rolex-wearing lad below) travelled from far and wide to see the man, then 43, back in action.

Joy even in the midst of pain

A lot has changed since Koji Homma made his debut for Mito HollyHock.

Ricky Martin no longer tops the UK charts, and Lance Armstrong is no longer held in especially high regard by the cycling world. In 2017, Fergie’s stint with the Black Eyed Peas ended after 15 years — seven short of Homma’s time with Mito.

Yet throughout decades of significant political and cultural change, Homma has somehow sidestepped the passing of time.

He played in a friendly against his former club, Urawa Red Diamonds, less than a month ago.

Of course, like Fergie’s tenure with her platinum-selling group, all good things must come to an end. But there has been no indication that Homma wants to end his journey just yet.

Despite the arrival of another ‘keeper in January, the club stalwart signed a one-year contract extension that same month. “It seems that the difficult [Covid] situation will continue,” he said, “but I think there will be joy even in the midst of pain.”

If Homma makes just a few more J2 League appearances, that joy will be uncontainable.