What’s it like to be the world’s leading Sven-Goran Eriksson impersonator? 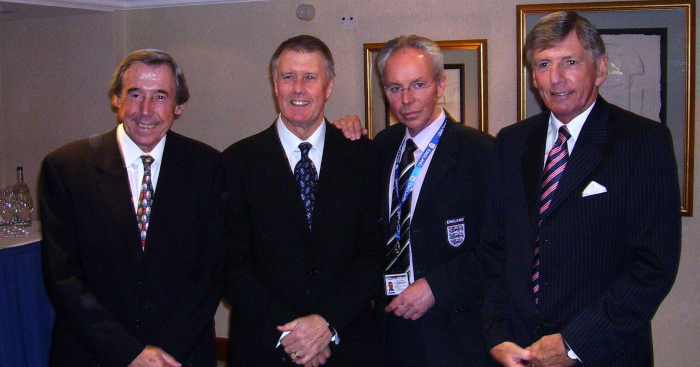 Sometimes you choose the work; sometimes the work chooses you.

For Derek Williams, a British sales director for an international tool and machinery manufacturer, the constant catcalls of, “Sven, you’re a legend!” became impossible to ignore.

The year was 2002. Sven-Goran Eriksson was a year into his role as England manager, riding a wave of positivity after thrashing Germany and securing World Cup qualification.

As he soon realised, Williams shared some physical traits with the Swede.

“I was mistaken for Sven when returning to the UK from 16 months working in Sydney, Australia, and was constantly accosted for selfies,” he says.

“As my hair receded and my side parting became redundant I combed it straight back — long before my face became mistaken for Sven.”

On one occasion, Williams was waiting in a shopping centre while his wife, Jackie, went to pick up some things. When she returned, there was a queue of 20 people waiting for a selfie with their beloved ‘Sven’.

But what could he do about it? Shoo away the hordes of England supporters every day? Shave his head? What if, instead, he tried to make the most of it?

“My wife was ‘nagging’ me to do something about it,” Williams says. “She thought it could be ‘fun’ and ‘make some pocket money’.”

After some consideration, Williams asked one of his sons to take some headshots, which he then sent to Fake Faces, a national talent agency for lookalikes. His expectations were not especially high.

Within an hour, the phone was ringing. A quick interview took place, a six-week tour of T-Mobile shops was arranged, and ‘Svenalike’ was born.

“That was my first true taste of celebrity and caused me to take the business seriously,” Williams explains. “I spent the next three months trying to perfect some sort of ‘act’ and a better impersonation of Sven.”

With the real Sven-Goran Eriksson now a bona fide national sensation, Williams was flooded with opportunities. He perfected the Swede’s whispered, choppy mannerisms, formed bonds with other lookalikes and kitted himself out with Sven gear.

“In the early years I only needed glasses for reading, but since Sven wore his full time I was always peering over the top for distance viewing — but he often did that also, so it wasn’t a drawback.”

The look would eventually pay for itself.

“After doing a photoshoot assignment for Dollond & Aitchison the opticians in 2008, they gave me a free glasses sponsorship.”

It wasn’t long before ‘Svenalike’ became a minor celebrity in his own right, appearing on TV and at various functions.

“My several appearances on GMTV included being taken for the real thing by dear Barbara Windsor. Her big hug and a ‘ello, darling!’ was a bit special!”

Williams appeared on chat shows, worked on Children in Need three years in a row and appeared at Celebrity Soccer Six tournaments, where he socialised with a motley crew of mid-2000s grandees: actors from Hollyoaks, Coronation Street and The Bill, and musicians like Liberty X and Son of Dork, the side project of the mousey-looking one from Busted.

In the run-up to the 2006 World Cup, two years after Williams had left his full-time job to concentrate on ‘Svenalike’, he was getting engagements every single day.

The world at your feet

A fortuitous meeting took place during that period.

At the weekend-long Celebrity Soccer Sixes World Cup in Birmingham in May 2006, Williams was seated next to British crooner Tony Christie, who was then enjoying a second wave of fame thanks to Peter Kay’s championing of ‘(Is This The Way To) Amarillo’.

Christie and ‘Svenalike’ had something in common: both had been working on novelty singles for the World Cup.

Christie had reworked ‘Amarillo’ into the gaudy ‘(Is This the Way to) The World Cup’, while Williams had played Sven in several music videos, the most successful of which was’“Who Do You Think You Are Kidding Jurgen Klinsmann?’, a vaguely Faragean anthem spawned by a competition in The Sun.

The song was a lyrical reshuffle of ‘Who Do You Think You Are Kidding Mr Hitler?’ from Dad’s Army and featured vocals from the TV show’s Bill Pertwee, as well as — strangely — boxer Frank Bruno and two legends of the 1966 World Cup: Geoff Hurst and Martin Peters.

That level of networking was a pretty serious perk to being ‘Sven’.

“I spent time with the heroes of ‘66 during the filming of that video and spent the whole evening with them for a charity dinner in support of the Bobby Moore Fund for Cancer Research some time later,” Williams says.

Tony Christie was more guarded. “I’ve seen the video which is very good, but it’s a bit un-PC,” said the singer. “The original song had the lyric ‘Mr Hitler’ and to change it to Jurgen Klinsmann…I’m not sure that’s wise. I would steer clear of it personally.”

“I had a phone call from a leading member of the England supporters club asking me to lead their ‘Save our Sven’ march and campaign, but I didn’t think it would do any good or be appropriate,” Williams says.

That might have seemed like a logical end point for ‘Svenalike’, but Williams actually enjoyed his biggest moment in the spotlight some two years later.

In 2008, after Sven was appointed manager of the Mexican national team, a large Mexican media group got in touch for a project: “One week of filming and photo calls in and around Mexico City for a decent fee, all expenses paid, and accommodation in a good hotel.”

How could he refuse?

The very first assignment in Mexico was to “gatecrash” the Estadio Olimpico Universitario, home of the reigning Mexican champions, Pumas, and to watch a training session as though ‘Sven’ was scouting players for the national squad.

“This did not sound like it had many possibilities for entertaining TV, but I didn’t at that time realise the significance of football to the Mexican media and public,” Williams says.

“My entourage included two glamour models flown up from Peru to act as my secretary and interpreter, and we arrived [at the stadium] in our large bulletproof SUV, to the increasing nervousness of my employer’s representative and the rest of them.”

For ‘Svenalike’, however, this was business as usual.

“Having had much experience of walking unchallenged into UK football stadia – in which I had legitimate business for an appearance – I instructed my little party to walk slowly, look like you own the place and keep chatting.

“The two security guards on the gate sprang instantly into action and opened the gate for us without any questions asked, and we sauntered across the large car park into the Olympic stadium itself.”

However, when Williams and his entourage got inside, they discovered more than just the Pumas squad. The stadium was full of reporters.

“It appeared to me that the best ploy at that stage was to take a moment to let the club officials notice the visitors and gauge their reaction. It was pretty immediate with all the TV cameras swinging in my direction.

“A welcoming committee led us down to the pitchside and invited me into their technical area; the Pumas officials were charming and the head coach very welcoming.”

In fact, the respect was mutual. When Ricardo Ferretti, the Pumas manager, discovered Williams’ true identity later on, he wasn’t angry at all.

“To be honest, I was quite amused,” Ferretti said. “The fake Eriksson told me he was watching my players ahead of his next call-ups, and I believed him.”

After meeting the club staff, Williams and his crew headed for the exits, but they were cut off by a mob of press.

“I was in two minds on what to do next but gave a brief and noncommittal press conference saying how much I was enjoying Mexico and how I had high hopes for the national team, not once claiming that I was anything other than me.”

One duped Italian reporter told his employers about ‘Sven’ and the press conference, only to be informed that Sven was in fact in the USA.

Not wanting to lose his scoop, the reporter made up a story about Williams forging documents to get into the stadium. This led to a great deal of confusion and made headlines around the world.

Although the accusation of forgery wasn’t true — and despite Williams’ team calling Pumas to explain what had happened — the Mexican FA was sufficiently embarrassed to put out an official statement.

“The real Eriksson is in the United States at the moment, and the character who has been claiming to be him is just a ringer,” it said. “[Williams] has carried himself with a total lack of respect.”

Now 69 years old — three years Sven’s junior — Williams looks back fondly on his time as ‘Svenalike’ and everything that has come since.

“I had two years as a chauffeur driving classic Rolls Royce cars for weddings when the phone finally stopped ringing for Sven gigs, and for the past five years I have been joined in happy retirement by my wife,” he says.

So would he recommend the life of an impersonator to, let’s say, a Gareth Southgate lookalike?

“I had such amazing luck and was treated like a real star for a while, with my own on-location trailer filming Goal 3 and invitations to Hello magazine parties and functions. So it possibly doesn’t compare with celebrity doubles for people not so well known and liked as Sven.

“I know of at least two lookalike celebrity doubles for whom appearing in public was a nightmare they undertook only with the aid of medication.”

It might have taken groups of camera-waving fans (and his wife) to convince him to become Sven, but Williams needed no such incentive to play the role wholeheartedly.

“I enjoyed every moment.”