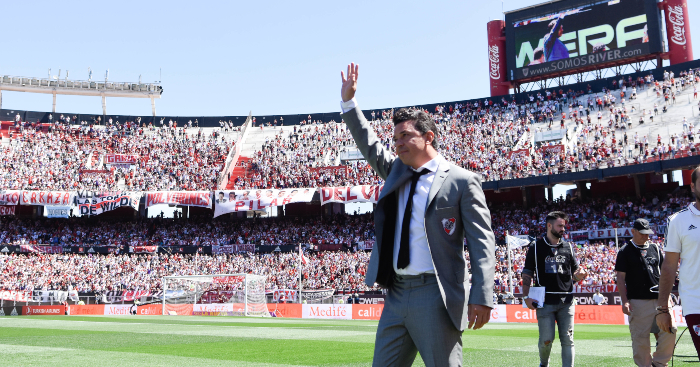 Marcelo Gallardo’s expression and body language said all that needed to be said. Eyes to the floor, cheeks puffed out, left hand on hip; it was not a face of total devastation but of deflation, a man feeling the emptiness that came from knowing how close he had been.

Gallardo’s River Plate had a hand on the Superliga trophy and had let it slip. To make the pain even sharper, it had gone to their bitter rivals Boca Juniors on a heart-wrenching final day of the season.

It seems an age ago, but it is only eight months. March 2020: an away trip to face Atletico Tucuman, the last game in Argentina before the country and its football shut down for the pandemic.

River Plate went into the last game of the season a point ahead of Boca, so a win would guarantee the league title. Oddly, the league is the one trophy that still eluded Gallardo as manager. It was, then, the perfect chance to complete the set.

But River went behind early on and, despite equalising 10 minutes before half time, they could not find the goal to make them champions.

Three penalty shouts were waved away, two chances flew past the target and a goal was ruled out for the narrowest of offsides. A Carlos Tevez effort handed Boca a win over Diego Maradona’s Gimnasia side back in Buenos Aires, and Boca took the title.

It was not to be for Gallardo and, having also lost in extra-time of the Copa Libertadores final in December 2019, completed a painful few months. Still, it was not enough to stain his reputation.

Gallardo has now been manager of the great Buenos Aires club for six years, overseeing more than 200 games and winning and winning quite literally everything else: a Copa Sudamericana, two Libertadores, three Copas Argentinas and a handful of supercups.

Those successes have led to him becoming one of the most sought-after coaches in the world game, the next great managerial hope of a country that has made a habit of producing formidable coaching talent. 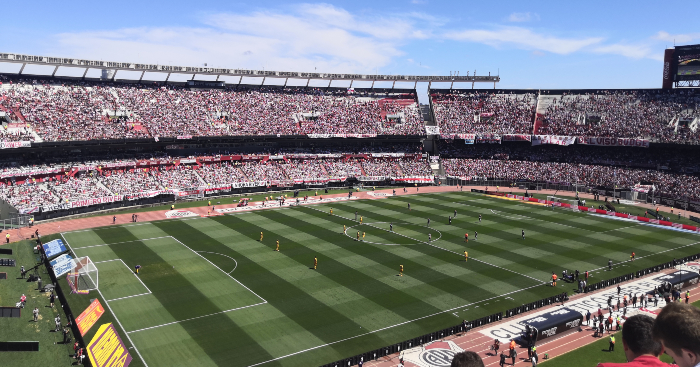 Indeed, more surprising than the fact that six such successful years at River have not brought a league title is that Gallardo remains at the Estadio Monumental.

In Argentinian football, six-year reigns are unheard of. If success does not come, the sack inevitably will. If it does, then there will likely be offers to move to Europe – most often from La Liga.

It is a path followed by many, including Diego Simeone, one of Gallardo’s predecessors in the River hotseat, and, most recently, Eduardo Coudet, who took Racing Club to the Superliga title in 2019 and after a short spell in Brazil with Internacional was recently snapped up by Celta Vigo.

Gallardo has not shortage of admirers. Last year, Pep Guardiola was emphatic in his praise on Argentine television. “What Gallardo has done with River is incredible,” the City boss said. “Every year three coaches are named as the best in the world, and he’s never among them.

“I can’t understand it. It’s as if there’s nothing else in the world apart from Europe.”

And Simeone’s son Giovanni, who was managed by Gallardo at River as a youngster, said that he had “never seen” a coach with “the desire to win” possessed by his father’s former international team-mate.

As well as that desire, Gallardo is tactically flexible, regularly switching between formations and able to come up with solutions for specific games, which perhaps explains his success in knockout football. Additionally, he has proved himself capable of constantly rebuilding his side as his best players are whisked off by Europe’s elite.

Gallardo was strongly linked with Barcelona at the end of last year but quickly moved to quash the talk, saying that he “never had doubts” about staying. The question of when – and it surely is ‘when’, rather than ‘if’ – he moves to Europe remains up in the air, then.

Now, after a six-month break that was enforced by Argentina’s strong lockdown, Gallardo is back on the trophy trail.

Domestically, he is currently occupied by the Copa Diego Armando Maradona, a shorter format tournament that was devised to replace the league in this truncated, coronavirus-afflicted season and was recently renamed to honour El Diego.

Though it is not exactly a league title on offer, one imagines Gallardo will be desperate to take the silverware. And after qualifying for the second phase over the weekend – a 3-1 victory over Godoy Cruz making it five wins in a row in the tournament – his team is still on track to do so.

River are also in the quarter-finals of the Libertadores, the two legs of which will take place this week and next. Coming up against Gallardo’s old club, reigning Uruguayan champions Nacional, River will be looking to make it to a remarkable fifth semi-final on the trot.

If he can lay his hands on either or both of those trophies – the finals will be in mid and late January – then he may feel that he has taken River as far as possible and the time has come to close the current chapter of his career.

Owing to circumstance – and possibly to his failure to win a league title with River – he is unlikely to get one of Spain’s biggest jobs immediately. Barcelona look set to replace Ronald Koeman with Xavi, Simeone has a firm grip at Atletico and it seems unlikely that Real Madrid would go for someone untested in Europe if they do fire Zinedine Zidane.

Yet Gallardo appears perfectly suited to the tier of clubs just below that. In May his former assistant Rodrigo Sbroglia claimed to TNT that Gallardo “is a coach capable of taking Sevilla and dethroning Real Madrid and Barcelona”.

It is a bold claim, but with his record at River it is hard to imagine that Gallardo will not eventually make his mark abroad.