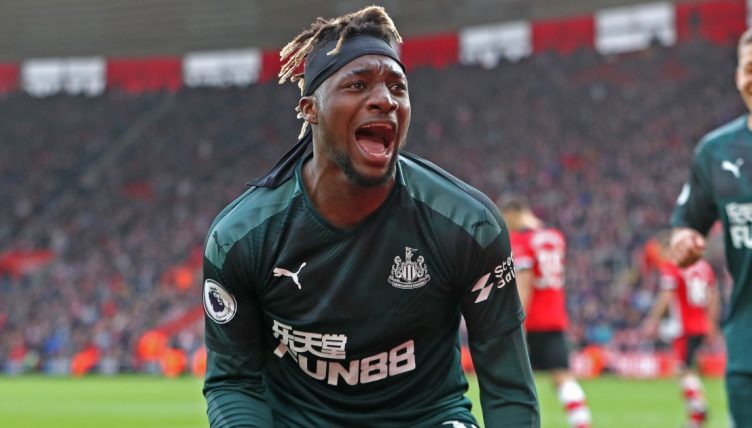 In a football world obsessed with stats and rigid structures, Allan Saint-Maximin is one of the game’s truest, freest entertainers.

Impossible not to like, the 24-year-old Newcastle United winger has been a joy to watch ever since he arrived in Tyneside just over two years ago.

On the pitch he is an artist, his mazy runs around defenders paint masterpieces that rival the French classics. With his headband on, the ball is his brush and the pitches of England are his canvases.

Off the field he is a comedian; his jokes, especially when Sunderland are the subject, ascend him beyond the status of cult hero to Sainthood at St James’ Park. And his touching tributes to his former manager Steve Bruce show that he is a man with his heart in the right place as well as his head.

Born in Paris, Saint-Maximin was picked up by the Saint-Etienne academy. He made a handful of appearances for the first team before Monaco came calling. The Monegasque then loaned him out to Bundesliga side Hannover 96 where he made 16 league appearances with only one goal to his name.

The 2016-17 season brought with it another loan move, this time to Bastia in Ligue 1 where the first signs of the player he could become shone through. He scored three and assisted three in the league in a side which finished dead bottom of the table, catching the eye of Nice, who signed him the following summer.

Over two seasons with Les Aiglons, Saint-Maximin established himself as one of the most exciting talents in France. He played his first games in Europe and notched 10 direct goal contributions for the first time in his career.

Despite a poor relationship between Vieira and Saint-Maximin, the winger would achieve five league goals and six league assists over the course of the following season to better his previous year’s haul.

Allan Saint-Maximin, that is special! 😎

From deep in his own half…to the opposition's goal ⚡️

Nice have some player on their hands! pic.twitter.com/HaKhLJyVp0

But Viera believed Saint-Maximin did not have the attitude to go any further, saying he did not believe the young wide man would work hard enough to develop his game.

So when Newcastle came calling, Vieira sanctioned a move for Saint-Maximin, who headed to Tyneside for a reported fee of just £16.5million.

Newcastle’s history with signing players from Ligue 1 is perhaps best described as a mixed bag. While there were once clear success stories like Yohan Cabaye, Hatem Ben Arfa and Moussa Sissoko, recent years have taken some far less illustrious Frenchmen to Tyneside.

Florian Thauvin arrived from Marseille in 2015 and went straight back there on loan in January 2016. Likewise, Sylvain Marveaux failed to impress whilst on high wages and would later return to France. And the less said about Romain Amalfitano the better.

So there was some concern at St James Park that the signing of Saint-Maximin would follow in the footsteps of some of his less effective compatriots, that the French winger would not adapt to or enjoy life in Newcastle. To put it mildly, the complete opposite has been true.

It probably all started with his headband. The Frenchman began the season playing in a Gucci headband that caught the attention of… well, everyone.

It was hard not to appreciate it because not only is the idea of playing football in a Gucci headband ridiculous, it also undeniably suited him. Whilst he was forced to cover up the brand, he carried on wearing the accessory and it has become synonymous with him.

On the pitch, he backs up his style with his footballing ability. Saint-Maximin has been a shining light amidst the darkness cast by the all-too-often bleak performances put out by Newcastle over the past two years.

With the side almost always penned back by the opposition, Saint-Maximin quickly became a fan favourite as he chased after every ball sent his way and his tenacious, technically brilliant driving runs offered the Magpies something going forward when they would otherwise have had nothing.

In his first season in English football, he managed four goals and seven assists across the Premier League and FA Cup, including the winning goal against Southampton in March 2020 and a hat-trick of assists against Bournemouth in July.

Those were impressive numbers for a man new to English football and in a Newcastle side that were threatened by relegation. He continued that form into last season, achieving seven goal contributions in the Premier League alone.

But to base his performances on numbers alone would be to misunderstand him – for Saint-Maximin is one of those players for whom statistics do not tell the complete story.

His numbers are good but watching him in a match brings a joy that cannot be simply quantified. You could analyse his xG and his xA, but there is no ‘xExcitement’.

Every opportunity he gets to go forward he does so, manipulating the ball between, around and over defenders in a relentless pursuit to drag his team forward.

But don’t mistake his dribbles forward as greed, his efforts are solely for the team and once he feels he cannot go further he immediately looks to move the ball on to a team-mate, although he often finds himself isolated as Newcastle’s only forward player.

His dribbling has seen him often take on a unique role as a hold-up player that relies primarily on his technical ability rather than his physicality, holding onto the ball by dribbling around the defenders until his team can join him in the attacking third.

Saint-Maximin is one of those unique players who come from outside a club or city and simply ‘get’ a place. Just as Cantona understood Manchester and adopted it as his home, it is clear Saint-Maximin ‘gets’ Newcastle and its fans and they in turn adore him.

“It was a really good connection,” told NUFC TV following the return of fans at St. James’ this season. “That’s why I decided to stay at Newcastle for the love they give me. The support they give me and they deserve more to be honest.

“That’s why you know, last season without supporters it was a long time. Every goal I scored I couldn’t celebrate with the supporters so, I really feel in my head, you have to score quick to go and see the crowd.”

From his jokes on social media at the expense of bitter rivals Sunderland to his performances on the pitch where he plays with his heart on his sleeve, Saint-Maximin has risen to the status of cult hero on Tyneside and become a true saint at St James’ Park.

Newcastle’s signing of ASM’s brickie mate is straight from a ‘Goal!’ script