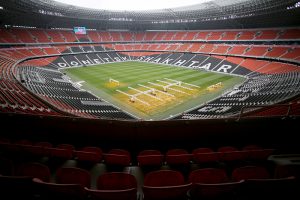 A general view shows the Donbass Arena Stadium in Donetsk on April 18, 2017.
In its halcyon days, the Donbass Arena in eastern Ukraine was a gleaming temple to football, welcoming some of the sport’s biggest names through its portals. But while star players are now lining up in the Confederations Cup tournament across the border in Russia, the Arena is wasting away. Seized by insurgents waging a bloody three-year conflict against Kiev, the venue is in a state of pitiful decline. / AFP PHOTO / Aleksey FILIPPOV (Photo credit should read ALEKSEY FILIPPOV/AFP/Getty Images)