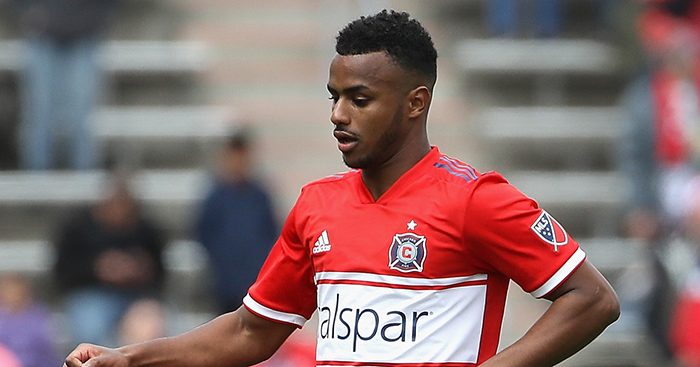 Nothing worth having comes easy. It’s a motto that Mo Adams lives by. And having gone from Eritrea to America, via 12 formative years in England, he’s certainly taken the long road to becoming a professional footballer.

There were many hurdles to overcome along the way, including rejection, injury and disillusionment, but he never lost that steely determination to make his dreams come true.

Now preparing for his second season with Chicago Fire in MLS, he’s well on his way to doing exactly that.

That determination is something his family shares, moving him from north-east Africa to Nottingham when he was eight.

“We moved for a better life,” Adams says. “Better education, and the chance to build a better future. It was a moment where we had to leave Africa to pursue something bigger.

“Thankfully I believe I’m doing that. Without moving to the UK I don’t think I’d have the opportunity to be in the position that I am today. Not just me, my siblings and my parents too.”

We are all @_moadams 😂 #cf97 pic.twitter.com/irVlYSF7tS

Not that Adams’ parents had a football career in mind for their son when they first took the decision to move.

“Growing up in Africa, football is pretty much worshipped, but I was just playing for fun,” Adams says. “When I got to England was when I started to take it seriously.

“I joined the school team, then played for the district, and when I was 10 years old I got scouted by Nottingham Forest.”

At the age of 15, Adams was offered a scholarship by the club but turned it down in favour of joining their local rivals Derby County. Considering the progress of Mason Bennett and Will Hughes among others, he saw a clearer path to the first team.

However, he was released after two years having not been offered a professional contract.

A trial at Blackburn Rovers followed, and Adams was on the cusp of signing for them until a bad tackle in training snapped his ankle ligaments and, devastatingly, the offer was withdrawn.

He had to look elsewhere, further down the ladder, spending a brief spell at Boston United in the Conference North.

“I played a few games there,” Adams says, “but it’s tough when you’re trying to make a career in the game and there are guys who are maybe playing for fun.

With creeping doubts about the route he’d taken in joining Boston, Adams was forced to reassess.

While at the Derby County academy he’d been introduced to a few agencies that helped arrange university scholarships in America for promising young footballers.

Adams signed with Vertex Soccer and took part in a showcase game that ended with several scouts looking to recruit him. He decided Syracuse University was the best option.

🍊 Fact: Syracuse is the only school in the nation to have at least one player sign a Generation adidas contract in each of the last five years. The 5⃣signees are the most for any program in the country during that span. 👏👊#DareToDream pic.twitter.com/ie5PrT1V7Q

“My main goal, even going to university, was to become a professional soccer player,” he says.

“A few years before I went they had two players who left for Generation Adidas (a programme that enables players who haven’t graduated to enter the MLS draft early).

“Not once in my mind did I think I was going to spend four years there. I wanted to leave after two.

“Having that mentality helped me, and having a coach like Ian McIntyre, who was going to push me every day to pursue my goals, was important. He understood how much I wanted to be a professional.”

Taking inspiration from Dom Dwyer, and other players who’d been released by English clubs only to reignite their ambitions via playing college football in America, Adams remained focused on his goal and trained ferociously to make it happen.

At the end of two years at Syracuse he had the much-coveted Generation Adidas contract and a place in the 2018 MLS draft.

Even now, as Adams reflects on a successful first season with Chicago Fire, during which he made 16 appearances, he knows there’s more work to be done.

A commanding midfielder who likes to break up play and drive forward with the ball, he’s keen to develop the attacking side of his game this season and become a regular starter.

“It’s tough for any rookie to come into the league and get valuable game time,” he says. “First and foremost you have to gain the trust of your coach and team-mates. For me to be able to do that and play meaningful minutes in big games has been a bonus.

“I wanted to come in and play, and having that mentality to compete from day one has obviously helped me.

“Having that edge was vital, but I don’t want to get carried away. It’s just one season and there are plenty more to go. I’m hungrier and I know what I need to work on. It’s a process, but I’m excited about it.”

Adams was the 10th overall pick in the MLS draft when he joined Chicago. He had never even been to the city before, but soon he was set up in a new place and starting pre-season with his new team-mates – including World Cup winner Bastian Schweinsteiger.

“It’s unreal,” Adams says. “That was the first thing that came into my mind when I was drafted.

“He was someone who I idolised when I was growing up, and when he was at Manchester United I went to watch a few games. Not once did I think I was going to call him my team-mate.

“It’s a dream come true. He’s someone who’s achieved everything you can achieve in the world of soccer, but he’s so humble and willing to pass information on. Every day in training there’s something you can pick up and learn from him.”

Sharing the pitch with such a decorated player as Schweinsteiger, who picked up 121 international caps for Germany and collected 16 major trophies with Bayern Munich, helps to bring home the change in Adams’ circumstances over recent years.

From struggling to get off the substitutes’ bench during dark days at Boston United to starting big games in front of thousands of supporters, he’s made huge strides in a short space of time.

Max Lowe was one of only three players in Adams’ age group at Derby County offered a contract, but he continues to demonstrate that, however painful it may be, rejection as an 18-year-old doesn’t have to be the end.

There are other ways to carve out a career in football. At 22, Adams’ is still in its infancy, with lots more to look forward to.

“People in the UK don’t necessarily give MLS as much credit as it deserves,” he says. “The standard is a lot better than they might think. You can see that with the players coming into the league and the new franchises like Atlanta.

“The intensity of the game is a lot higher than in college and it’s much more physical. I’m going to be much better prepared for that going into my second year.

“I don’t like to look too far ahead. My short-term ambitions are to try to cement a starting spot in the team this season and establish myself as an MLS player.

“My ultimate goal in my career is to play in Europe and that’s definitely something I’m hoping to do one day.”