The story of Paul Robinson, the man Gullit played instead of Alan Shearer 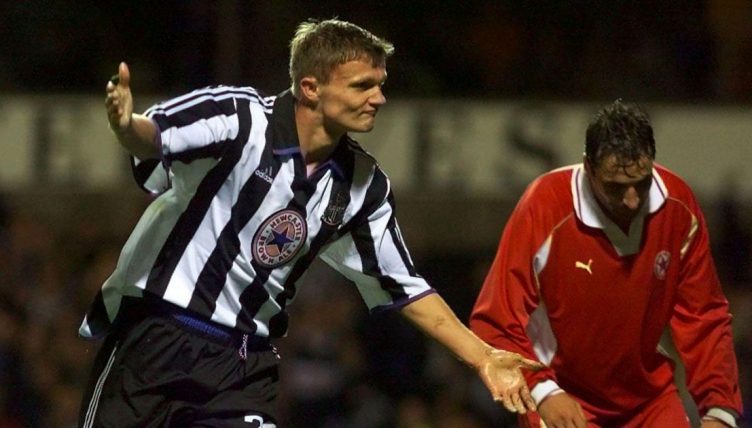 Paul Robinson would be the first to admit he isn’t the most famous player to ever pull on a Newcastle United shirt, but his story is well known to many.

He is the 20-year-old who started ahead of Alan Shearer in the Tyne-Wear derby of September 1999, when the England captain was infamously dropped by Ruud Gullit.

Shearer and his manager at the time didn’t see eye to eye, and a 2-1 win for Sunderland at St James’ Park probably saved the England striker’s Newcastle career. Conversely, it ended Gullit’s. He resigned days later, with the club in the relegation zone, to be replaced by Bobby Robson.

It could all have been so different. Robinson played in Kieron Dyer for the opening goal on the day, and the Sunderland-born striker believes he earned his start against the club he and his family supported.

“I’ll always say it was 1-0 when I came off!” he jokes. “I’m a very confident lad. To this day I think I deserved to start, whether it was in front of Alan, Dunc [Duncan Ferguson] or anyone else.

“Alan got sent off against Aston Villa in the first game of the season, I started against Wimbledon when he was suspended and got man of the match.

“It was a Tuesday or Wednesday game and the day before we were working on the shape. I’m on one team, Alan and Dunc are on the other side. I got pulled aside to be told I’d be starting and I wasn’t bothered. I thought, ‘I played well on Saturday, why shouldn’t I be playing?’

“But it was quite hard being booed by your family members at the far end of the stadium and half the Newcastle fans!” 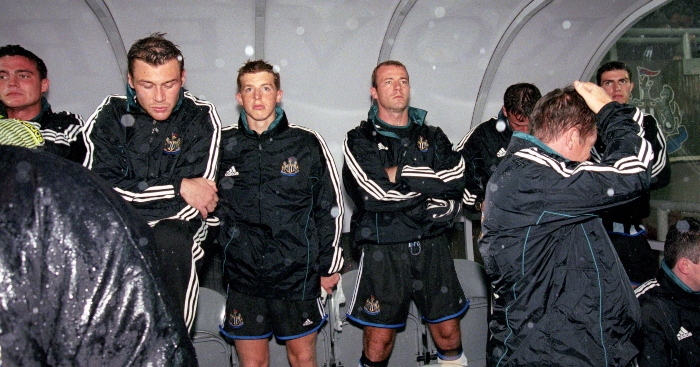 Robinson can’t speak highly enough of Shearer, who, despite seething at his snub from Gullit, wanted nothing more than three points on that rainy Tyneside night. It didn’t take long for the fall-out to boil over, and it soon became clear the Dutchman’s position was untenable.

“I set the goal up, played well and turned the crowd. At half-time, everyone, including Alan and Dunc, was saying we had to kick on, get a second.

“Regardless of anything, Alan was a professional, a Geordie through and through. He could have gone to Manchester United or Barcelona, but he’d come back home to win something for his club. In all the years I’ve been alive, he is the best English centre-forward I’ve seen.”

“He was fantastic for me and he gave me a slap on the head after the game to say ‘well done’. Obviously I didn’t see what was happening with Gullit because I was in the team and focused, but in the background it was simmering. I kept my head down, working to get picked for the next game, but you could sense something wasn’t right.”

“I got a call when I was driving home after the game from my dad. He asked if I’d seen Match Of The Day. When I saw his interview, it hit home and I thought Gullit was done. He was saying I’d played fantastically and it all changed when he brought Shearer and Ferguson on. It was good for me, but he was putting me up against them two.”

He may have grown up dreaming of wearing red and white rather than black and white, but once he made the move to Newcastle from Darlington in 1998, Robinson was focused on his job – although he does admit it was tough for some of his family to accept his new allegiance.

“I’d played for Sunderland boys, and I went for trials only to be told I had all the talent in the world but was too small. They had lots of chances to sign me when I was 14 or 15, and I heard they were interested in my final year at Newcastle, but I ended up signing for Wimbledon.

“I just wanted to play football and Newcastle were in the Premier League. You just can’t turn that down, can you?

“My family were over the moon I’d gone from Darlington in the third division to the Prem, but they’re all massively passionate about Sunderland. We played Sunderland reserves in a game at Kingston Park; my older brother and dad were there and I scored an absolute worldie.

“After the game, I saw my dad and said, ‘Where’s Chris?’ He told me, ‘He left after you scored’; he’d stood up, clapped, walked down the stand, got in his car and gone home! He had his Sunderland shirt under his jacket!

“I don’t think they were that bothered [about the Newcastle move], but obviously I did get a bit of grief for setting Kieron up in the derby. I said I wouldn’t celebrate, but when it went in I went nuts. I wanted to batter them!”

Robson’s arrival gave an instant lift to the squad, and it was much needed. Robinson says he did wonders for him in the few months they had together, but there was one noticeable change from the moment Gullit left and the former England boss came in.

“He was England captain. Obviously nobody is bigger than the club, and he didn’t make decisions or anything like that, but he owned the dressing room. Not in a bad way, everybody loved him, and you knew that if he was happy, he was getting you one, two or three goals a game.”

In Robson’s first home game, Shearer scored five as Newcastle beat Sheffield Wednesday 8-0. Robinson, who never scored in the Premier League for the Magpies, laughs that Shearer told him where to go when he asked to take a penalty to complete the rout.

“I’ve gone down for the penalty and I’ve taken a dive. I picked the ball up and said, ‘Can I have it to get my first goal? You’ve already scored four.’ He says, ‘No.’

“When he scored, the first person he dived on was me, and he called me a cheeky b*stard. It was banter, but I was desperate to score; it was a free shot at goal. Knowing my luck, I’d have missed anyway.”

One of Robson’s greatest qualities was his ability to keep a player’s morale up even when telling them off. Robinson had first-hand experience of that after hitting the headlines for the wrong reasons.

“I did an interview in the paper, and the way I was, I thought everyone was my mate so I told the reporter everything. The next day, I knocked on the door and Bobby points at the back page and just says, ‘What’s that?’ I’d mentioned his name, saying I wasn’t getting given a chance, but it was spun in a bad way, blaming him. What I’d done was bad.

“He said, ‘I agreed you’re not like that, but what I need you to do is stop speaking to them, you’re banned.’ But he started laughing, so I left his office thinking, ‘Have I been b*llocked there? What just happened?’

“He was unbelievable for the football club, brought the structure back after Gullit upset a few people. He was amazing.”

No regrets but one

Robinson says that, if he could have his time again, he wouldn’t have left Newcastle for Wimbledon in 2000. The move to London signalled a decline in his career from which, he admits, he never recovered.

“I wouldn’t say I blamed Bobby for me leaving, it was more my attitude at the time,” Robinson says. “He needed to get quick results and that meant playing senior players like Alan, Dunc and Rob Lee. I was third or fourth in the pecking order up front and felt pushed back, but as I got older I understood.

“It was a rash decision looking back, but I take full responsibility. There was a contract on the table for another three or four years, but I was a young kid and I wanted to play football. My head was turned by money as well. Without doubt, it was the worst decision of my full footballing career.”

After 24 games for Newcastle, Robinson spent three years and played just four league games at Wimbledon before spells at Blackpool, Hartlepool United and York City. His professional career ended in 2006 at Torquay United, but he continued playing semi-professionally until 2016 for no fewer than 15 different clubs.

His own take on why it never quite worked out is quite philosophical, freely acknowledging his mental health became an issue. Loneliness and too much too young were part of the problem, and injuries didn’t help either.

“It was my own stupid fault,” he says. “Sitting by myself in a flat down in London with money in the bank, nothing to do, no friends, no family, it was a very lonely time in my life. If I didn’t knock it on the head down there, I don’t know what state I’d be in.

“I came home and had five months out, my agent was telling me clubs were interested but I said I was done. I wasn’t enjoying football. But I went to Blackpool and started feeling good, then at Hartlepool they wanted to see if I was hungry before offering me something.

“In the first six games of the season, I was top scorer with nine goals, and then I got injured, came back too early and kept getting little knocks. I thought it wasn’t going to happen and my head went. I was 27 when I retired.”

Having settled down with his wife and three kids, Robinson says he wouldn’t change anything and cherishes the memories he has, even if people don’t remember him as fondly as he would like.

“A couple of years ago, I delivered to this house and after the guy signed for the parcel, he started looking at me funny. I thought there was something on my shirt.

“I don’t regret anything. If things had gone differently, I wouldn’t have met my beautiful wife and had my beautiful kids.

“I’ve done it and got great memories. When Shearer comes on TV, I can always tell my kids, ‘Your dad played with him, you know.'”

This article was originally published in October 2019.

Where are they now? Newcastle’s ‘most promising youngster’ award winners