Ben Nuttall: From being rejected by Birmingham to a world class freestyler 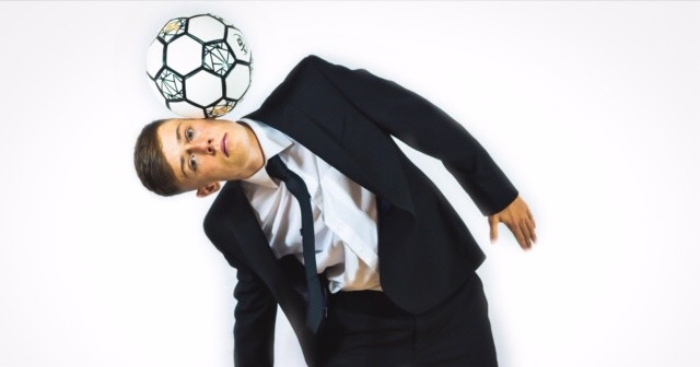 Ben Nuttall is no ordinary 18-year-old. Like many young men, growing up he had a dream and started playing football aged seven, joining Birmingham City around four years later. As normal as that sounds, it was after his stint at their academy that he would see his life, and career prospects, change course completely.

Nowadays, Nuttall is a world class football freestyler, helping attract more interesting to a relatively new sport, which he says has been around for about 20 years. But his story runs much deeper than that; not only is he the holder of three world records and preparing for both the UK and World Championships, as well as performing at high profile events like the Champions League final last year, but he is also using his growing profile to make a difference to those who need help.

His release from the Blues, around two years after joining, was the catalyst for all of that to begin.

“Back when I was 12 or 13, I wanted to be a professional footballer and I wanted to play for Birmingham City,” Nuttall says. “But once I got released, I found a freestyle video online and from that moment I swapped regular football for freestyle football.”

It was an age-old issue that sent him back to the drawing board, but Nuttall dusted himself down quickly and chose a completely different route into the game he loved. He does, though, stress that the two sports are completely different, becoming “hooked” on trying new things and getting better every day.

“Technically, I was good. I had the skills, like step-overs, and could take players on. But I was quite a lot smaller than the other players and got pushed off the ball a lot. My ability would get overshadowed by physicality.

“When I got released I thought I’d get back into it, but I had a lot of free time and stumbled across a video. Obviously I had seen the skills before, but never freestyle as a sport. I started practising the skills from the video in my garden and just got hooked and forgot about regular football.

“They are two completely separate sports. With freestyle, you play on a stage and the objective is to either entertain an audience or outdo your opponent. It is also just you on your own, you don’t have a coach, and that is what I enjoy; whatever you put into it, you get out of it and it is a great way to express yourself.”

From rookie to record holder

Looking at his progress, it is quite a shock to see how far he has come in such a short space of time. Just five years split the end of his football dream and almost reaching the very pinnacle of freestyle, but Nuttall is quick to point out that a lot of hard work has gone in over that time. Only when the offers came in did he consider it as a profession, and he has grown both as a competitor and an entertainer ever since.

“People are surprised when I say it has only been that long, but if you are doing something every single day for hours it is a very long time,” he says.

“I was just training for fun initially and using social media as a platform to share videos. Gradually, I grew my name and got a bit of an audience. Local offers came in, shows and award nights, and at that point, I didn’t even realise I could make money.

“It was a snowball effect and I kept building my profile. With freestyle, if you want to make it, the tricks are one side but the business is another. I do some work with Adidas, Manchester United and I performed at the Champions League final last year.

“I love both sides of it; training is just fun but competitions are important, like the UK Championships and the World Championships. I’m addicted to improvement.”

The crowning achievements of Nuttall’s fledgeling career are the three world records he holds, including the most keepy-ups with a rugby ball in a minute and the most ‘neck passes’ in a minute, which he got last year, and the most football touches while wearing ankle weights in a minute, completed in early March at the Guinness World Record headquarters in London. A testament to his competitive nature and hard work is the fact that he has dwarfed each of the previous standings. 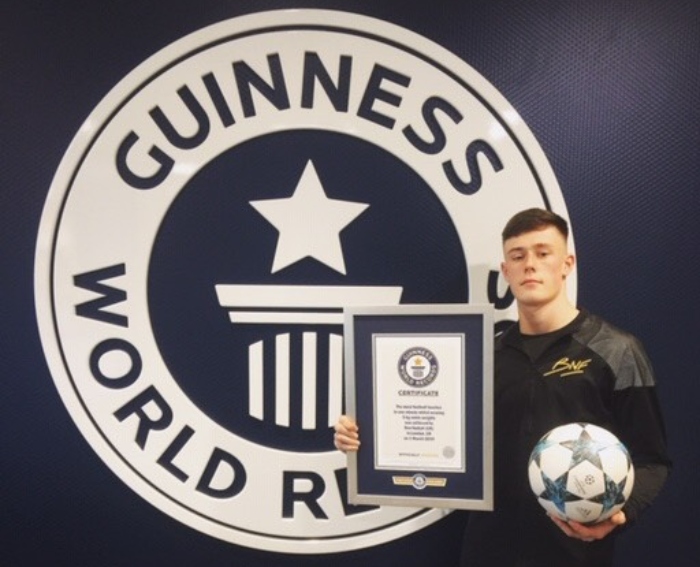 “My favourite out of all my records was the rugby ball one, I think it is the ultimate test of control. The record stood at 60 and I managed to get 187; I could have stopped on 61 but I don’t want to ever be beaten.

“The neck one, I needed a friend to help me; it was more technical. That stood at 20 and we managed to get 41. In the last one, I had two 10 kilogram weights on my ankles; that record was 60 and I managed to get 217. I feel like if I’m going to do these, I need to smash them.”

Nuttall admitted three is a nice round number when it comes to records and will now focus more on the competitions at home and abroad, with the majority of his training gearing up for both championships this summer.

Former Leicester City defender Christian Fuchs organises the UK version alongside Andrew Henderson, holder of both titles and the man behind the video that captivated the young hopeful.

Having gone close but fallen short before, Nuttall is looking to go all the way this time around

“When it comes to the championships, it is a different mindset completely,” he said.

“For records, you train with one trick constantly, but competitions are more varied. Each country has their own, and then they have the worlds, which are split into the rookie and the pro tournaments.

“In the pros, there is a qualification round, which consists of a 45-second routine, to decide the final 16. From there, it is one-on-one for three rounds, 30 seconds each in front of the judges.

“I’ve been in both twice, but the UK one is what I focus on. In 2017 I reached the quarter-final but lost to Andrew Henderson, and last year I got to the semi-final but finished third overall. I’m training hard to win this year, to do that at such a young age would be huge.”

Helping those in need

Not only does Nuttall work hard to showcase his skills to some of football’s biggest names, having performed at Arsenal vs Manchester United in front of Sir Alex Ferguson recently, but he also has taken it upon himself to try and make a difference in his local area.

He says that his professional life has helped him steer away from trouble, but with those he knows going down the wrong path, something needed to be done.

“I’ve done coaching in schools and youth clubs, and a lot of the guys I used to play football with have ended up as young offenders and I was thinking it would be good to do something with that,” he says.

What a chance to go in with one of the Youth Prison Systems here in England to share my journey of how Freestyle Football changed my life. A real honour, and I appreciate their upmost respect and hunger ⚽️🙏😁 #BNFreestyle pic.twitter.com/L0uCRwosW4

“It is just volunteering and I do it for free. I got in contact with people and started working with Derby Youth Offenders’ Service in partnership with the Prince’s Trust.

“I went in there and showed them tricks I do and taught them some, as something to focus on and it was the highlight of their week. My message is having that can help so much; I’m not saying they’ll all be freestylers but their thing could be anything from football, music, photography or whatever.

“Because I’m quite young, I think that helps me because I can relate to them. I was doing stupid things like getting kicked out of school and freestyle took away all distractions. I’ve only been doing it for about six months to a year, but I’m looking to do more.”

Where are they now: Birmingham’s XI which won the 2011 League Cup final