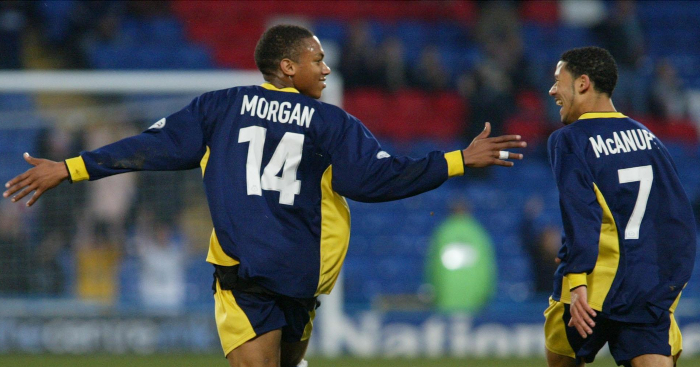 Left wing was a problem position for England for many years. Several options were explored during the early 2000s, but no long-term solution was ever found. In different circumstances, Wimbledon’s Lionel Morgan might well have made the spot his own.

One of the most exciting prospects of his generation, Morgan seemed destined to play for Tottenham, and his country, until injuries intervened, drastically curtailing his career. A potential move to Spurs twice collapsed late on and he retired at the age of just 22.

“I had loads of operations,” says Morgan. “There were so many cleanouts of the knee, so many times I had to go in. After the last big operation I had, the surgeon was brilliant. He’s looked after so many players over the years. He was really honest with me.

“He said, ‘Look, this injury will either end your career now, or it won’t be a long career. You’ve got to think about your knees and your life going forward, not just football.’ It’s the same injury that Ledley King had, but mine was a lot worse.”

By that stage, there was no cartilage in Morgan’s left knee, which couldn’t cope with the demands placed on it by professional football. He had to accept that, through no fault of his own, he wasn’t going to become the player that so many believed he would. For the sake of his long-term health, he had to stop pushing himself in pursuit of his dream.

Upon retiring, Morgan switched off from football. The pain of having his career taken away from him so prematurely was still too raw. “It was tough. For the first year or two I didn’t watch any football. I didn’t go to any games,” he says.

“Obviously all my mates were still playing but I couldn’t watch any of their games, partly because you’d get people coming up to you going, ‘Ah, you were such a good player,’ but I just didn’t want any of that.

“That was tough to deal with, but I had really good friends and family around me and, because I saw it coming, it wasn’t that bad. It had been three years in the making so I’d already been through all the anger and upset during that time.”

The next big thing

This wasn’t how such a promising career was supposed to end. Raised on a south Tottenham estate, football had been a constant presence in Morgan’s life. He played whenever he could, soon becoming the star of the local area.

Seeing the pure joy and enthusiasm of Ian Wright made Morgan an Arsenal fan, while Football Italia and the creative talents of Serie A shaped his appreciation for the game. Under the guidance of community stalwart Clasford Stirling, he played for Broadwater Farm alongside close friend Jobi McAnuff and was picked up by Wimbledon as a 10-year-old. They rose through the ranks together.

A fast, tricky left-winger, Morgan was often compared to John Barnes or Ryan Giggs but felt he was more suited to playing centrally. “I always saw myself different to how other people saw me. People would say my speed and my technical ability were my biggest strengths. For the most part I played on the wing, although I hated it and never saw myself as a winger,” he says.

“I guess I had all the attributes that make you good as a winger, or other people saw them in me, but they weren’t the things that I valued. I was always a central midfield player in my opinion. I was someone who would get the ball and start the play from midfield. I saw it as the perfect position for me.”

Twisting inside and out, jinking past defenders with ease, Morgan was earmarked for a bright future from a young age, first representing England at Under-16 level.

“It was a really positive experience. When you’re picked for England, it basically means you’re one of the best players in the country in your age group. It’s a pat on the back for everyone involved in your club – your coaches and obviously yourself,” says Morgan.

“It’s a new environment. It’s about going in there and showing how good you are and representing yourself in the right way. We had Glen Johnson, Lee Grant, Dean Ashton, Jermaine Pennant. Some really good players.”

Even among such strong competition, Morgan stood out. In front of a full house at Portman Road in February 2002, he opened the scoring against Germany Under-19s. Darren Bent went on to grab a brace as England completed a 3-1 win.

By now Morgan was a regular in the Wimbledon first team, having made his debut at 17. The club had just been relegated from the Premier League and were rebuilding under Terry Burton.

The senior players saw Morgan’s potential and encouraged him to keep progressing. Despite all the attention he received, there was no danger of it becoming a distraction.

“To be honest, I never really took any notice of it. It’s not like now, for example, with social media. I always got a bit embarrassed by people saying certain things to me,” he says.

“After first-team matches, if I’d played well, I didn’t want to be man of the match in case I had to go and speak. I remember getting in big trouble once because I knew I’d played well, and there was a chance I might be man of the match, so I just left the stadium and went home. The limelight wasn’t something I was really interested in. I just wanted to play football and improve.”

Morgan continued to develop at a remarkable rate, leading to offers from Premier League clubs. Tottenham were persistent suitors. “That was the most talked-about scenario. That happened three times to be honest,” he says.

“The first time, I didn’t know about it. It was only revealed to me years later that David Pleat had approached Stewart Robson, my youth-team manager, and said that they were going to spend £2million – would that be enough to get it done? That’s how it started.

“They made a bid and the club rejected it. Then they made a second bid, and the chairman had accepted it. By the time I’d said goodbye to everyone, literally on that morning, Terry Burton had cancelled the deal because one of my England team-mates, Jermaine Jenas, had gone to Newcastle for £5million.”

Burton felt that Morgan should command a similar fee, but the midfielder disagreed, citing the fact that he wasn’t playing regularly. The manager stood firm on his valuation in the face of further interest from Newcastle United and West Ham before the club’s situation changed and they had to cash in.

Wimbledon fell into administration in June 2003. That same month a £400,000 offer from Spurs was accepted, but Morgan failed the medical. The outlook was bleak. He would play just three more competitive games, the last of his career coming away to Preston North End in October.

The impact of injuries

Morgan’s contract with Wimbledon expired at the end of the season. He trained at Watford and then Crystal Palace with the aim of proving his fitness and earning a deal but, no matter what he tried, his knee wouldn’t hold out.

His injury problems had started in April 2002, when he suffered a ruptured cruciate ligament against Crewe Alexandra. Morgan had tried to ride a challenge but got caught in mid-air, causing him to land awkwardly.

Surgery was carried out in Austria but his leg became infected. It was a taxing period, with plenty of obstacles for Morgan to overcome in his recovery. Six months later, he was back in the first team. But, from there, his knee deteriorated. 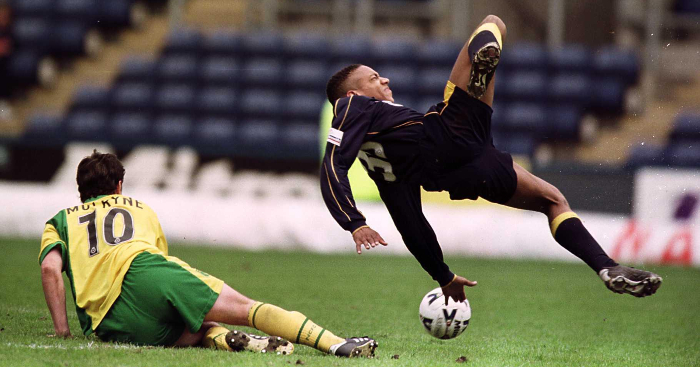 “The other injuries were cartilage injuries, which turned into defects. You had bone rubbing on bone, which means you’re in trouble.”

Eventually, Morgan was forced to admit defeat. After 33 professional appearances, his career was over when many are just beginning. The initial devastation gradually gave way to acceptance and an ability to put his issues into perspective.

“I made the decision that that was it because I wasn’t getting anywhere. I actually had a few clubs say they’d offer me a contract regardless. They knew I could play but I’d have to be managed. But I’m not going to destroy my knees to play at a level where I’m not going to do myself justice. I ended up walking away from the game.

“I’ve learned to accept it because firstly it was such a long time ago. It was a period of my life, and quite a short period as well. Lots more has happened in my life than football. I signed a professional contract at 17 and, essentially, by 20 that was done. So three or four years of my life hasn’t defined who I am.

“It’s a really difficult thing to do, to be a professional footballer. There are so many kids that dream of playing for England or playing in big stadiums in front of thousands of people. With that part of it, I can say, ‘I achieved something there that not many people have achieved,’ and be proud of that as opposed to thinking, ‘What if? What if?’ Because the reality is that it was ended.

“For me, it’s important to be able to recognise that that was just a part of my life. I can now look back on it with fondness, which I couldn’t have done 10 years ago. It was more like, ‘Bloody hell, I wish that didn’t happen.’ But that’s not a healthy place to be.”

After retiring, Morgan started working for the agency that had represented him but found that the business’s financial aims didn’t always align with the best interests of his clients. He felt caught between the two and was reluctant to make uncomfortable compromises. More fulfilling endeavours followed.

“Throughout I’ve always coached, which is something I love doing. My son now plays, so I coach his team, and I went back to Broadwater Farm and coached there for several years, which was nice. To give back and to repay someone like Clasford, who does so much for so many different people.”

The idea of working in a structured and results-oriented academy setting doesn’t appeal to Morgan, who prefers a more personal approach. He wants to use his experiences to help develop rounded people, not just great players.

“Ultimately, coaching is about making people better, and it’s not just the football side of things. It’s everything. It’s making them better people. Making them good citizens. I know I’ve got lots to give but I’m not sure I can do that under the sort of conditions you find in academies.

“Going back to Broadwater Farm, of course you’re a football coach, but you’re also a mentor and a role model. You can have an impact on these young people. Working in a school felt like a natural fit. All of the experiences I’ve had have helped me in this role and in general.

“Lots of people go through big transitions in their lives and the key is to try to find what you’re good at and use the skills that you have to move forward.”