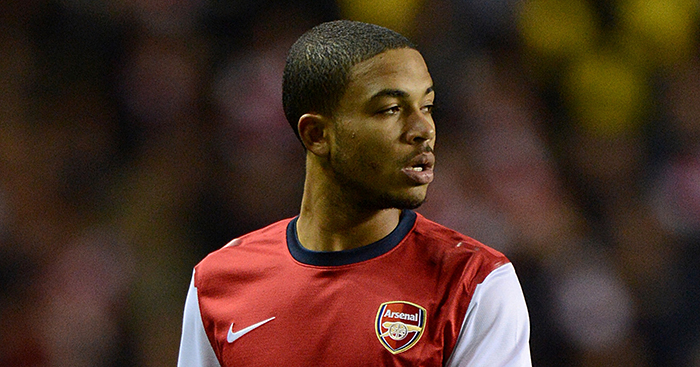 Jernade Meade has been here too many times before. Injured again, he’s missing another game on the day we speak. And it hurts.

His club, Aalesunds FK, win again and are currently on a run of seven victories in a row. Meade was only involved in one of them, playing 25 minutes as a second-half substitute. Aalesunds are steaming towards the title and promotion back to the Norwegian top flight, but Meade’s time there has been decimated by injury and it’s taking its toll.

“In the first game I started, I ruptured my ACL [anterior cruciate ligament]. That was it. That season was finished for me,” he says.

“Even now, it’s been a stop-start season for me this year. It’s been a very frustrating couple of years in Norway so far. It’s not going to plan.”

At 26, Meade has already seen a lot during his career as a professional footballer; how rewarding the game can be but how cruel too. There has been injury heartache, mistrust of agents and lost opportunities. Naivety and a lack of guidance have sometimes let him down.

He went from playing in the Champions League with Arsenal to the depths of non-League with Hadley FC in the space of three testing years. Struggling to make headway in England, a revival followed during spells in Sweden and now Norway, but this isn’t the path Meade envisaged taking.

“You always want more,” he says. “Since I’ve left Arsenal I’ve never been happy with where I’ve been.

“I’ve always been putting pressure on myself to get back to the top and thinking about the next step, whereas you should just think about where you are now and be happy with it. Enjoy where you’re playing and the rest will take care of itself.”

Before all the pressure and expectation of being a professional, football was played for fun. Meade grew up in Luton and was obsessed with the game from an early age.

“My mum says that as soon as I started walking I was kicking a ball. When I was nine I got with a local team called Bramingham. My grandad took me with my uncle. I’m older than my uncle by a few months!” he laughs.

“Me and my uncle used to play for the same team and then another team wanted me to go on tour with them to Butlins in Bognor Regis. Luckily I went because that’s when I got scouted by Arsenal and MK Dons. I was so happy when I went home and told my mum.”

The appeal of Arsenal was obvious, and Meade joined their academy in August 2004, not long after the first team had won the Premier League title without losing a single game.

Even a Chelsea fan couldn’t deny their quality and how much he stood to gain from learning in such an illustrious environment.

“If Arsenal are coming for you, and want you, of course you’re going to go for it. It was like a dream. That was always what I wanted to do so to get a foot in the door at academy level was a great feeling.

“I don’t think there’s a better place to get your football knowledge from. Arsenal are known to play the right way and that’s a big part of how I play today.”

Meade progressed through the ranks as a fleet-footed attacking left-back, making the bench for a League Cup tie against Bolton Wanderers on his 19th birthday in 2011. His debut would come the following season when he came on as a substitute during extra time of a frenetic 7-5 win over Reading in the same competition.

A month later, Meade made his first and only start for Arsenal, away to Olympiakos in the final match of the Champions League group stage.

“A couple of days before the game I got told I was going to play,” he says. “I was so happy but I was nervous at the same time.

“On the day of the game Steve Bould spoke to me and gave me some words of encouragement and told me to just play my game. When we stood there listening to the Champions League song it made my hairs stand up. That was a massive moment.

“I’m quite privileged and proud to say that I played in the Champions League. I can hold that with me forever. That was the pinnacle of my career so far. It will be tough to get back to that stage. Never say never, but I’m a realist.”

At that moment it felt like anything was possible. When Kieran Gibbs suffered an injury soon after, and Andre Santos continued to toil following his move from Fenerbahce, Meade thought a run of games, and a chance to establish himself, was just around the corner.

But football moves quickly and an injury changed everything.

“I fractured my ankle. They got [Nacho] Monreal in and Gibbs came back before me. It was just bad luck. I think if I’d got just a couple of league games then everything would have sorted itself out. I’d have got more opportunities.

“I wish at the time that I’d gone out on loan and got experience because that kept coming up when I tried to get a team lower down the leagues. It’s all about experience. Reserve team football doesn’t mean anything.”

After eight years at Arsenal, Meade was released within months of making his debut.

Meade signed for Swansea City in the summer of 2013, expecting to be involved in the first team at another club with a progressive philosophy, but instead he found himself consigned to the Under-23s. The manager, Michael Laudrup, came across as aloof and uninterested in the players who weren’t part of his immediate plans.

“He didn’t come to watch any of our games,” Meade says. “If they needed numbers for training he’d never come over and ask us. A coach would get involved instead. I just thought, ‘What the hell is this?’

“When I realised I wasn’t going to get opportunities I lost my head a bit. To be honest it wasn’t a good year for me. I didn’t play my best.”

Ben Davies had recently made his breakthrough but Meade originally thought that he could be ousted. He ruefully acknowledges how strange that now seems.

“There’s a story where he couldn’t even get games in the reserve team and now look at him. Football’s crazy.”

Meade grew disillusioned. A loan spell back home at Luton Town yielded no appearances and yet more frustration. After weeks of trying to force himself into contention and getting nowhere, he stopped giving his all. It was the wrong attitude to have and he admits his mistake, but another was to follow.

Let go by Swansea at the end of a year’s contract, he was reluctant to drop down the divisions. “My agent was coming to me with League Two and high Conference teams, but I wasn’t interested,” he says.

“I thought maybe he wasn’t working hard enough. I thought, ‘I’ve just come from Swansea and Arsenal.’ That was my mentality at the time. Maybe I thought I was too good.

“I should have dropped down to League Two if I had to and then worked my way back up. Looking back that’s a normal route that people take when they leave these big clubs.

“That’s where maybe not having the right guidance when I was that young was an issue, and not trusting agents because most of the time you don’t think they have your best interests at heart. You think they’re just trying to do what’s easy for them. That’s my regret.”

While assessing his options and trying to stay fit, Meade developed an ankle problem which required surgery. Before he knew it he’d missed a whole season of football and, regardless of his pedigree, finding a way back in proved incredibly difficult.

Meade resorted to playing for Hadley FC as a favour to Micky Hazard, who was managing the club. From there he moved on to St. Albans City of the National League South, but it wasn’t what he wanted.

Then came the possibility to start again.

“When you’re out of football you get lots of agents trying to contact you,” he says. “An agent contacted me and mentioned Sweden. At first I wasn’t sure, but after I while I got back to him. I thought, ‘I need to get back playing and maybe I need a change of scenery.’ That’s why I went.”

A deal was signed with AFC Eskilstuna. A small club that had recently relocated, they won promotion to the top tier of Swedish football during Meade’s first season.

“We played good football and I enjoyed it. With that year out and all the setbacks, I was falling out of love with football a little bit. I started enjoying it again.

“England’s not the be-all and end-all. You can make a good living elsewhere. From these Scandinavian countries you can go to MLS, Turkey or Asia. I’ve seen people move to Germany. That was my thought process and it still is.”

After two years in Sweden, Meade signed for Aalesunds in March 2018, hoping to help them straight back to the Eliteserien after suffering relegation. But that ruptured anterior cruciate ligament ended his season before it had truly begun and Aalesunds finished third, narrowly missing out on promotion, in his absence.

“It was tough, but the club were really good to be honest. I was at home a lot of the time because I couldn’t do anything really. I was getting treatment in England and I came back when I was able to do a bit more.

“It’s tough when you’re going into training and you can only do rehab stuff. You can’t go out on the pitch. You come home and you’re by yourself.

“That kind of stuff is mentally tough, but it’s true when they say that you’ll come back stronger. If you can get through that then you’re ready for anything.”

Meade’s current battle is with an ongoing hamstring problem that’s made for a much-interrupted second season. Often unable to train at full intensity it’s been hard to find his rhythm and play regularly. It’s an exasperating cycle to be stuck in and there’s still some residual pain and soreness in his knee.

The situation has created some uncertainty around Meade’s future, but he’s looking to find a solution.

“I haven’t got a contract for next year so that’s another thing that I’m thinking about now,” he says. “I spoke with my agent to see what we can do because I need to find something just for a bit of security so I’m not stressing.”

The Norwegian season finishes in November so there’s still time for Meade to have an impact on the title race, adding to his nine appearances so far.

For someone who has suffered more than his fair share of disappointment during an eventful career it would represent a fitting recovery.