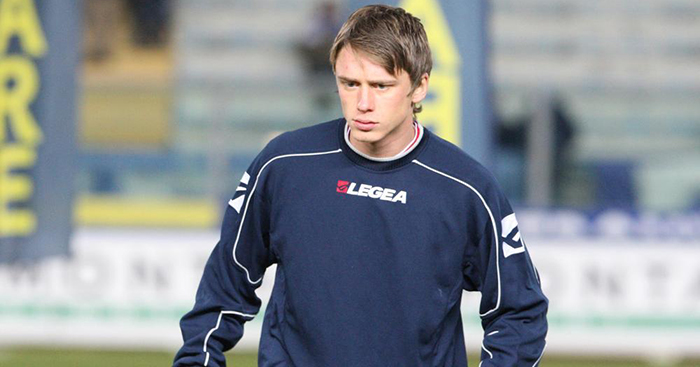 When Kris Thackray was let go by Newcastle United as a 16-year-old, he might have feared his football career was over before it had began.

Thackray had spent seven years at Newcastle before his release in 2004, and subsequent trials at Scunthorpe, Darlington, Scarborough, Derby and Rochdale all led to nothing.

However, after deciding to take Gateshead College’s sports diploma course and then being selected for the England Colleges team, a tour of Italy in 2006 led to a surprise and unusual back-door route into the professional game with then-Serie A outfit Reggina.

“I was extremely shocked when the scouts approached my manager,” Thackray says. “The fact that a Serie A team might have been interested was very unexpected but what I had always dreamed of.”

Twelve years on, Thackray is now 30 and can look back on a career which has so far taken him to Italy, Malta and Germany – and allowed him to play against world-class players such as Mario Balotelli, Julian Draxler and Heung-Min Son.

Not that it has been all plain sailing for the defender since he departed for Italy. In fact, despite spending three years on the books at Reggina, he never played a single game for them.

“The most difficult phase was the first year or so,” he says. “It was a race against time for me to learn the language so I could understand the coach and my team-mates and so that I could express my personality and build a social life off the field, which would enable me to blend well into the culture and way of life.

“After that, I thoroughly enjoyed living in different regions of Italy, learning about the food, the dialect, the traditions and obviously the climate.”

Thackray spent time out on loan at fourth-tier club Monopoli and at Serie B side Ancona before later joining third-tier Fidelis Andria and then Consenza, where he played alongside former Italy international Stefano Fiore, who he recalls as playing with “a style and a grace on the ball that was a pleasure to watch”.

By the time his deal at Fidelis was up, so too was Thackray’s time in Italy

“Italy was probably the toughest yet rewarding league [I have played in] because the passion from the fans and the players was unique,” he says. “Tactical and technical skills were very high and you always needed to be on top of your game.

“Also, receiving your wage depended on the results at the weekend – which added an extra pressure.”

After a spell out of the game trialling for English clubs, in 2012 Thackray joined Maltese club Qormi, with whom he twice finished as runner-up in the Maltese FA Trophy.

But football on the island turned out to be very different from what he was used to in Italy.

“Maltese football is a strange one,” he says. “Being the first step into Europe for players from around the world you get a very high level of foreign players, but that is balanced out a little by the Maltese players.

“You have to be very good in one on one situations, as tactical proficiency is pretty low.”

After a year in Malta, Thackray earned a move back to mainland Europe with German fourth-tier side Alemannia Aachen, where things started well before an ankle injury which required two operations limited his gametime and in 2015 saw him drop down a division to play for KFC Uerdingen.

Like Aachen in their 32,000-capacity New Tivoli stadium, Uerdingen significantly dwarfed the clubs around them. A grand old club, they play at the giant Grotenburg-Stadion and won the German Cup in 1985 before falling down the divisions.

“Germany was very professional and regimented,” Thackray says of his four years in the country. “The work rate and the attitude of the Germans was similar to the British. However, the difference being they played with a lot more intelligence.

“It was a real privilege to play for Alemannia Aachen getting almost 15,000 fans a week, you could feel the vibrations of the fans through the grass as you played.”

His time in Italy and Germany of course developed him as a footballer, but he also acquired other skills which the defender sees as a huge bonus of his time abroad.

“I’m fluent in Italian and pretty good in German now,” he says. “Hopefully these skills will be useful in football and in my life in the future.

“Not being particularly good at school with languages, it’s extra special now when I’m on holiday or able to understand a foreign language. It almost feels like a super power!”

Thackray is now back playing in Malta for Gżira United and has recently helped them secure a spot in the Europa League qualifiers for next season, but whether he stays around to play in them or not is another matter.

“In the future, I want to be closer to family and transition into coaching,” he says. “I may need to think about a move back to the UK.

“I’ve enjoyed the excitement and the experiences, but being around my family and a little bit of stability feels very appealing at this moment.”

This interview may have been a reflective experience for Thackray, but he still has plenty more to give in his footballing career. Who knows where his next move will take him.