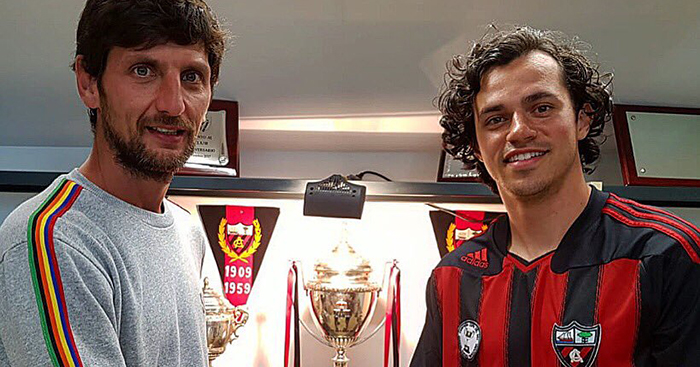 Oscar Borg played with Marcus Rashford, Declan Rice and Scott McTominay, but while those three thrive, Borg is trying to get his career back on track in Spain.

The Surrey-born defender, whose previous clubs include West Ham United and Aston Villa, was set to sign for Manchester United in the summer of 2014 having spent pre-season with the Reds.

But the move broke down and, six years later, he is plying his trade at Arenas Club de Getxo, in Spain’s third tier, after joining the Basque Country side over the summer.

“I was at West Ham when United contacted them asking if they could have a look at me,” Borg says. “To get an approach from the biggest club in the world was surreal.

“It was the first day of pre-season, so all the first-team squad was there and Juan Mata came up to me and wished me all the best.

“As a 16-year-old, for someone like that to say those words was something I could only have dreamed about.”

He lined up alongside Rashford, McTominay and Axel Tuanzebe when United took part in the annual Milk Cup competition in Northern Ireland, and his performances prompted the Red Devils to offer him a permanent contract.

“After the tournament, my parents and me sat down with the club and United told me they wouldn’t let me walk out of the door without signing. I was ecstatic.”

The transfer did not materialise, however, and it is something he can still not fathom.

“There was no indication about what went wrong and nobody has ever explained it to me,” Borg, now 22, says.

“These things happen in football and I went back to West Ham, where I had to focus because there was no point getting caught up in it.”

Moving on to Villa

Borg, whose uncle, Colin Pates, played for Chelsea and Arsenal, spent time at AFC Wimbledon before West Ham snapped him up.

Despite progressing through the Hammers’ academy, where his coaches included West Ham legend Steve Potts, he came to the conclusion there was no clear pathway to the first team.

And so Borg, who counted Rice and Grady Diangana among his team-mates in east London, moved on to Aston Villa, where he had been on trial at when he was 14.

“They wanted to sign me, but I was 14 and I didn’t think I should move away from home at such a young age. Villa told me they had watched my progress for the next four years, so I was happy to sign.

“It was just towards the end of the 2015-2016 season when they were about to be relegated from the Premier League, so I thought I may be given a chance in the first team.”

That opportunity never arose, though, and Borg spent most of the following campaign injured.

Delighted to be back playing! Looking forward to the season ahead! #AVFC #UTV pic.twitter.com/wWV92uzcre

“It was supposed to my breakout season, but I wasn’t going to mope about as I was at a big club with world-class facilities,” he says.

“I kept a positive attitude because if I had dwelled on things, it would have affected me mentally and on my game.”

From non-league to Spain

He was eventually released in the summer of 2018 and was close to signing for Bournemouth before the Cherries captured Spanish left-back Diego Rico on transfer deadline day.

Without a club, he kept himself fit and signed for National League South side Braintree United in December, going on to make 16 appearances.

Massive thank you to everyone who voted me as MOTM! Congrats to @CMorton_10 on getting in team of the week! Lads were unreal but deserved more, a point in the right direction! Looking forward to Boxing Day @braintreetownfc pic.twitter.com/ZaSHCx5uWb

The move to north-east Spain came about through his agent – and it was a transfer he was enthusiastic about.

“I jumped at the opportunity,” Borg says.

“Going abroad was something I was always interested in and I was told my style of play as an attacking left-back would be suited in Spain.

“I am learning Spanish, but not Basque, as even the locals have trouble with it because it is so difficult.

“The great thing about football is that it is a universal language on the pitch.

“I am picking up phrases and it makes me appreciate the foreign players who come to England when they try to fit in and do well.”

Arenas, managed by former Real Mallorca defender Javier Olaizola, are in the regionalised Segunda Division B but currently find themselves bottom of the table following a 2-1 defeat to Athletic Bilbao B at the weekend.

Was good to be back playing again after a bit of time out! Always nice to get the win and be on the scoresheet as well! @arenas_club1909 pic.twitter.com/NdtXVNDmbW

Borg, who played the full 90 minutes in that game, says: “It is great to be playing regularly. Training is good, but it really can’t replicate a match day.

“I have been able to have some in-depth conversations with the manager about being a full-back because he also played in the same position.

“I am also living with two team-mates, Unai Hernandez and Toni Frau, which is good because it means I have company in the evening and I can also ask them any questions I have about what happened in games or during training.”

Of paternal Maltese heritage, Borg is waiting to hear back from the Maltese FA after he enquired as to whether he is eligible to play for the Mediterranean island.

Despite suffering several setbacks so far, Borg, who also qualifies to play for Turkey thanks to his Istanbul-born grandmother, is positive about his career.

“I am not envious of those boys I played with who have gone on to appear in the Premier League and at international level because we were all given the same opportunities, and we all worked hard,” Borg says.

“It actually gives me more confidence, knowing I trained day in, day out, with them so in my head I know I am capable of playing at that level.

“It is up to me to reach it. My dad always says ‘good things never comes easy’, so I am going to keep working hard.”

If he sticks to that adage, it would be no surprise to see him back in British football before too long.