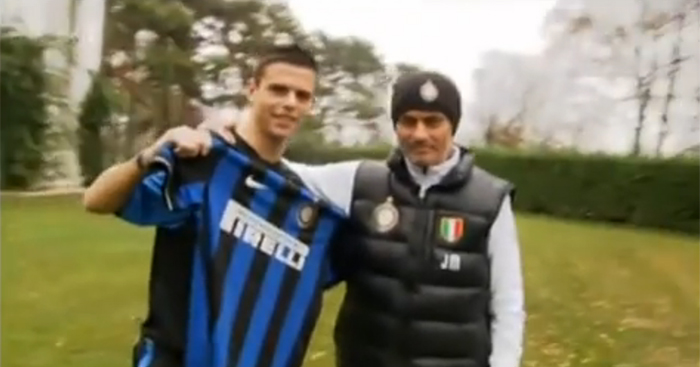 In 2010, Sky One aired a reality show called Football’s Next Star. The prize was a six-month contract with Internazionale, then managed by Jose Mourinho and on the cusp of a historic treble.

Thousands of young hopefuls applied to appear on the show, but only 10 made the cut to head to Italy and be judged on not only their ability on the pitch but also their ability to adapt to a new country and language.

Those 10 were whittled down further over the course of the series, hosted by Jamie Redknapp, until 17-year-old winger Ben Greenhalgh was crowned the winner and suddenly thrust from Welling United, for whom he had made only one first-team appearance, to Italy and one of the biggest clubs in the world.

It all started when he, along with the rest of the Welling squad, attended a trial day and caught the eye of Redknapp.

“We just treated it like a training session at first, doing different circuits and things with the ball,” Greenhalgh, now 27, says. “I was one of the lucky ones to be chosen to play in the final game that day, and that was where Jamie spotted me.

“I was the one player who got through, and there would have been about 250 players there on that day alone. The lucky bit was getting into that game, once you were there you had your chance to impress.

“I made it into the final 40, and we all went to Watford’s training ground for two days. After one day, they got rid of 20 and then they found the 10 that went to Italy.”

Greenhalgh and the rest of the finalists were moved into a huge villa overlooking Lake Como, living the life of an elite professional while learning Italian from their housekeeper in between training sessions at Inter’s state of the art academy.

He progressed through to the final with ease and says he had heard murmurs that he was among the favourites to win early on, as was Irish midfielder Craig Walsh, who fell at the last hurdle alongside striker Connor Smith.

“We were a bunch of 16 and 17-year-olds living the dream in this mansion, but they wanted to know if we could adapt to living in a new country,” Greenhalgh says. “That was more important for them to think about because we’d be moving out our comfort zones. I bought into that, and maybe that helped me.

“I think Craig and I always knew it would be between us, even though nobody wanted to say it. There were stories that our names were being talked about within the club.”

After Greenhalgh, who’d previously worked as Cristiano Ronaldo’s body double in adverts, had been crowned the winner, he returned to England and trained with Watford while he waited for Sky to air the show.

The Hornets were interested in signing him, too, but the youngster shunned the interest to move permanently to Italy – where life was suddenly very different to the one he had experienced during the show.

“There was interest from Watford, and Jamie told me there was a two-year deal on the table at Tottenham, where his dad was working at the time, if I didn’t win the show,” Greenhalgh says.

“It was different when I actually moved, there was no mansion, and the under-20s were living above the changing rooms.

“I went out on my own and was working with different coaches, too. That didn’t help my cause.

“The show hadn’t broadcast in Italy, so nobody knew who I was. They wanted to do another series of it with Manchester City and I was all for that because I think players would have got a better chance in England.

“I don’t think it impacted my time there, that was down to my personal decisions. I left because of match-fixing and money problems.”

Greenhalgh was actually awarded another 12-month contract by Inter after his initial deal had expired and was sent out on loan to third-tier Como to gain experience, but it was his time there that helped convince him to return to England.

“I’d gone on loan to Como and I’d done quite well (scoring eight goals in 12 games), I was enjoying it,” he says. “I learnt most of my Italian there because I was thrown in the deep end with a load of Italians who couldn’t speak English; at Inter, there were other foreigners who knew English better than Italian.

“It got to Christmas and my contract was running out, Como players hadn’t been paid for months. I was on loan so was okay in that regard, but I didn’t want to be in the same position afterwards.”

A dream not realised

The ultimate goal for Greenhalgh, of course, was to play for the Inter first team, and though it never materialised, he looks back philosophically given the club won the treble shortly after his arrival.

He also believes a change of manager came at the wrong time for him, with Mourinho walking out after winning everything to be replaced by Rafa Benitez.

“Rafa came in as I went out on loan, so I didn’t see much of him. It was probably bad timing because he gave more academy players a chance,” Greenhalgh says.

“But you had to realise this was Inter and they were going for the treble when I arrived, they weren’t about to put some academy kids in when there are so many big games and world-class players.

“But I did train with the first team for two weeks, and twice on the show too. On the second or third episode, it shows Gavin (Colton) getting involved, but they didn’t show me joining in after because it might have given things away.

“That gave me a big confidence boost, but it probably annoyed the other lads. I remember picking the ball up on the left wing, running at the right back and then my legs went to jelly because I saw Lucio, one of the quickest defenders around. I ended up dribbling off the pitch!

“When we trained again in the final, I felt comfortable playing with players like (Ricardo) Quaresma and (Patrick) Vieira. It was a massive experience for me.

“Other than that, Mourinho would come in and say hello sometimes, but at the time he was on top of the world, he had other things to think about.

“Everyone says they weren’t the best team to win the Champions League, but if you look at the players Mourinho had who weren’t even on the bench, like Quaresma and Marko Arnautovic, you had to be realistic.”

Mourinho referred to Arnautovic as “a fantastic person with the attitude of a child” during their time together at Inter, and Greenhalgh can certainly understand that point of view having spent time with the Austrian himself.

“Arnautovic would play with us in the reserves quite often – he’s absolutely crazy,” Greenhalgh says. “He was hard to manage.

“I was walking with him to the restaurant we ate at once, and he just smashed wing-mirrors off 10 cars. I was looking round, trying to figure out what was going on and he was just laughing about it!

“He was a good guy and I’ve always said he was a world-class player when he wanted to be, but to get him focused was tough.”

Inter suffered a dramatic downturn in fortunes after Mourinho’s departure, and Benitez was sacked by Christmas, just six months into his reign.

Greenhalgh admits the timing of his arrival was awkward but says the Spaniard’s own decisions played a huge part in his failure at San Siro.

“Rafa is a great manager, but what he did at Inter was mad. He probably landed a bit like Moyes at Man United with Ferguson, with an older team that had won it all and weren’t willing to win it again in a different way.

“But it was just so negative and went so wrong, the players he chose and things like that.

“He took Diego Milito, who for me should have won the Ballon d’Or that year after scoring twice in the Champions League final, being top scorer in the league and scoring in the Coppa Italia final, and never played him.

“With Mourinho, I’d never seen players with so much awe for a manager, and the senior players went from that to having zero respect and not wanting to play for a manager.

“Mourinho was very relaxed, Benitez just a bit too much and straight away the players just didn’t buy into him.”

Now at Dartford in the National League South after spells at seven other clubs including Inverness Caledonian Thistle and Maidstone United, Greenhalgh acknowledges his career may have turned out differently had he made certain decisions. But he certainly doesn’t regret his time in Italy.

“When I came back from Inter, the offers weren’t what I hoped for because people hadn’t watched me for two years,” he says.

“But I learnt a lot from my experience in Italy; the way they played, the way they coached and managed, as well as the language. It is something I can say I’ve done, being part of a Champions League-winning team.

“I do think I could have prolonged my career at the top had I gone to Spurs or something like that, but I don’t regret anything. You can’t look back.”