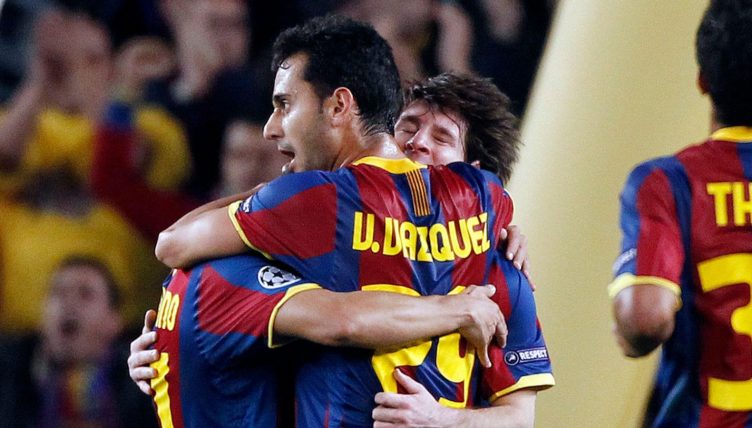 It’s hard to imagine Lionel Messi ever found anything on a football pitch difficult.

Such are his preternatural talents, it’s tempting to think Messi came out of the womb nutmegging the midwives before chipping the doctor.

He has now perfected free-kicks to such an extent it feels like a team might as well have conceded a penalty whenever they give Messi the opportunity to take a set-piece within range of their goal.

Yet despite having scored 58 free-kicks in his career, Messi’s dead-ball prowess did not necessarily come as naturally to him as other aspects of the game.

It took four years after his senior debut before he converted a free-kick for Barcelona, against Atletico Madrid in October 2008, and it wasn’t until February 2009 that he found his groove courtesy of some advice from Argentina boss Diego Maradona while on international duty.

Messi had grown so frustrated at failing to find the back of the net during free-kick practice that he walked off the training pitch, and that’s when Maradona stepped in.

“I saw Diego coming, he took him by the shoulder and said, ‘Little Leo, little Leo, come here, man. Let’s try it again.’ It was like a teacher with his pupil,” Maradona’s assistant manager Fernando Signorini told La Nacion, via Goal.

“He continued, ‘Put the ball here and listen to me: don’t take your foot away from the ball so fast because otherwise it won’t know what you want.’ He then stroked the ball with his left foot straight into the angle of the net, with Messi’s face full of admiration.”

Maradona in 2010 as Argentina Coach Hitting a Few Free-Kicks in Training 🎯 pic.twitter.com/OzSvdZii7f

It was perhaps the one talent Messi was – by his own outrageous standards – slow to develop. As a youth player at Barcelona’s famed La Masia, he actually found himself down the pecking order, behind two players you are unlikely to know too much about.

Roger Giribet, who played alongside Messi in Barca’s youth system, told Goal in 2018: “Victor Vazquez, who was amazing, and the left-footed Juanjo Clausi used to take them, Messi almost never.”

Vazquez’s name may ring some bells – the attacking midfielder played three games for Barcelona’s senior side, scoring once in the Champions League, although the majority of his time at Camp Nou was spent playing for the reserves in Segunda B after a serious knee injury scuppered his first-team prospects.

When he was ruled out for a year, Vazquez burst into tears. “It was really hard because I knew I was really close to playing with the first team,” he told Sports Net. With the likes of Thiago Alcantara beginning to emerge, Pep Guardiola told him: “You lost your chance.”

After leaving Barca in 2011, Vazquez finally established himself as a top-flight player with Club Brugge in Belgium. And it was with Brugge where the Spaniard truly came to the fore.

He was named Footballer of the Year at the end of 2014-15 and notably scored two free-kicks in one game to secure a 2-2 draw with Anderlecht, rescuing a point with an 89th-minute homage to Ronaldinho vs David Seaman.

Following a short spell in Mexico with Cruz Azul, Vazquez once more became a fan favourite with Toronto FC, helping the side win an unprecedented domestic Treble in 2017, breaking a number of records along the way, after which, Guardiola texted him: “Congratulations, you showed what you are.”

Due to the presence of Sebastian Giovinco, Vazquez had to take a back seat while the Italy international took preference at set-pieces. He did produce one particular moment of magic against Columbus Crew in 2017, however, cheekily stroking the ball under the wall and past the goalkeeper.

We wouldn’t wish to speculate on whether Messi was keeping tabs on his former team-mate’s career, but a year later he himself repeated the trick against Girona.

“I always try,” Vazquez, who now plays for LA Galaxy after a spell in Qatar, told MLS’s official website of that particular effort. “I know the walls are jumping if you are really close to goal.

“They think if you have the quality to put it over the wall, they can block the ball. I did it twice in Belgium, scored one. And I thought this day also it can happen.

“It’s an amazing goal, everybody says ‘genius’, but in my mind, it’s because all the walls are jumping. Now, if I have a free-kick, they for sure will not jump. I will try another thing because I’m always thinking.”

Vazquez may not have hit the astronomical heights of Messi – bar Cristiano Ronaldo, and let’s not get into that argument, who has? – but he has still forged a pretty solid career.

The same cannot be said, however, of the other La Masia starlet to sit above Messi in the free-kick pecking order.

Juanjo Clausi was another member of the youth side that also featured Gerard Pique and Cesc Fabregas, but he never graduated into the first team.

Instead, he embarked on a nomadic career in the lower reaches of Spain, playing for 11 different clubs, some of which he has spent more than one spell with.

In a 2015 interview, he revealed he had begun studying electromechanical maintenance and attributed his slide down the divisions on his lack of a reliable agent.

“When he [Messi] came we were amazed to see that such a small boy had that quality,” Clausi told Infobae in 2016. “In fact, I remember that when he arrived, he was taken down to Infant B because of his height, but soon after he was taken with us, it was phenomenal.”

You can find footage online of Clausi playing in sparsely attended third-tier games and it is like watching a lower-league Messi, with the winger beating players and driving towards goal with the ball glued to his left foot.

His La Masia legacy remains evident, too, converting a free-kick from the edge of the area with a lazy swing of his boot.

Yet while Clausi’s life and career have gone in a very different direction to many of those players he lined up alongside at La Masia, he does not look back and rue his fortunes.

In a separate interview with YoSoyNoticia, he recalled winning a youth tournament in Italy while being coached by Tito Vilanova: “I was the top scorer and Messi was chosen as the best player.

“I keep that picture of the two of us posing with the trophy, and now see where Leo is and know that I could share that moment with him… not everyone can say that.”

READ NEXT: The mystery of Mario Rosas, the man Xavi called ‘a mix of Laudrup and Messi’