The triumph and tragedy of Ronaldinho’s brother’s playing career 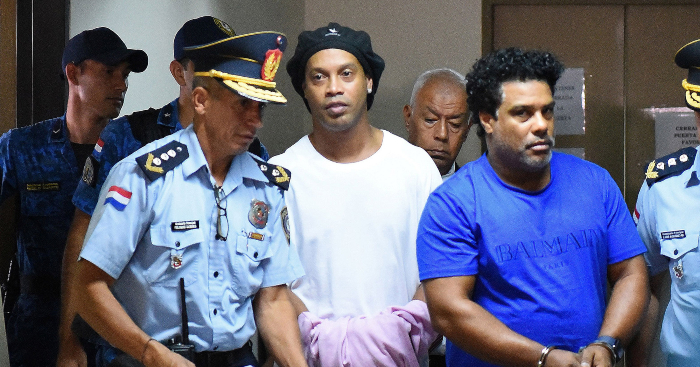 When Ronaldinho collected his second consecutive FIFA World Player of the Year award in 2005, he had one person in particular on his mind.

“He’s my idol,” Ronaldinho said of his brother Roberto, more commonly known as Assis. “He’s been through a lot and has helped me every step of the way. He has encouraged me never to stop trying.”

Fifteen years later, Ronaldinho and Assis were once again in the news, not regarding Ronaldinho’s ascent but rather his fall from grace. As the former Barcelona superstar celebrated his 40th birthday, the brothers were behind bars in a Paraguayan prison after being arrested for the use of fake Paraguayan passports.

Reports of Ronaldinho playing in a prison futsal tournament, scoring five goals and assisting a further six in an 11-2 victory in the final, were in-keeping with the joyfully haphazard image we like to imagine of the Brazilian. Think Vinnie Jones in Mean Machine, except he’s wearing a pair of gold Nike Tiempos while nutmegging a burglar.

But their arrests were just another chapter in what is quickly becoming a forlorn postscript to Ronaldinho’s career, featuring various legal battles, talk of bankruptcy, and a number of desperate money-making schemes.

Ronaldinho and his brother Roberto Assis were given their court hearing by a judge via a video call (🎥 @edgar_cantero) pic.twitter.com/y5hGCRL7q1

As noted by Jack Lang in a piece for The Athletic: “Assis takes care of Ronaldinho’s business affairs and makes sure he’s where he has to be at any given time. Ronaldinho trusts him implicitly, to the extent that he seems content to outsource a whole chunk of his existence to him.

“I once followed Ronaldinho on a press junket in Mexico City and observed their interactions; it is not much of an exaggeration to describe Assis as a puppet-master. Had he not been there, it is doubtful Ronaldinho would have found his way to breakfast, let alone the photoshoots and meet-and-greets that had been arranged for him.”

Yet for so long Assis was viewed as a positive influence on Ronaldinho’s life. Assis himself was once a professional footballer and sometimes likes to think, had things turned out differently, he could have been the one collecting a FIFA World Player of the Year award.

Mistakes and misfortune prevented that from ever getting close to happening but at least provided Ronaldinho with lessons he could learn from in his own career.

Assis’ talents were initially to thank for dragging the family away from the poverty of living in a wooden house in a favela in Porto Alegre. Joining Gremio’s academy at the age of 11, his precocious dribbling skills saw his playing style compared to that of Diego Maradona.

By the age of 16, he had already attracted the attention of Torino who, in an attempt to steal in before he signed a professional deal with Gremio, staged what became known in Porto Alegre as “the Assis kidnap”.

Enraged by Torino whisking the teenager away on a flight to Turin for a two-week trial, Gremio prepared a lavish contract to convince him to stay, including a plush house complete with its own swimming pool. Assis stayed and moved his family into the home.

He quickly made an impact at Gremio, winning three consecutive state titles between 1988 and 1990, and finished the 1988 South American Under-20 Championships as top scorer, an accolade later achieved by the likes of Adriano, Edinson Cavani and Neymar.

In 1989, he scored the opening goal in a 2-1 victory over Sport Recife in the Brazilian Cup final, celebrating wildly after finding the bottom corner.

But 1989 was overshadowed by personal tragedy. Just days before Assis turned 18, and two months before Ronaldinho turned nine, their father Joao was found unconscious in the family home’s swimming pool after suffering a heart attack, later dying in a coma.

As the elder brother, Assis adopted the role as the father of the family, which only increased the pressure on him to succeed as a footballer.

Tipped to be a part of the Brazil Under-23 side trying to qualify for the 1992 Olympic Games, Assis suffered a serious injury which kept him sidelined for eight months in 1991. Upon his return he struggled to regain his form but managed to secure a money-spinning move to Europe, joining Swiss outfit FC Sion.

The Swiss league lacked the prestige required to further his international prospects but provided financial security for his family. As noted in the book ‘Ronaldinho: Football’s Flamboyant Maestro’: “It can be viewed as the first of a number of sacrifices in which the welfare of the family took precedence over his own career development.”

More success followed at Sion, with Assis part of the side to win the Swiss Cup in 1995. That earned him a move to the more illustrious surroundings of Sporting Lisbon, but he failed to establish himself in the side and, after just five appearances, found himself back in Brazil on loan at Vasco da Gama.

He returned on loan to Sion in 1996 and played a handful of games as they claimed a league and cup Double, followed by a brief renaissance at Sporting in which he scored a brilliant free-kick in a 2-1 victory over fierce rivals Porto.

That revival lasted all of eight appearances as Assis soon found himself travelling around the world from club-to-club: Estrela da Amadora in Portugal, Japan’s Consadole Sapporo, Guadalajara of Mexico, back to Brazil for one sub appearance with Corinthians and, finally, Montpellier.

Assis was just 29 when he joined Montpellier in 2001 but was already being described as a “former great hope of Brazilian football” in an article at the time.

By that point he was already advising Ronaldinho in contract negotiations and was instrumental in the controversial deal that took the young prodigy to PSG, leaving Gremio without a penny. He had already rebuffed an offer from PSV on behalf of Ronaldinho while playing in Japan, eager for his younger brother to remain patient and make the right move unlike he did by joining Sion.

Assis retired after a season with the French outfit, allowing him to focus solely on being Ronaldinho’s agent and mentor, a role which, for better or worse, has led them both to where they are now: on house arrest in a Paraguayan hotel after being granted a release from prison.

“He left his whole life in the hands of his brother. You can’t understand that decision, it was a stupid one that was hard to accept,” former Brazil forward Walter Casagrande bemoaned of Ronaldinho in an interview with Globo Esporte. The criticism feels especially poignant, given Assis could have played alongside Casagrande at Torino had he made a different decision of his own.

If Casagrande does want an explanation, maybe he should look no further than a tweet posted by Ronaldinho on January 10, 2020. In it, Ronaldinho makes his feelings clear for his brother, telling him he loves him while wishing him a happy birthday. Most strikingly is the description he uses to sum up Assis: “Brother, father, partner.”

In an ideal world, perhaps “footballer” was all he’d have needed to be.

READ NEXT: The last goodbye: When a 33-year-old Ronaldinho conquered South America