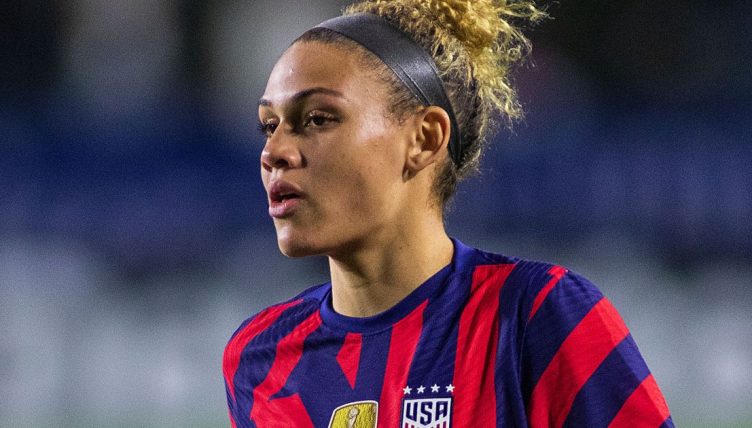 Trinity Rodman has been playing professional football for less than a year, but she is already carving out an impressive legacy.

It is incredibly rare for young players in the National Women’s Soccer League – the top tier of US women’s soccer – to make such an impact. But somehow, aged just 19, Rodman has managed it.

In fact, in the space of a year, she’s gone from the youngest player ever to be drafted into the NWSL to signing a new contract worth more than $1.1million, making her the highest-paid player in NWSL history. And in February, she made her debut for the US women’s national team.

But how did this happen? Where did Rodman come from? And how has she broken onto the scene so quickly?

Prior to anyone knowing her name – or her first name, at least – Rodman was playing in the Elite Clubs National League, one of the top youth leagues in America.

There she won four ECNL National Championships, five ECNL conference titles, and five Surf Cups, one of the premier tournaments on the West Coast. At the time, she had played both with her own age group and the group above.

Her talents were clear, to the point where she was ranked the best forward recruit for college football. With interest from several schools, Rodman eventually committed to Washington State University, where she was set to become the college’s highest-ranked recruit ever.

Unfortunately, as soon as she committed to WSU, the pandemic hit and world sport hit the pause button, which included the National College Athletic Association women’s football season coming to a stop before it had started.

When the players were told that the season would be pushed back into the spring, they were faced with a decision: either keep their collegiate eligibility or enter the professional ranks.

Most went with the former, but Rodman, ever the trailblazer, decided to skip university and go straight to the professional league.

She told the ECNL website: “I wasn’t being pushed to the max as much as I wanted to be. I was definitely being pushed, there were some really good players on the WSU team.

“But after practice, there were times where I was frustrated with myself because I was feeling stuck, knowing we were just training and then we were going to go home and have a few more months break before games started.

“And obviously, when thinking about those two, the right thing was to go pro just so I could get better as a player faster.”

Despite her success before college and with the United States Under-17 and Under-20 teams, there were still doubts about much of her notoriety was based on talent alone, especially after she decided to forgo university.

Before Trinity was even born, the Rodman name already had quite the legacy in American sports.

Anyone who was a fan of the NBA during the 1990s or sat down and watched The Last Dance over lockdown recognizes it.

Dennis Rodman is a five-time NBA Champion and a two-time NBA All-Star. The NBA Hall of Famer, known for his time with both the Detroit Pistons and the Chicago Bulls, is considered the best rebounder in NBA history and one of the most successful defensive players of all time.

The Worm 🙌🏾 RT @Ballislife: There will never be another Dennis Rodman

He also happens to be Trinity’s father.

Having a famous father can undoubtedly be difficult when one is trying to prove themselves as a serious athlete.

“Obviously, he was an amazing athlete and I got those genes from him, but I’m excited to be known as Trinity Rodman and not just Dennis Rodman’s daughter,” Rodman told the Guardian after being selected second by the Washington Spirit in the 2021 NWSL draft.

“I’m excited to pave my own path and get better throughout this journey.

“You could say [my father’s fame] put a fire under me more than pulling me down.

“I was more in the mindset of, rather than saying, ‘Oh, this is annoying, I don’t even have a name,’ I was more like, ‘Oh, I’ll show these people I am an individual and I’m going to develop in soccer like he did in basketball,’ so I think I’m more driven because of it.”

You might think that drive, like her sporting genes, is inherited from her father. But that’s not the case.

Trinity Rodman, who has been open about her tumultuous relationship with Dennis, instead cites her mother as one of the primary reasons she’s made it.

“Having a dad like I do, no one asks about my mom because she’s obviously not an NBA star, but I just want people to know that my mom’s been my support system in everything in life and she’s my best friend and my rock,” Rodman continued.

“I don’t think people know how close we are and, even though she wasn’t in the NBA, she has an extremely competitive and driven mindset, and she’s an extremely strong woman. She’s my role model.”

Rodman’s transition to a professional league wasn’t easy at first. In fact, in one of her very first NWSL matches, Rodman was tackled hard by former Racing Louisville defender Brooke Hendrix.

“Being so young and being so new to all of this physicality, I was going against her, trying to run behind and she gave me a big bump,” said Rodman to Just Women’s Sports.

“That’s when I realized there’s a lot of strong players in this league and I obviously need to learn to become a bigger body and be able to manoeuvre out of it.”

But the teenager quickly adapted, and all those doubters, who simply referred to Trinity as Dennis Rodman’s daughter, have been forced to watch her drive and competitiveness on full display for the past year.

Rodman had a fantastic individual year, with 11 goals and seven assists in all competitions, making her the Spirit player with the most goal contributions during the 2021 season.

Her performances made her imperative to Spirit’s campaign, as she led the team to their first NWSL Championship while simultaneously winning Rookie of the Year.

It’s especially impressive that the team managed to accomplish such a feat given that so much of their season was defined by off-field controversies.

Their head coach was fired following an investigation into allegations of harassment and abusive behaviour towards players. Their owners were fighting over controlling percentages. And the team were forced into forfeiting two matches due to the league’s Covid rules.

Runnin' away with it 🌬️@trinity_rodman's rookie campaign was something special ✨ pic.twitter.com/4Tm6hw4uRF

Still, the players somehow managed to direct their focus to the playoff run, where Rodman became the youngest player to ever score in an NWSL knockout game, and the only player to receive the Rookie of the Year award as an NWSL Champion.

The final against the Chicago Red Stars was one for the books for Rodman. After Spirit went down early, Rodman essentially carried her team during the second half, her efforts rewarded with an assist to the game-winning goal in the 97th minute.

With such a fantastic season under her belt, it came as a bit of a shock when Rodman was initially not called up to the US national team squad for the 2022 SheBelieves Cup.

When questioned about his reasons for omitting Rodman, USWNT head coach Vlatko Andonovski said that “the national team is a completely different animal.”

However, owing to an injury to another player, Rodman was eventually brought into the fold, making two appearances during the tournament.

With the USWNT being incredibly competitive, it makes sense that Rodman will need time to bed into the team.

But if her first NWSL season is anything to go by, then we’d all better remember the name: Trinity Rodman.

We’ll be hearing it for a long time.