Trying to complete the WC sticker album for free, pt 1: The friend swaps 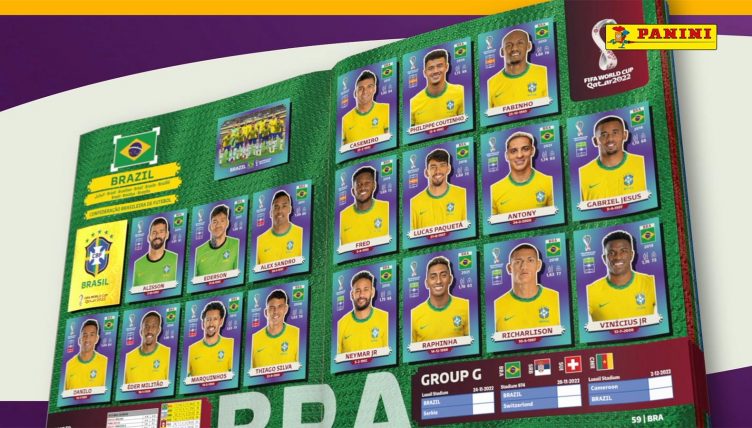 The boffins say it’d likely cost £883.80 to complete this year’s World Cup sticker album without any swaps – but we reckon it can be done for free by only swapping. Are we on to something?

At the start of October, like many of you, we bought the Panini FIFA World Cup 2022 Sticker Collection Starter Pack. But unlike everyone else, we decided that was the first and only bit of cash we’d spend trying to fill the album.

You can – and should – read about our logic and strategy here, but in a nutshell the idea is that we turn the initial 31 stickers from the starter pack into the 670 needed purely through swaps. We’re using shinies, team line-ups, star players and special stickers for leverage, and anyone needing one of our stickers to complete a page is going to have to stump up big.

Ben Stewart’s our man in the field, but how’s he getting on after his first month?

In these early days, it’s all about volume. I need to channel my inner Harry Redknapp and become the Panini wheeler-dealer.

I’ve found that picking up on people’s love for certain players or teams is an effective way to go about things. A Stoke fan needed Harry Souttar – that cost him five stickers.

After my first batch of swaps, I managed to raise my tally to 39. Having given away a total of five stickers for a return of 13, it wasn’t a bad start. And I somehow picked up a shiny Uruguay 1930 team sticker too, probably the most notable item I gained from those 13.

I also use these early exchanges to gather some intel on what the packs are looking like this year.

I met a mate already around halfway to completion who only picked up around 40 swaps from about 70 packets bought. That wasn’t great news. He also said he thought there’s been a really good spread of shiny, team and special stickers – really not good – but he’s been finding Tunisians hard to come by. It’s not exactly what I was hoping for, but I’ll take it.

One common theme, however, is that nobody is getting these extra collection stickers that Panini have added. There are 80 in total and I got a Robert Lewandowski in my very first packet in the starter pack, but nobody’s interested in it! Hopefully I’ll meet some hardcore collectors later and it’ll prove to be a valuable asset, but right now it’s pretty useless.

Progress started to stall after my initial burst of swaps and so I had to go back to the drawing board. A few minor swaps here and there were helpful, but I needed to pick up the pace.

Weighing up what I had available at my disposal, I had to land a big swap deal somewhere to properly get things into motion.

Luckily for me, a big break was right around the corner. A friend of mine had begun collecting the stickers when they were first released, but as the daunting task of collecting all 670 stickers became apparent, he soon lost interest.

As this was the case, he was more than willing to part with 17 of his swaps, raising my tally to over 50 stickers in total.

Now that I had more stickers at my disposal, I could properly get the wheels into motion.

I managed to flip that shiny Uruguay team I had initially picked up for six stickers, which I thought was decent going.

While I may be doing swap deals with friends, I can’t afford to be giving out any mates’ rates. I managed to land my biggest deal yet for Kingsley Coman, Christian Eriksen and Bruno Fernandes who brought in 23 stickers between them. It’s amazing what a well-known player and a bit of desperation can do.

After a couple more weeks of trading, I have managed to expand the tally to a grand total of 101. In total, that’s a 3.25x increase on what I originally started with.

As it goes, I’ve stupidly managed to pick up a few duplicates of my own – if anyone out there is interested in a Grzegorz Krychowiak by chance, hit me up. Not having the stickers in an album definitely makes it harder to keep track of what you have!

Having now separated each of the cards into their national sides, I have made steady progress with a few squads so far. Croatia and Serbia are two sides in particular that have quickly started to rack up.

But with just two weeks until the World Cup gets underway, it’s fair to say I have some work to do. Clearly, I do not have as many friends collecting as I used to in my school days. With 569 stickers still to obtain, it’s possible, just possible, we may have made a huge mistake in ever believing we could do this!

But the next step is to get to some swap events, swap online, and capitalise on any desperate friends as the tournament draws closer and they’re still searching for those missing Tunisians. So you never know. Keep checking Planet Football to see how we get on.

READ NEXT: An ode to Paul the Octopus, the true star of the 2010 World Cup