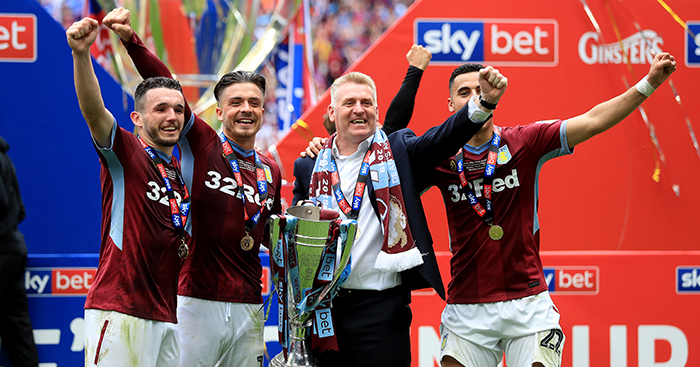 To be at Wembley for the play-off final between Aston Villa and Derby was to see something special. Not the game, because it never quite lived up to its billing, but Jack Grealish, parading the trophy in front his own supporters.

That vast bank of Villa fans away to the western end of the ground had been loud all day, but then, with Jeff Beck’s thumping chords playing over the tannoy and Grealish dancing at the supporters’ feet, the air was thick with symbolism.

Truthfully, it’s not quite that convenient. Grealish grew up in the club’s colours, but it’s the way he plays the game that matters. Many before him have had the privilege of representing the club they support, but few have been cherished in the same way.

Grealish is different. The lank hair, the socks around his ankles, that beguiling, sensory way he carries the ball; the excellence is as seductive as the imagery.

And what a time to be a Villa fan this must be. Their relegation from the Premier League wasn’t the result of a single, dreadful season but rather the end of a protracted cycle of doom.

Life became worse in agonising increments until finally, almost as an act of mercy, the club’s top-flight status was finally gone and, with it, the last vestiges of enthusiasm and self-respect.

The abiding memory of their decline is not necessarily the inhibited football they played on their way to the Championship or even Randy Lerner’s mood music statements that soundtracked the listless fall but rather that their slow death played out to thousands of empty seats. On average in 2015-16, 9,000 tickets remained unsold at Villa Park.

What a difference three years can make. 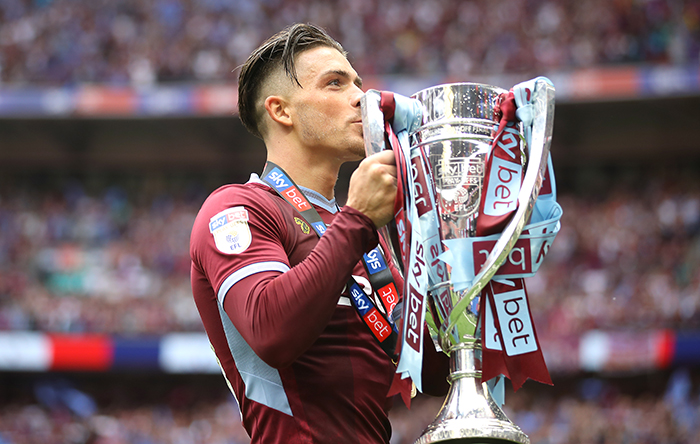 Although it’s not really three years, is it? As recently as 12 months ago, defeat to Fulham in the 2018 play-off final was a result likely to come with serious consequences. Dr Tony Xia had lost control of the club’s finances, HMRC was rapping at the door, and Villa were about to be plunged into the kind of post-parachute payment doom that teams can take a decade to escape.

But, then, even a year is too long, because, as recently as Christmas time, promotion looked a long way off. Wes Edens and Nassef Sawiris took majority control of the club last summer and made reassuringly bullish noises about its future, but the benefits of the order they created – the appointment of Christian Purslow as CEO in August and the installation of Jesus Garcia Pitarch as sporting director and Dean Smith as head coach in October – didn’t really reveal themselves until March.

March, when Villa ripped off 10 straight wins in the league, saw the club capture a momentum that they would ride beyond West Brom and Derby, all the way to promotion.

It’s been a very sharp dose of Vitamin B and the effect is that ebullient euphoria which flowed from the stands at Wembley. How could it not? Villa were back and back because of a star player who would have taken the club’s demise harder than anyone, and through the work of a manager who, as a fan himself, was probably Peter Withe in the playground.

A healthy grip on reality

So these are good times, but they should still be treated with caution. Fulham probably thought they were heading back to where they belong a year ago; Newcastle and West Ham have made similar assumptions in the past. The Premier League has had other ideas and been brutal in expressing them.

Encouragingly though, Villa show a healthy recognition for what next season promises to be. It’s a difficult reality to ignore given the very obvious squad shortages which exist (and which will be exacerbated by loans which have now ended), but it would be easy to do so given how exhilarating the past 12 weeks have been.

That they retain a grip on their reality is, most likely, the virtue of that initial restructuring.

Christian Purslow is not an easy man to warm to; he’s not a reluctant public figure. Nevertheless, the tone he’s set in the aftermath of promotion has been precise and right. There would be no parade for the play-off win, he quickly declared, because “we’re Aston Villa, we have parades when we win leagues and cups. Not when we get promoted, effectively third.”

That was one for the cameras to an extent, but elsewhere he’s been encouragingly pragmatic, tempering the soaring optimism and stressing that promotion, in the cold light of day, is really just the first step in a series which comprises a proper long-term objective.

More importantly, he has been quick to dismiss any suggestion that the club will run wild with their television bounty over the summer.

“This is the time to pause, apply a cold towel and contemplate carefully exactly what we need to do. We have to decide what additions to make this summer and which players will leave, but we have an outstanding sporting director in Jesus Pitarch and we’ll take a bit of time to nail all those down.

“This is not a moment to rush, to get carried away in euphoria.”

The Fulham precedent remains fresh in the mind, so hesitancy is only natural among the newly-promoted. But Villa are not an ordinary promoted side. They’re a former European champion, a seven-time First Division title winner and a founder member of the Premier League.

With the reputation, it would be very tempting to see promotion as an act of righteous restoration and to ignore the deeper and more difficult sub-texts of relegation.

They are sub-texts, but they’re real enough. Each year that a club spends outside the top-flight, they fall further behind. Each year at the level below is another season without the most generous sponsors, without the most lucrative kit deals and, invariably, without the opportunity to buy the best players. The mistake is to believe that parity comes simply from re-entering the division.

In Purslow’s mindset, though, exists recognition for what Villa are and what they are vulnerable to – or at least an understanding for how narrow the path forward is.

Time may prove this completely wrong, but there seems little inclination to attempt any sort of quantum leap over the summer, in which the club gamble huge sums of money in a quick attempt to restore their position of 10 or 15 years ago. There are no echoes of Tony Fernandes or Tony Khan, here, no hint that the club are about to write cheques they won’t be able to cash.

Material worth is an obfuscating issue in football now. The combined worth of Edens and Sawiris’ might well be astronomical, but personal fortunes and transfer budgets are not the same thing.

In any case, chemistry and cohesion has put Villa in this position, and vulturous agents, aware of those billions and now swarming to the Premier League sugar, will have little regard for that balance. Buy this flashy winger from Portugal, they’ll insist, have a look at my forward’s goals on YouTube; plenty of clubs have been robbed in exactly that way.

The club’s resistance will be crucial; it’s what’s so encouraging about these public intentions and it’s why, despite the personnel challenges which definitely do lie ahead, there should be great faith in this being the first of many steps-up.

The emotion at Wembley was real enough. Grealish said after that game that it had been the happiest day of his life, and there was no reason not to believe him. For the travelling fans, certainly those not old enough to remember Ron Saunders’ sides or 1981-82, it probably ranked near the top, too.

But both of these energies are vital: the warming intangibles uncorked by the true end of the Lerner era’s legacy but also this implied recognition of how far the climb back is and how, really, it hasn’t even properly begun.