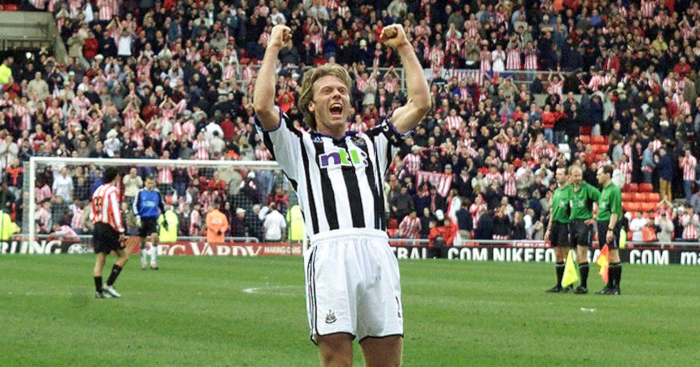 Warren Barton played under four different managers in his six and a half years at Newcastle United, experiencing both the good and the bad – and it’s fair to say he has some tales to tell.

Barton joined Newcastle in 1995 when Kevin Keegan was in charge, and just like the club’s supporters, he has fond memories of life under the England legend, with the Magpies building up but then famously letting slip a 12-point lead over Manchester United in Barton’s first season on Tyneside.

Barton had joined from Wimbledon for £4million, a British record fee for a defender at the time, and speaking from San Diego, where he works as a television pundit, he says Keegan’s ability to galvanise the team was evident from the moment he met to discuss the move.

“There was interest from Sheffield Wednesday, Everton, Celtic and Arsenal, but I got a phone call from my agent saying Newcastle wanted to meet us in London. It was the Bank Holiday Monday when Newcastle played Blackburn.

“Kevin came down after the game with Terry McDermott and he just said to me, ‘Come and join a big club.’ He is somebody you want to play for and for him to say he sees you as a future captain and that they’re going to sign all these big names, it was great.

“From that moment on, there was no hesitation and I wasn’t disappointed.”

That season started so well for Newcastle, and they looked set to go all the way from an early stage.

Barton says the atmosphere around the city helped spur everyone on until things started to go wrong towards the end of the campaign. Defeats against Liverpool, where they lost 4-3 in amazing circumstances, and a 1-0 loss at home to Ferguson’s Red Devils were their undoing.

“It was just so comfortable, so easy,” he says. “You turned up to training and there are six or seven thousand people wanting to watch you train. The city was very vibrant and we were walking on air. We just couldn’t wait for the next game, and I think that captivated the nation.

“Then things changed, that defeat against Man United came and reality hit home. We suddenly realised we were in a title race.

“There was a silence in the dressing room after that game. We’d played so well, hit the post, Peter Schmeichel made some great saves and there was an initial feeling of frustration.

“But Kevin being Kevin, he would always be optimistic. We could have beaten them, and on another day, a year later, we beat them 5-0, and that was probably the best game because we humiliated them.

“Against Liverpool, it was the same. To score three goals at Anfield was an amazing achievement. After the game, I sat with David Ginola, he had his usual cigarette, and we just couldn’t believe it.

Ginola had joined Newcastle around the same time as Barton, and though he was undoubtedly flashy, Barton says the Frenchman certainly had the respect of his team-mates.

”I remember meeting David; I was sat with Les Ferdinand having breakfast. Les is a good looking man and he’s getting a lot of attention, then David walks in with a linen shirt, sandals and sunglasses, like a movie star.

“Me and Les looked at each other and said, ‘F*cking hell, who’s this?’ But he backed it up.

“He’d do things I’d never seen before. He could take a 70-yard pass on his chest, control it, turn and cross it in one movement, it was phenomenal the way he played.”

In February of Barton’s first season on Tyneside, Newcastle added another flair player in the shape of Tino Asprilla from Parma, but as good as the Colombian was, that signing has often been offered up as an explanation for why things went wrong that year.

Barton can certainly understand that point of view.

“The worst thing that happened with Tino was him coming off the bench against Middlesbrough on his debut and changing the game,” he says. “He’d just arrived on a plane, it was snowing, he had a fur coat on and suddenly he was making the difference.

“He played his way into the team, and that moved so many pieces around. It took Rob Lee out of his position, took Peter Beardsley out of position and it had a knock-on effect. But it wasn’t Tino’s fault, Keegan made the decision.

“Sometimes you wouldn’t play him away because he was a liability, but if the tassel on his shorts came undone and his shirt was loose, we knew we were in business because that was when he was at his best.” 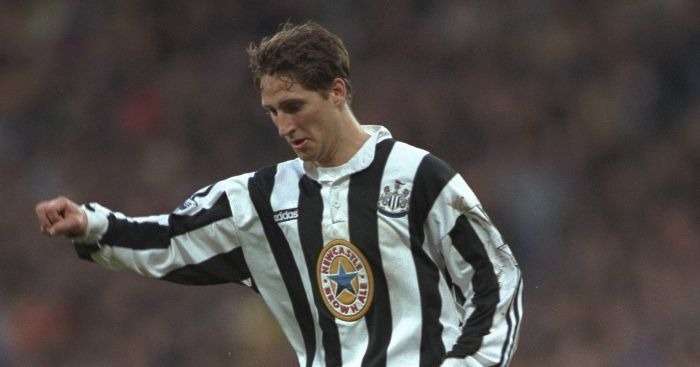 After losing out the previous season, Newcastle and Keegan made one huge splash ready for another push, bringing Alan Shearer back home from Blackburn Rovers for a world record £15million in June 1996, beating Manchester United to his signature.

Barton says that was the moment he and his team-mates felt that the club would be joining the elite, and they were desperate to do what they could to make the deal happen, including Ferdinand handing him the famous No.9 shirt.

“Any other club than Newcastle, and I think Alan has said it, he’d have joined Manchester United. Because of the pull of his hometown club and Kevin, he came here.

“We thought we had a real good chance with Shearer and Les. It was pre-season and we were away in the Far East, and Les said to me that Alan wanted the No.9, and he would give it to him.

“Initially, that request was a punch in the stomach, but he understood, and he was man enough to see the bigger picture.

“It was about that sacrifice to get Alan there because he was such a big player. I don’t know how many fans were there to greet him at St James’ – 10,000 or 15,000. He was a winner, driven by success, scoring goals and that helped the team.”

Shearer’s arrival didn’t have the desired impact. Just months later, Keegan would sensationally walk out on Newcastle and be replaced by Kenny Dalglish. The Scot, who had previously led Blackburn to the title, failed to build on the work that had been done before.

Aside from an FA Cup final and a  memorable night in the Champions League in 1997, when an Asprilla hat-trick downed Barcelona 3-2 at St James’ Park, there weren’t too many positive memories, with Ginola, Ferdinand and Asprilla all being sold.

It was in 1998, though, when Dutchman Ruud Gullit came in, that the troubles really began, especially with Shearer. And that all came to a head after an astonishing Tyne-Wear Derby a year later, when Gullit left Shearer out of his starting line-up.

“Kenny was great because he would protect you as players, sometimes too much. He didn’t criticise us, even when we deserved it.

“Then Ruud came in, with the sexy football title, which was strange to say the least. His knowledge about the game was brilliant, but his man-management, the way he treated people, didn’t sit well with a lot of the players.

“We tried to understand his philosophy, but when he said Sunderland vs Newcastle isn’t a big game, as a player you just thought, ‘You don’t get what Newcastle is about.’ 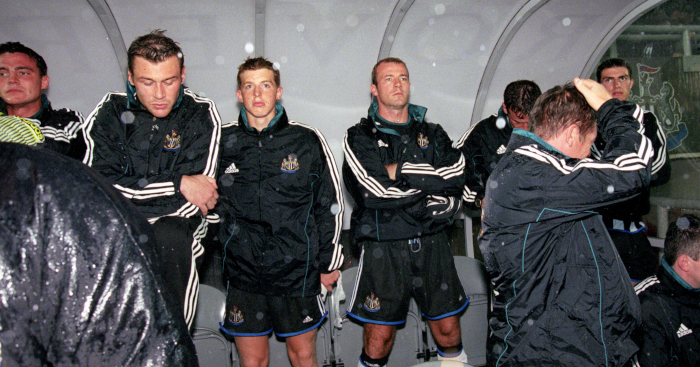 “Leaving Alan Shearer out in a game like that, you just don’t do it. We were doing set-pieces in training, attack vs defence, and Ruud being Ruud, he didn’t tell Alan himself, he sent Steve Clarke over to give him a bib, which meant he’d be a sub.

“We start doing the set-pieces, and Alan is against me, so I said, ‘Why have you got a bib on?’ He says he’s not playing and I just went, ‘You’re taking the piss aren’t you?’

“A bunch of us went to Ruud, ‘You can’t leave him out, and if you do, you’ve got to tell him.’ He said nobody told him he’d not be playing games, but when did he ever get left out at AC Milan?

“Ruud’s problem was, we went 1-0 up and then Sunderland score twice and win, but he went into the press conference and said, ‘We were winning until I brought Shearer on.'”

Gullit handed his resignation in almost immediately after, and Bobby Robson came in to replace him. The difference between the two was immense.

“To lose that game in the manner we did was devastating, but when Bobby came in, it was so uplifting, the gentleman that he was, and we win his first home game against Sheffield Wednesday 8-0.

“I signed a contract under Ruud, I liked him, but he did things like making the kitman (Ray Thompson) clean his shoes. I’d always been brought up to believe you treat everyone, from the security guards to the tea ladies, the same.

“I said, ‘Give me them,’ cleaned Ruud’s shoes and said, ‘Don’t ask him to do it, he’s the kitman.’ You treat people how you’d like to be treated and that is where he let himself down.

“Bobby had the package, he was great tactically, how he was with the players and the people in the club, the fans and the media. The best there has ever been, I learned so much from him about football and about life.”

Three years into his reign, in the winter of 2002, Robson was attempted to make the team younger. Barton, then 33, took his opportunity to leave for Derby County before ending his career with spells at QPR and back at Wimbledon, as they transitioned into MK Dons, and Dagenham and Redbridge.

But he looks back on his time at Newcastle with great fondness and expressed an interest in returning as a coach under Joe Kinnear and Dennis Wise, who were both heavily criticised by supporters when they were at the club under the very unpopular owner, Mike Ashley, back in 2008.

“If you respect the people of Newcastle, they respect you. The fans are amazing and they’re bigger than any of us. I love Joe, and I played for him for years, but he can rub fans, players and journalists up the wrong way. Wimbledon suited him, Newcastle is a different animal.

“He made a rod for his own back there. My question would be why not bring me in as a coach? If you wanted me to help you smooth things over… I offered myself to Dennis Wise and said I’d be a scout in America, and he said no.

“But the fans are brilliant. If you respect them, they’ll give their respect to you. I still love the club now and want them to do well, but I know what they want.”