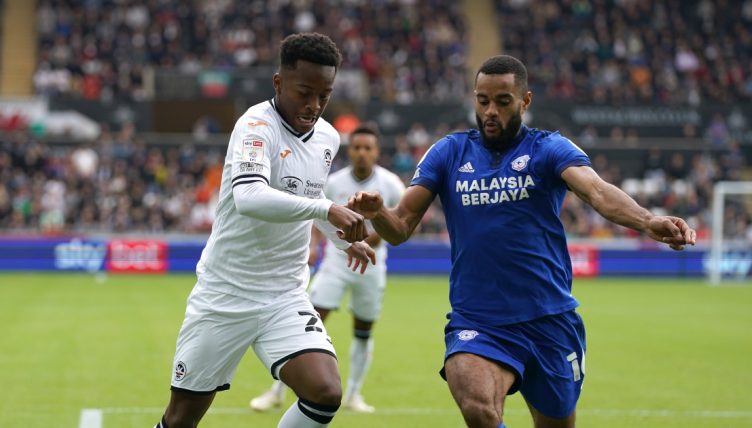 Over the last few years, things have finally been changing with Manchester United’s youth academy after years of neglect at what should have been the club’s crowning glory saw it fall behind competitors.

The quality of players coming through was still high, but they were ignored and borderline neglected by United. The emphasis was on superstars, making money and increasing the club’s global appeal, not developing young players. It led veteran United journalist Andy Mitten to write a damning piece decrying complacency and old-fashioned methods.

But now things have changed, and one player who embodies the new direction of the youth academy is Ethan Laird: just as he drives forward on the pitch, so too does United’s youth academy.

For him, attack is just as important as defence, his role that of a wide box-to-box midfielder more than a defender.

Laird was born in Basingstoke, joining United in 2010. He later played for the Under-18s and sparingly for the Under-23s, for whom he made his debut at just 16, before becoming a regular in the 2019-20 season.

There he impressed. He earned himself two senior appearances before his 20th birthday, against Astana and  AZ Alkmaar in the Europa League, and in January 2021 he went out on his first loan to MK Dons.

Ethan Laird completed 3 take-ons vs. Astana, more than any other player on the pitch.

That is something that probably wouldn’t have happened a few years ago. Instead, Laird would have sat around in the Under-23s longer than was necessary, being given a handful of chances in the first team and if he did not do something spectacular he would have been forgotten.

But on loan, first at MK Dons for the latter half of last season and now at Swansea in the Championship, he is honing his game and staking his claim to be a United player.

It was under Russell Martin that Laird first played men’s football regularly for MK Dons, and when the Scot moved to Swansea in the summer, Martin wanted to bring Laird back from United to rejoin him in South Wales.

At MK Dons, Laird showed off his attacking intent. Frequently he would drive with the ball forward, long runs, and dribbles a hallmark of his game. He cemented himself as the first-choice right-back, making 25 appearances in just half a season and notching up four direct assists.

Take a look at this run from his debut for MK against Burnley; that basic desire to get forward at all times was developed at the United academy, where he was encouraged to dribble and attack opposing full-backs.

The MK Dons captain Dean Lewington was full of praise for the young United man.

“He’s really improved since he first came here,” Lewington said at the end of the season. “He’s come on leaps and bounds. It’s just a shame we won’t get to keep him.”

The first loan allowed him to hone that attacking desire for the senior game and become the starting right back at a good Championship side in the form of Swansea.

A higher tempo has benefited Laird, who has already got four assists in 16 appearances this season.

When he receives the ball he looks to progress it forward, but when he must go sideways he runs into space either to receive the ball or to stretch the opposition defence.

Defensively he is sound and has frequently shown a desire to track back and recover the ball. Crucially the loans have allowed him to gather experience defensively, both in what to expect from veteran opposition players whom he would not have faced before and how to maintain structure and organisation with his fellow defenders.

…into the first team

At the end of this season, Laird will have 18 months of senior experience along with still having his youthful enthusiasm and desire to improve. That combination, along with his clear ability, will make him ripe for the next step of his career: the United first-team squad.

It may well be that Laird goes on loan to a Premier League team if there are any takers, but with United’s woes at right-back, it is much more likely the young man will stay with the first-team squad and fight for a place in the side.

Aaron Wan-Bissaka is inarguably one of the best defenders in the world when one on one with a player or when recovering, but positionally and going forward it is no secret he has to improve.

Laird will provide competition by offering exactly what Wan-Bissaka does not, and it would not be surprising if he took his place within two seasons.

Recent interviews with The Athletic’s Laurie Whitwell and with the Swansea official website further suggest Laird is a young man with his head screwed on, and he has the determination that will be required to break into the United first team.

United have always had academy players in the first team, even when times were bleak in the past few seasons, but it feels as if the club is now on the cusp of a new generation coming through that have fully benefited from a more modern, systemic way of developing talent.

Whilst there are players like Mason Greenwood whose generational ability simply demand first-team football as fast as possible or like Scott McTominay, whose enthusiasm and desire meant he took his chances, there are several players now coming through at Carrington who have developed more organically.

Like Laird, James Garner has earned a first-team place in the Championship, impressing with Nottingham Forest (although his position in central midfield will mean he may have to wait longer than Laird for a chance at United).

There are plenty of others too: Teden Mengi will likely go out on loan again in January after impressing at Derby last season, Ethan Galbraith is doing well at Doncaster and Tahith Chong was finally delivering on his promise at Birmingham until a bad injury meant he recently had to return to United.

Others, like Hannibal Mejbri, continue to develop with the Under-23s, where the club has consciously decided he is better suited to being training in and around the first-team squad rather than going out on loan.

Likewise with Anthony Elanga and Shola Shoretire, who have both made a handful of first-team appearances.

Then there are the players brought in for the future like Mejbri, something that just did not happen before.

Amad Diallo, Facundo Pellistri, Alvaro Fernandez and Charlie McNeil to name but a few; these players not only bolster the Under-23 ranks but will potentially be first-team players in the future, grown and developed by United.

All this speaks to a youth system that has finally modernised and which means that when Laird walks out at Old Trafford in a United shirt after being given the nod, it will be no shot in the dark.

He will be ready.