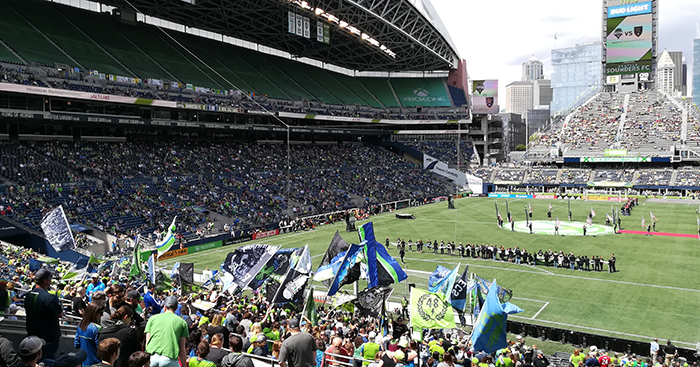 For most people, the club football season ended with the Champions League final on May 26. But that day I was in the US to watch Seattle Sounders v Real Salt Lake City. They do things a little differently over there.

Recently, Rob Conlon took in three MLS games on his trip to the States and was left feeling underwhelmed by a 0-0 draw involving the Sounders in which he was surprised – disappointed even – by the lack of frustration from the supporters inside the stadium.

Rob also hinted at a displeasure towards the fans using megaphones to generate an atmosphere, but while I have some sympathy with that point of view, my overall experience of a trip to Seattle’s CenturyLink Field was somewhat different.

This, as an Englishman on holiday in America, is my defence – well, part defence – of that very American experience.

Pre-game starts with a ‘Super Fan Doughnut’ from local chain Top Pot Doughnuts, iced in the team’s colours. With a coffee, obviously; this is Seattle after all.

The real action before the game is in Occidental Square, where a fan park is set up for supporters to gather. A band plays on a stage while people line up to pose for a photo in front of a large Sounders backdrop.

With the exception of Wembley Way, I don’t think it’s ever entered my mind that I might want a selfie to tell social media I’m on my way to the football. But this is not Cup Final day, this is second bottom versus fourth bottom in the MLS Western Conference.

I decide to watch proceedings with a little more inebriation on an adjacent bar’s ‘patio’.

Soon, a child is given the microphone to rouse the fans and a brass band starts up. The ‘march to the match’ commences.

Fans take a slow, 30-minute walk to CenturyLink Field with their scarves aloft. At the front are a couple of people with megaphones, leading the crowd with an array of songs. 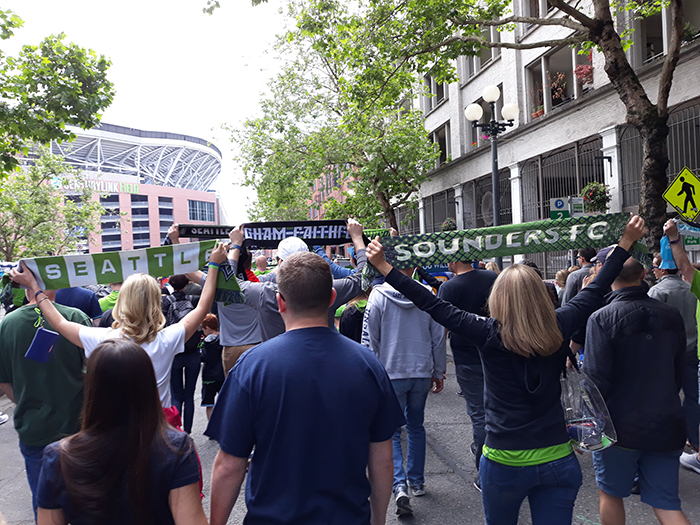 Americans certainly know how to do food and drink well, and the offering on the stadium concourses predictably puts a pie and lager to shame. Though if you want a meat pie, there is that too.

$11 for a pint of beer isn’t at all cheap, but there’s a good quality selection, and the added value is being able to take it to your seat; no hurriedly spilling Carlsberg down your chin a minute before kick-off here.

My ticket is in zone 120 in the uncovered south end of the stadium, where I’m fortunately spared the notorious Seattle rain on this sunny day in late May. This is a ‘supporter section’ where atmosphere is promised. 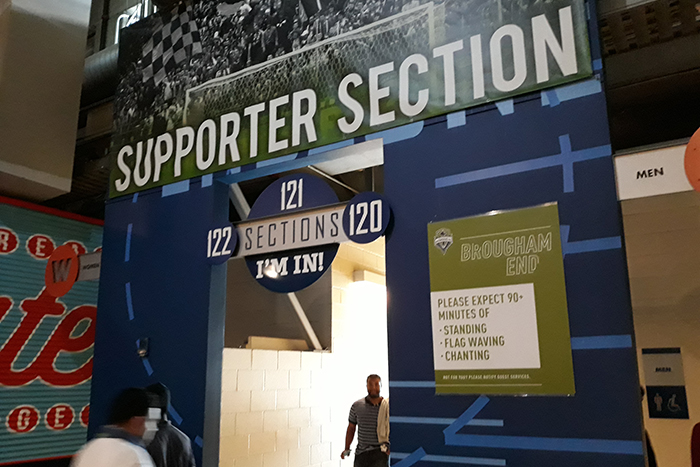 Opposite is an unusual, triangular stand with a big screen in portrait aspect atop it and skyscrapers behind. Two large grandstands running alongside the pitch are mostly closed in the upper tiers but are otherwise full, bringing the attendance to 39,508 – standard for the Sounders as one of the league’s best supported teams.

‘Smells Like Teen Spirit’ plays out on the PA system, of course, before the crowd as one hold their arms aloft to do the ‘boom boom clap’, better known as the Viking thunder clap from Iceland’s games at Euro 2016, as the players enter the field.

Baseball caps are removed for the national anthem, and then we can kick off.

Down to my left behind the goal is where the crowd is most animated. At the very front there’s a woman with her back to the pitch and a microphone in her hand. Her job – called a ‘capo’ – is to lead the chants, and she will do so all game long.

Others with megaphones are dotted around, also facing the crowd rather than the game. I consider the hostility someone bringing a drum into an English ground receives, and wonder just what the reaction would be if anyone was elevated to having a loudspeaker of any kind.

But here the crowd dutifully sings along, waving large flags the entire game too. It’s undoubtedly a lot of noise, but the peculiar thing about it is it’s entirely independent of what’s happening on the pitch. 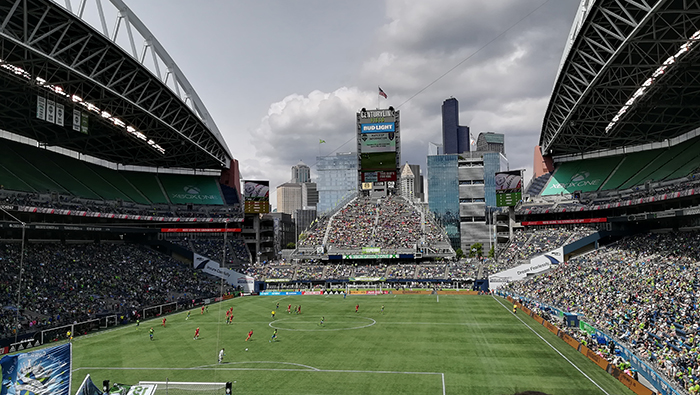 You can’t hear the excitement and anticipation as an attack builds or the collective gasps and panic as the ball nears your own goal. It’s just one endless soundtrack which could benefit from being used more sparingly, to allow space for the atmosphere to be generated organically.

Corner kicks do draw a response. The crowd sustain an ‘ooo…’ and point their hands towards one-time Manchester United trainee and Cardiff City flop Magnus Wolff Eikrem until he invariably scuffs it along the floor.

The songs themselves are a mixture of takes on old favourites (‘The Wild Rover’ etc.) and more distinctive tunes. Try getting fans in England to sing along to ‘La Bamba’ in Spanish; ¡para ganar los Sounders!

And unless any of it in that particular song went over my head, there doesn’t appear to be any swearing either.

I’ve yet to mention the game itself, with good reason. The t-shirt weather brought to mind a pre-season friendly, and the play resembles one, too.

RSL fail to take a shot in the first half, but there is no pressure from the Sounders either. Lone forward Clint Dempsey barely seems to touch the ball, let alone leave defenders chasing the back of his shirt bearing the incongruous No.2.

Fifteen minutes into the second half, the visitors score, but this event could have easily passed you by with no change in tone from the home crowd noise and the absence of away end support.

There’s no comeback from the Sounders as the match ends 0-1. The capo gives an impassioned speech at full-time to rally the fans to keep coming back louder than before.

Truly, this is what the day seems to be about: exhibiting your loyalty and dedication. It almost feels more like a church gathering than the viewing of a sports match.

The unity of the fans arriving at the game en masse and singing from the same hymn sheet was a real pleasure to be a part of. It’s sad to see that unity being lost at a number of English clubs where factions have set in and anyone with a Twitter account becomes a self-appointed spokesperson for their own crowd.

What is a football club if not its community of fans who share in the same experiences and emotions?

It would undoubtedly feel too contrived to introduce all of the elements I encountered to a matchday in England. But the fans here – who wear their team’s colours around the city all week long too – seem genuine in their support.

I wouldn’t be so dismissive of doing more to capture that in our own way. Just without megaphones.