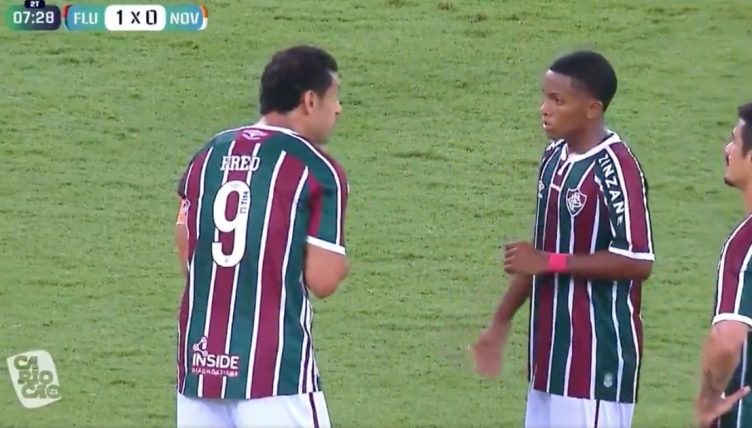 In eight seconds of individual brilliance that broke the deadlock seven minutes into the second half of Fluminense’s game with Nova Iguacu, everything good and everything bad about the first few months of the year in Brazilian football was perfectly summed up.

In Brazil, February, March and April are taken up by state championships, which are a product of a time when travel was too arduous to permit a national Brazilian league. Whereas once such local competitions were the be-all and end-all, now, with the game’s financial polarisation and the national league taking precedence, they pit a few local giants from each state against relative minnows.

It’s like the first few months of the English season being taken up by regional leagues that would see Chelsea, Tottenham and Arsenal play Barnet, Leyton Orient and Dulwich Hamlet before the Premier League gets underway. The result is scores of awful games as smaller clubs desperately defend draws.

Yet the state championships do present an opportunity. In them, big clubs’ young players can get minutes on the pitch against manageable opponents. Fluminense, one of those big clubs, are currently using that opportunity in the Rio de Janeiro state competition. And there is one young man who is the name on everybody’s lips: Kayky da Silva Chagas.

On Sunday against Nova Iguacu, one of the minnows, Kayky picked up the ball on the corner of the penalty area with the score at 0-0. Despite his advanced position, there were nine Nova Iguacu players between him and the target. But what might have seemed off-putting to some was an invitation to Kayky.

He darted between the first two orange shirts before threatening to cut in onto his stronger left-foot, causing two defenders to collide. He turned to his right, taking the ball past another flailing body. The angle was tight, but he could now see the goal, and the 17-year-old dinked it perfectly over the ‘keeper’s outstretched body as he rushed forwards in a vain attempt to save the shot.

The immediate reaction was as inevitable as the less immediate one. First, the unhinged scream of ‘Golaco! Gooooooooooooooooooooooolllllllll!!!!” from the commentator. Later, the tidal wave of hype on social media.

Not so long ago, Kayky’s goal would have made newspaper reports and television reels in Brazil but made little noise elsewhere. Kayky would still have been an unknown quantity to all but a very select few Fluminense fans and he would be a long way from international notoriety.

Yet the world being as it is in 2021, Kayky is already a Manchester City player (or as near as damnit), he is already being followed by thousands of journalists, Twitter scouts, real scouts and football fans the world over, and hundreds of thousands of words have already been churned out about him by the hype-content industrial complex (of which the writer of this piece is admittedly part).

Any nitwit with an Wi-Fi connection (again, the nitwit writing this included) has been able to watch him regularly for months. His Fluminense Under-17 games were last year broadcast for free over the worldwide web (see below) and he was the standout player in a good number of them.

The fanfare around Kayky has, as a result, already reached fever pitch. And, as part of that fanfare, one of the aforementioned nitwits with Wi-Fi has christened him ‘the left-footed Neymar’. The line has been picked up and run with: forget who said it, forget to check whether it’s at all accurate, forget the pressure it heaps on young shoulders, let’s jump on it.

Bollocks to it, while we’re at it, let’s go all out. KAYKY IS THE NEW, LEFT-FOOTED, BABY-FACED MARADONA-NEYMAR-MESSI-PELE-HYBRID SUPERSTAR WHO’S GOING TO SCORE 250 TIMES A FUCKING SEASON.

He’s South American, he’s 17 and he’s just scored a really, really good goal, so he must be, mustn’t he?

Let’s look back at the goal again, though. Between the commentator’s wail and the internet frenzy, there was an interesting aside, one that’s worth a recap. And like all the best interesting asides, it involved Fred. Yeah, that Fred. Yep, World-Cup-2014-standing-still-hoping-the-ball-came-to-him Fred. He’s still playing. Don’t laugh.

Fred has been around the block. He’s been around it twice. Then he’s stopped off for a cafezinho, got back on his bike and gone around it again for good measure.

He’s experienced all the travails and glories, all the highs and the lows that professional football has to offer. He’s been the wonderkid, he’s won three league titles in France and played in the Champions League, he’s come back to Brazil, become the domestic league’s fourth-highest scorer ever (just ahead of Zico), and won eight more trophies. He’s even won two shiny pots in the yellow of the Selecao.

He’s experienced the other side, too. In 2014, with the world watching, he was the figura di merda, as the Italians say – the immobile, impotent striker drowning in a sea of ignominy as Brazil crashed out of their home World Cup.

And after Kayky had scored, Fred, two decades his senior but now his team-mate at Fluminense, wandered over to the young pretender, gave him a congratulatory clip around the ear and said four words: “E isso ai, cara.”

E isso ai, cara. In English, that’d be something along the lines of, ‘That’s it, mate.’ Yeah, nice one. Decent effort, lad. Keep it up. Come back to me when you’ve had a 20-year career and scored 400 goals.

A few minutes later, Fred was talking to Kayky again, giving him an earful for not doing something or other, putting him in his metaphorical place.

It was, at its most fundamental level, a nice thing to see.

Kayky’s great. Really, seriously. We were being flippant before but he’s genuinely got bags and bags of talent. He’s a stunning dribbler, he has fine close control, an eye for a pass, and the coolness to finish.

He showed that in youth football and he’s now starting to show it against the Brazilian Barnets and Leyton Orients presented to him in Campeonato Carioca. The week before the wondergoal against Nova Iguacu, he’d scored a less talked-about but perhaps even more aesthetically pleasing effort against Macae.

The finish was brilliant; a delicate, spinning, curling effort poked around the goalkeeper like Ronnie O’Sullivan would swerve a cue ball around a peskily positioned colour.

And obviously people get excited when a good player emerges. Especially, like City fans in this case, if they might be able to see that player up close in the near future.

But when does it all get a little too much? When does healthy excitement become premature, potentially damaging hysteria?

Kayky has achieved little so far. He’s a young man who appears to enjoy his life and is very good at one thing, which happens to be kicking a football. But he is not the ‘left-footed Neymar’ any more than he’s the 5’6″ Carsten Jancker or the footballing Ronnie O’Sullivan or any of the dozens of ‘new Maradonas’ were actually a reincarnation of El Diego.

Fred wants the best for Kayky and knows that not letting him get too carried away with everything, not letting him believe the hype, will in the long run be beneficial. Lord knows how many talented players Fred’s seen fall by the wayside.

So let’s enjoy Kayky. Let’s cheer him on and be happy when he does a goal or makes a grizzled defender look like a bumbling fool. But perhaps let’s not get too disappointed if, for whatever reason, he loses his way. Let’s be a little bit more like Fred. A clip round the ear and an ´E isso ai, cara’ might sometimes suffice.