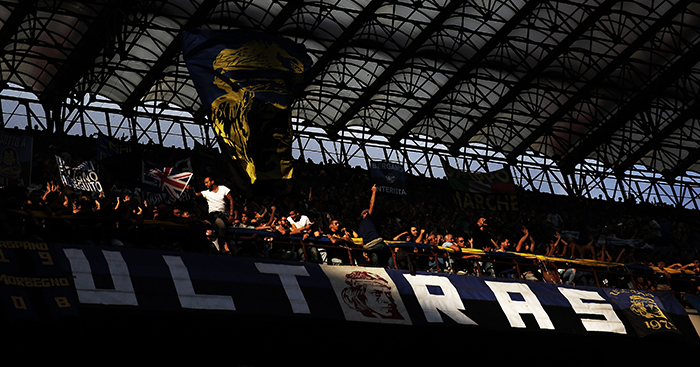 The Tessera fan card has been decimating away fan attendances in Italy for the last eight years, but signs are starting to emerge that it could be on its way out – and the Ultras are returning to the Curvas regardless.

After decades of violence in Italian football, in 2009-10 the authorities finally took action. Initially affecting Juventus, Milan and Inter, the Tessera del Tifoso, an ID card, was introduced as a way of identifiying fans of each club and knowing who was travelling to away games.

Unsurprisingly, there was huge resistance from fans, with almost every single club in Italy boycotting away games in protest.

“Sure, I wanted to go to the away games but as a group we decided we weren’t criminals and didn’t agree, so we stayed away,” Gino, a Genoa Ultra says.

“Many of us just wanted to support our club yet we were made to feel like animals. They wanted the Ultra mentality to die out.”

Not every set of supporters stopped attending, though. In fact, my club, Hellas Verona, are one of the few clubs that have continued to be backed away from home in any sort of numbers since it was made compulsory to require a Tessera card to travel in 2009-10.

“We didn’t agree with it (the Tessera), but if we stopped going that is what they (the authorities) wanted, a perfect answer for them,” Davide, a member of Curva Sud Verona, says.

“So we carried on and we showed other clubs that we can still travel, cause problems even with the Tessera.” 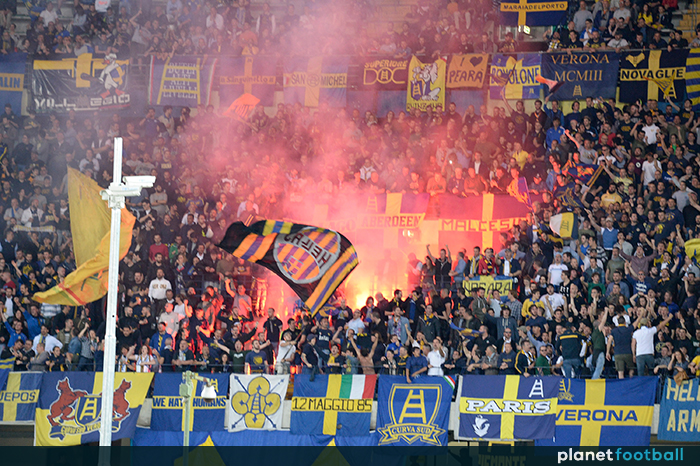 Verona aren’t a particularly big club, but because of the reputation of the fans, they are seen as a big game for almost everyone. Even for expected one-sided fixtures like Juventus-Verona or Napoli-Verona, it is a fixture all Ultras mark out.

At the start of the 2013-14 season, Verona’s first in Serie A for 12 seasons, Milan Ultra group Curva Sud issued a statement imploring all Milanesi to travel to Stadio Bentegodi, saying that Verona’s are some of the best Ultras in Italy and that Milan must make a show at the game. After the 2-1 Hellas win, hundreds of fans clashed inside and outside the stadium.

Then there is Livorno. Verona and Livorno are not teams you might associate as rivals, separated as they are by hundreds of kilometres, Verona in the north and Livorno an old port town in Tuscany, but the two sets of supporters are polar opposite in ideals; many Verona fans are right wing and Livorno’s Curva is staunchly on the left; indeed many of their banners and choreography are in Russian.

Back in 2011-12, I was among around 900 Verona fans who made the journey to Livorno. We had just returned to Serie B after four seasons in the third tier, and this was the game many were looking forward to most. 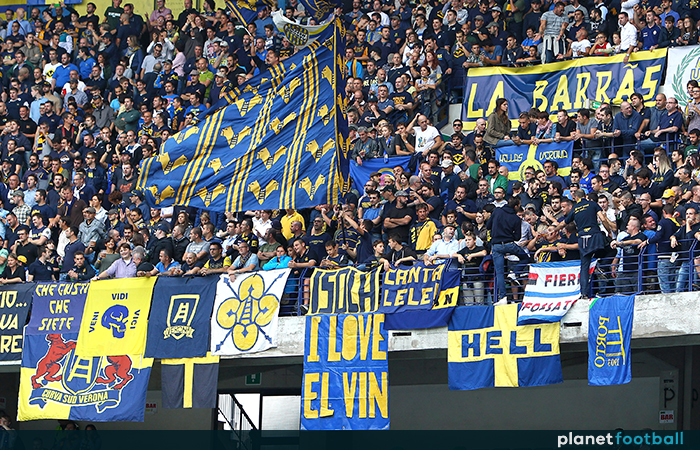 Initially being held on the motorway in a delaying tactic by the police, when we did arrive in the town, hundreds of Veronesi exited our buses and marched the final two kilometres to the stadium.

It was obvious we wouldn’t make kick-off, but then the actual game was of little importance to many of the fans. As Verona fans sing at almost every game, “We don’t give a fuck about this match.”

We arrived 10 minutes after kick-off to be met with piercing whistles and a chorus of “Verona, Verona, Vaffanculo”, an invitation to simply fuck yourself.

The game was eventful enough – Hellas won 2-0 and Livorno finished with nine men – and after being held for an hour after the final whistle, we were bussed out surrounded by riot vans and police cars, as well as a police helicopter following us for around 20 kilometres up the motorway until they were satisfied no Livorno fans would attempt to throw anything at our vehicles.

The day passed off almost without incident aside from some stone throwing and minor clashes with police, but that was par for the course at this type of game and hardly even mentioned by the papers.

More importantly, the defiance of the Verona fans has inspired others to return to away games. In the last year, Lazio, Roma, Napoli, Genoa, Torino and Brescia have all started travelling again.

Lazio’s Curva Nord released a statement last season saying that due to the constant attempts from police and government to ‘stick a knife in the heart of the fans’, they would return to ‘show that we are more alive than ever’.

“They made us take our shoes off before entering our Curva, had surveillance everywhere and put a huge plastic barrier down the middle of Curva Nord to try and stop us,” Mattia, a Lazio fan says.

“We were against the Tessera and we still are, but we had to return to show that we are stronger than any shitty laws and pieces of plastic. More and more are following our lead.” 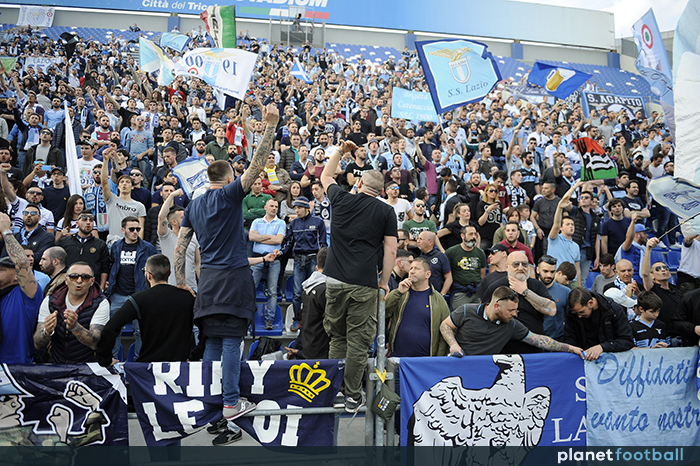 Gino explained Genoa’s stance, saying: “Our Ultras saw that some clubs such as Verona were still being themselves, causing trouble at some games, supporting their team and city with passion, so we returned to away games.

“Like most Ultras we don’t agree with it, but the Tessera won’t exist soon, too many are coming back and it will be like the old days.”

Ah the old days. Is it the good or bad old days? “I don’t agree with him,” Mattia says of Gino’s comment. “It won’t be like it used to be, when we could turn up in our thousands and fight with the police the entire match.

“But it is good to see away fans at games again and the atmosphere and tension return. I even saw a decent number of Udinese guys at a game the other week, and they have shit ultras!”

For all that the Tessera has done to quell violence, which is obviously a good thing, Italian football has lost something that made so many of us fall in love with it. The matches were often poor, but at least the fans provided entertainment with their flags, songs, flares and at times hilarious banners. 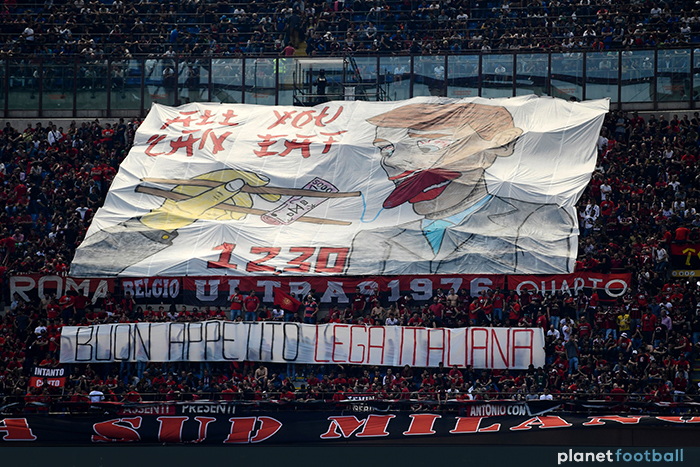 Where before teams were travelling with two or three thousand to away games, after the Tessera was introduced there would literally be 30 or 40.

At one Verona-Empoli game I attended, where the Tuscans needed a win to secure a play-off spot, around 100 travelled.

“Yeah, we still sang against the fans and teams we faced, but it’s not the same without away fans” says Davide, the Verona Ultra.

“I remember Brescia came here some years ago with about 1,000 fans, more than most teams had brought for a few years, and Bentegodi (Verona’s stadium) was incredible that night.

End of the Tessera?

Earlier this season, Inter-SPAL in Serie A was the first game in Italy’s professional leagues since 2010 in which the Tessera wasn’t required for away fans. As a result, around 3,000 fans travelled from Ferrara, a sign that the authorities are relenting.

Either way, more and more Ultra groups are coming back after years of not travelling. Only a handful haven’t returned to the curvas, with Taranto, Sampdoria, Cagliari and Catania among them. 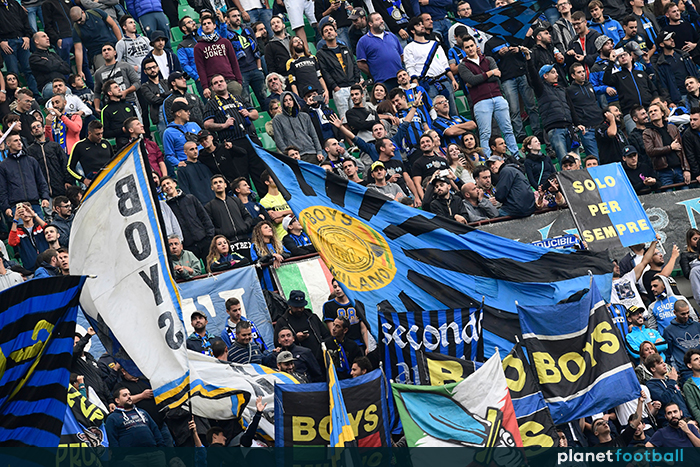 “I think they want to come back but are thinking they’ll wait until it’s finally abolished,” Gino says of his fellow Genovans Sampdoria, adding: “It’s been a dark era for Ultras but thankfully it seems we have beaten it.

“Many Ultra groups contacted us (Verona) and explained that they saw we could still be ourselves and that’s why they returned. Although we are rivals on the terraces, we are together against these stupid rules and will work together until it’s gone.”

Mattia the Lazio Ultra won’t returning any time soon having been arrested following a Lazio-Napoli game two years ago and given an automatic three year ban from all football stadiums, but he too is bullish about the future of the Ultras in Italy.

“We will never die,” he says. “They’ve tried many times and many different ways, usually after a serious incident. But we will always be there for our teams and cities, no matter what restrictions they impose. They don’t understand this way of life.”

Italian football is on the rise on the pitch, enjoying more exposure than at any time in the past 10 years, and now things are on the up off the pitch, too. Away sections are full, games are entertaining again and there is more competition for the Scudetto. Serie A is back.

Gigi Simoni interview: Inter, Ronaldo and the great controversy of 1998

A forensic analysis of George Weah’s solo goal against Verona, 21 years on