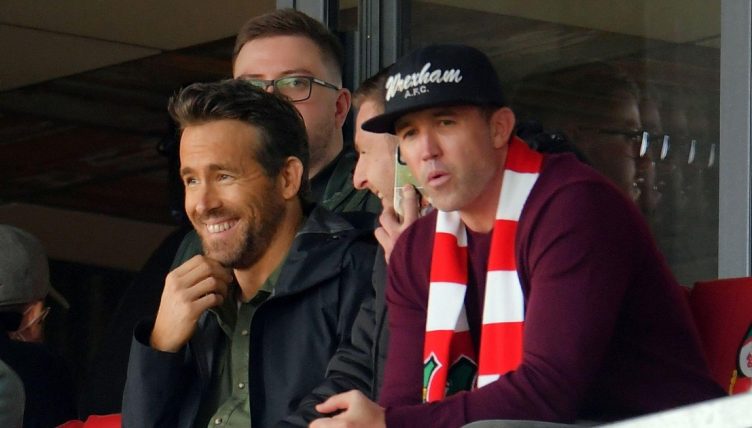 “It’s the question we’ve gotten more than any other,” read the letter to supporters in the local newspaper.

“Why Wrexham? Because you deserve it.

“For 158 years of fearless devotion.

“For building a club and a community the world should know about.

“For weathering storms that would have broken lesser towns.

“For your cheers, your courage, your traditions, your warmth.

“And because a little over a year ago, you took a chance on two Hollywood jokers who knew precious little about Wales or football.”

These are not empty sentiments, not the kind of disingenuous flattery sent out by corporate owners to fans of clubs across the country.

Ryan Reynolds and Rob McElhenney, as strange as it seems, really care about Wrexham AFC.

They have, since purchasing the club last year, forged a connection with the fans unlike any other in British football.

From the outside, there is still plenty of bemusement. Two Hollywood celebrities becoming enamoured with a Welsh football club languishing in non-league was an unlikely news story even in the pandemic era.

Cynics would claim the intention was simply to buy a football team in the lower leagues and tell the story – in documentary format – of the rise through the divisions.

Even if that was the case originally, both Reynolds and McElhenney have grown more and more invested with each twist and turn throughout an entertaining National League season.

McElhenney, star of It’s Always Sunny in Philadelphia, is a self-proclaimed sports enthusiast and was the catalyst for the takeover, so his delight at every Wrexham win has been unsurprising.

Reynolds, meanwhile, seemed a little more contained early on, content to work his contacts in the background and bring in lucrative sponsors like TikTok.

By now, though, he is equally obsessed. His attendance at the Raceourse stadium for last month’s FA Trophy semi-final against Stockport, when Wrexham’s top scorer Paul Mullin found the net in injury time with a glorious lob, seemed to be the moment he truly fell in love with football.

The visibility of both owners has made them immensely popular. Their humorous and excitable posts on social media, their warm personalities when visiting Wrexham, their desire to help in the community and better the town: all of this has left supporters infatuated.

There are perhaps no owners in the country as popular as Ryan and Rob. Some may scoff at that and suggest this is all a little saccharine.

But Wrexham fans are not concerned. After years of devious and incompetent owners, this is truly refreshing and has brought a renewed sense of optimism.

And, crucially, Reynolds and McElhenney are not venture capitalists, not a corrupt state hoping to use football as a way of cleaning their tarnished reputation. They are not shady oligarchs or weird tech billionaires.

They are likeable and genuine, and clearly want to be a part of the footballing journey as much as any fan.

And the first season has been promising. Wrexham were beaten to the National League title by Stockport County, another club who have enjoyed significant investment in recent years.

But a second-place finish means a chance to return to the Football League via the playoffs. There is also a trip to Wembley on the horizon as Wrexham take on Bromley in the FA Trophy final this weekend.

Guess we wanna do it the hard way.

We’ve had an incredible season so far. @Wrexham_AFC Let’s dust off and go finish it!!!! 🏴󠁧󠁢󠁷󠁬󠁳󠁿

The success would not have been possible without the club’s new spending power. Mullin was the marquee summer signing and his return of 26 league goals has proved invaluable.

The likes of Ben Tozer, Aaron Hayden, James Jones and Ollie Palmer, all signed from Football League clubs, have impressed too.

Reynolds and McElhenney have claimed the aim is to reach the Championship at the very least, though the first and perhaps most difficult milestone is promotion from the notoriously difficult National League.

Whatever happens, though, Wrexham fans will feel fortunate.

A club that was close to going out of business just over a decade ago can now boast the best owners in football.

12 of the biggest U-turns in football: Mikel, Rooney, Gerrard…