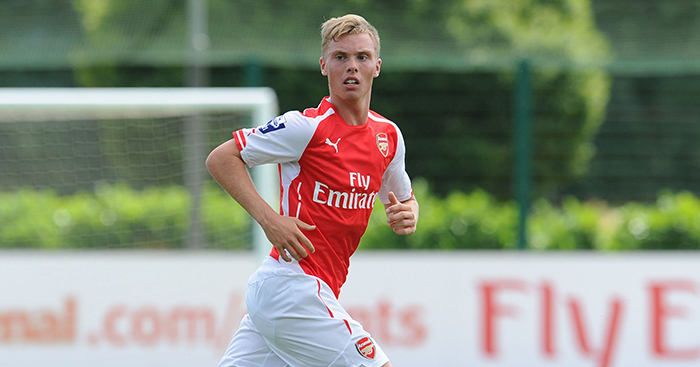 Renny Smith was part of both the Chelsea and Arsenal academies as a youngster before moving on to Burnley, but it is in Italy where the Englishman has found a home as a footballer.

Smith was viewed as an exciting prospect while at Chelsea and rejected approaches from Manchester City and Liverpool to join Arsenal as a 16-year-old in 2013, but even at a club that looks to give opportunities to young players, the midfielder tells a familiar story of failing to break through.

He went on to join Burnley on a three-year contract in 2015, but like several others we have spoken to in our Brits Abroad series, Smith found it difficult to adapt to life in the Football League having been brought up playing a particular style of football at two elite clubs.

He left for Vicenza after little more than a year at Turf Moor and is now playing for his third club in Italy, Suditrol in Serie C. Still only 21 and despite his previous experiences, he’s hoping to impress enough to eventually earn a move back to England.

No Chelsea or Arsenal chance

“With the Chelsea academy, for me, you get the feeling they buy in their talent,” Smith says. “It’s not a case of making and creating talents and that’s how I felt when I was there.

“It’s tough enough getting through at Chelsea with all the money they have in the first team; if they need a player they’ll go spend £40million, no problem.”

Smith enjoyed his time at Arsenal much more, and though he was released without ever being given a chance in the first team, he was given the opportunity to train with some of his heroes, an experience he’ll never forget.

“Arsenal wasn’t as bad, they don’t spend as much money on young players as Chelsea did and it’s more of a case of developing the talent they’ve got.

“Two players I admired a lot (when training with the first team) were Alexis Sanchez and Santi Cazorla. Sanchez for his ferocity and intensity in training and in games.

“I love to see players who have a passion when they play and a smile on their face. I looked up to him for that, and his technical ability and everything else: his one v one and speed of play.

“Cazorla has incredible technique and intelligence. He used to stay after training to practice corners with his left and right foot; he would take a corner as well with his left as his right, which only a few players can do. He’s incredible, he was the best trainer for me.”

Smith was 18 when he signed for Burnley, but he struggled to adapt to what Sean Dyche wanted from his midfielders and never played for the Clarets’ first team during what proved to be their promotion season.

“It was a lot of long balls, second balls, and as a midfielder you’re watching the ball going over your head a lot, which was quite frustrating,” Smith says.

“I didn’t settle in that playing environment and that’s why I left early because we were training long balls and to hit balls into certain areas, to win headers.

“I learned a lot, but at the same time it wasn’t a game I enjoyed. I managed to make the most of my time there, to learn about how Sean Dyche wants to play, so I took something from it, but as a style of football, it’s not for me.

“It’s working for him at the moment, he’s doing really well in the Premier League, all the players are buying into it, and they’re doing well, but they’re just not playing the football I enjoy.

“For me, football is about winning but about enjoying it and entertaining at the same time.”

Smith, born in Surrey but a former Austria youth international thanks to a grandparent, was loaned out to Swedish side GAIS in February 2016, and it was a move which made him realise he might be more suited to playing abroad at this stage of his development.

“I wanted a change, I wanted to start my career and play first-team football,” he says. “I knew some players in Sweden and they said it was a good opportunity.

“They have big crowds, it’s technically very good, and it was a great, positive experience for me, my first experience of first-team football.

“I learned a lot, trained really hard, and it was great playing in front of big crowds, so it was really good for me as a young person.

“A lot more younger guys are now moving abroad: Chris Willock was from Arsenal and he’s gone to Benfica; Kaylon Hinds has gone to Wolfsburg.

“A lot of players now are trying, as they look at the Football League and see that style is not suited to the young Premier League players. They go there and they’re alienated by the style of football the manager wants them to play. The manager needs points, needs wins.

“It’s just a question of whether you have the will to do it. It’s tough moving away, you’re away from your family, your comforts; it’s a different language, different culture, different everything, it’s not easy at all.

“If you’re prepared to make the sacrifices, put in the dedication and make football your lifestyle, not just moving to a club as you live locally, then you’ll do well. Hopefully we’ll see some English players, including me, that will be doing well abroad.”

Smith first joined Serie B side Vicenza, before joining Mantova on loan and then moving to Serie C side Sudtirol in the summer. He hopes to progress up the pyramid and one day return to his native England.

“Italy is known for its tactical knowledge and I thought I could learn a lot,” he says. “I think being quite technically-based, compared to the lower leagues in England, it might suit my style of play. And being a young player, I might receive more chances in the first team.

“Also, a lot of scouts from Serie A come to watch Serie B and C games. I thought it could be a good opportunity for me to move up in Italy, if I put good performances in.

Can you name the 30 players with the most sub Premier League appearances?

“It was a difficult choice for me to move to Italy, but I’m making the most of it and working really hard. I’ve learnt the language, I’m doing interviews in Italian, I’m managing to speak to people really well, make conversation, which was really tough at the start.

“I’ve been here now for over a year – at the start it’s always difficult, but you persevere and things get easier. I am getting more used to the style and the culture, which is positive.

“I want to come back to England, that’s the ultimate goal. I want to be playing in the Premier League, if not the Championship. To do that I will need to be in Serie B or A, as a lot of international scouts watch those leagues, not such much Serie C.

“I need to perform well, work hard with the hope of scouts seeing me from Serie B or Serie A teams and then move on from there.