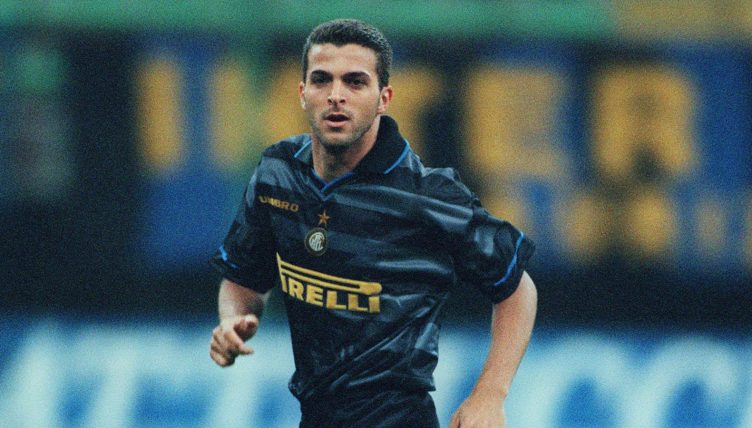 Sat in the cafe in front of the stunning art deco facade of Sao Paulo’s Pacaembu Stadium, a smile breaks across the face of Ze Elias as he recalls the May night in Paris when he and his Inter team-mates swept Lazio aside to win the 1998 UEFA Cup.

“For me, personally, it was the most important [trophy].”

Victory, of course, is always sweet. But when it comes in the face of adversity, the sense of fulfilment is greater. That tournament, for Ze Elias as an individual and for Inter as a team, had been a tale of reversals and redemption.

“The priority at the beginning of the year was the league; the team was made to win the league,” Ze Elias says. “So, in the games against Neuchatel Xamax and Strasbourg, they put out a second string.

“It was only when they realised that we could go on to win it that [Luigi Simoni] started playing the first team.” 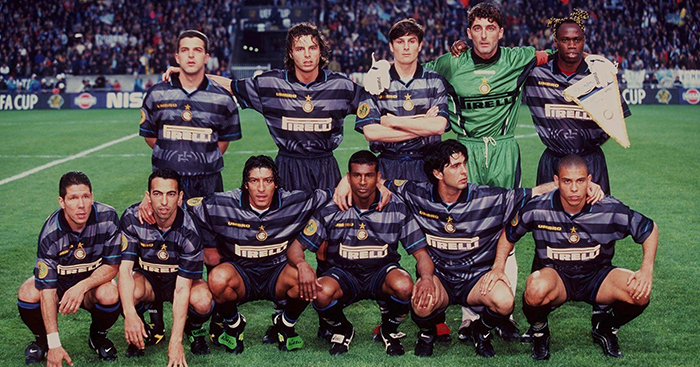 That decision to prioritise Serie A benefitted Ze Elias, who was at that time only 21 and part of that second string. The UEFA Cup was his chance to force his way into contention for a place in the first team.

“At the beginning of the year, I wasn’t even in the reserves,” he says. “I was sitting in the stands, watching. So I kept training and training and my first break came against Neuchatel.”

It was an opportunity he grasped with both hands, scoring the second goal of the match to seal a comfortable 2-0 win away from home: “From then on, I started getting more chances to start games.”

“The campaign was fantastic because we managed to overturn some negative results. Against Lyon we turned the game, there in Lyon. Against Strasbourg, too, we had a few problems and managed to reverse the situation.”

In the second game against Strasbourg, in Milan, an illustrious trio of Javier Zanetti, Diego Simeone and Ronaldo all scored to overcome a 2-0 first-leg deficit. 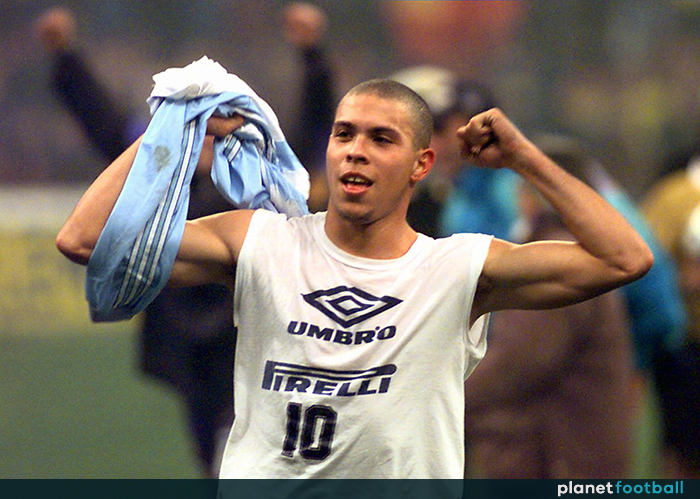 That set up a showdown against Schalke, a replay of the previous year’s final, which Inter had lost.

“It was war. Marc Wilmots and I…” Ze Elias’ sentence tails off, but he bashes his clenched fists together and his point is clear.

“There were punches, there were kicks. There weren’t so many cameras at that time, so the game was a lot more intense.”

The Inter of the late 90s had a distinctly South American flavour to their squad, and in the semi-final against Spartak Moscow, Ze Elias was joined on the scoresheet by compatriot Ronaldo and the magnificent Ivan Zamorano, guaranteeing a 4-2 aggregate triumph.

It was, of course, Serie A’s golden era, and Ze Elias is keen to highlight the quality of opposition he faced on a weekly basis.

“We had Bergomi, Zanetti, Simeone, Djorkaeff, Ronaldo and Zamorano. You go to Milan, they had Costacurta, Maldini, Albertini, Boban, Weah, Savisevic. Juventus had Del Piero, Conte, Di Livio, Zidane. Legends, only legends. It really was a strong league.” 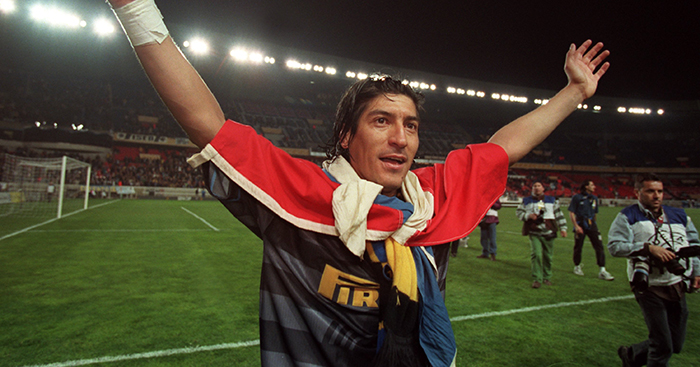 READ: A tribute to Ivan Zamorano, a man so committed to No.9 he wore 1+8

When asked to choose the most belligerent of his on-pitch rivals, though, he doesn’t hesitate for a second: “My battle was with Edgar Davids. He was horrible. Horrible. He always came in over the top, trying to hurt you.”

Given the power of Italian football at the time it was fitting, then, that Inter’s adversary in the UEFA Cup final should be one of their domestic rivals: Lazio.

The Biancocelesti were the favourites, but Ronaldo had other ideas.

“I roomed with Ronaldo, and before the final they chose two players from each side to speak to the press,” Ze Elias says.

“From Lazio it was Nesta and Mancini, and they said that if one of the two sides really deserved the trophy, it was Lazio, because they had got to the final without losing, without having to overcome any bad results.

“Ronaldo was sat there next to them and said, ‘Tomorrow, I’m going to make these two into figuras di merda’,” using an Italian phrase that roughly translates as ‘look a fool’.

“I went to him and asked, ‘Ronaldo, what are you doing?’ He looked at me and said, ‘They talk too much.’” 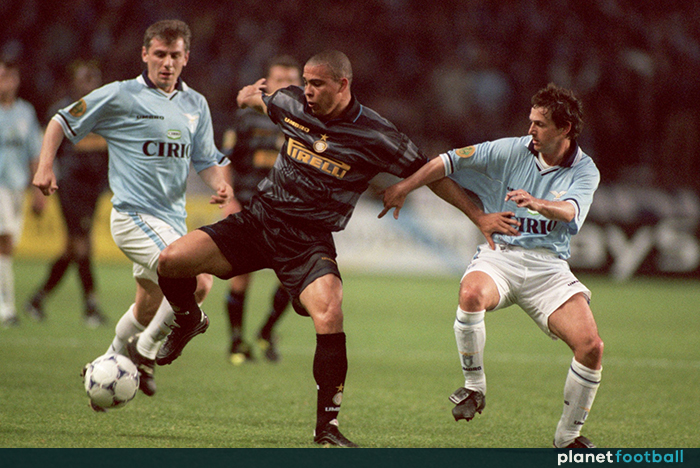 READ: Gigi Simoni: ‘Ronaldo was our leader and we treated him as he deserved’

With a knowing smile, Ze Elias glances up before continuing: “The next day we won the game 3-0. Ronaldo had a field day. He scored a goal, nutmegged someone.

“Mancini came up to him during the game and Ronaldo said, ‘Not now, keep quiet. If you want, I’ll give you my autograph after the game.'”

The other two goals were scored by Zanetti and Zamorano, cementing the importance of Inter’s South American connection.

The leadership of Simeone

On the subject of another one of that contingent, Diego Simeone, Ze Elias is emphatic. “We knew [he would become a manager]. You didn’t even need to play with him, living alongside him was enough.

“He watched football from six in the morning until midnight, slept from midnight until six, woke up and started watching football again.

“You went into a match and he already knew how the opposition were going to play. Five minutes after it started, he would change the way of playing. He’d say, ‘Ze, stay a bit more to the left or a bit more to the right, let’s swap positions.’”

Ze Elias, like many others, sees a lack of that sort of leadership in today’s game and puts it down to two things, firstly, the power of big-name managers to dish out instructions and, secondly, the financial situation young players find themselves in.

“Today there is a lot of money for young players, so they grow up without any difficulties. They are educated in a comfortable situation. With that comfort you don’t develop leadership skills. You don’t need to fight for anything if you already have it all.”

It is a comfort that he did not experience as a youngster coming through the ranks. Brought up at Corinthians from the age of just five, first playing futsal and then combining that with 11-a-side from the age of 12, he says: “We didn’t get any money for playing, we got some help with costs, but it was very little.

“If you went to the cafe on the corner and bought a sandwich and a drink, the money was already gone.

“So, when I was 15 I stopped playing futsal for Corinthians and moved to General Motors, which was the best futsal team in the country, so I would have enough money to pay for the bus, football kit and something to eat during the week.

“I lived in Guarulhos (a city to the north of Sao Paulo), so I left home at half-six, trained at Corinthians all day, went to Sao Caetano (another satellite town south of Sao Paulo), played futsal and then got home at one in the morning. Every day.”

At one point all that exertion became too much for the 16-year-old Ze. “A fortnight before I made my debut, I told my mum I was going to stop playing 11-a-side, so I could play futsal and go to university to study physiotherapy. She said, ‘No, keep going until the end of the year and then decide.’

“That week Corinthians lost the Paulista championship final to Palmeiras and the club went through a total reformulation. Because of that I was put into the Under-20 team for the first time. I played two games with the juniors and then on the Monday, the manager, Mario Sergio, called me to train with the professionals.

“In my first training session I set up a goal for Rivaldo, so they called me back the next day. And then on the Thursday Mario Sergio told me that I’d be playing against Cruzeiro on the Saturday. It was September 7, 1993. In the space of a fortnight I’d gone from nearly giving up football to being in the Corinthians first team.

“Ronaldo made his Cruzeiro debut that same day. I joke with him that wherever I went, he followed. We made our debuts in the same game, I got picked for the [1996] Olympic squad and then he came in, I went to Inter and then he went as well.”

Corinthians are in Ze Elias’ blood and were even before he arrived at the club. His mother, a fervent supporter, made sure of that.

But his is a family split along the lines of Sao Paulo’s biggest footballing rivalry: “My dad’s family are all Palmeiras fans, really fanatical ones.

“The first time I played against Palmeiras, my mum called my aunt and asked, ‘Rosie, who are you supporting today?’ My aunt said that she hoped I played well but that Palmeiras would win. My mum slammed the phone down and they didn’t speak to each other for a year.”

That, perhaps, gives you some indication of the intensity of the enmity between these two great clubs, a passion that Ze Elias says goes far beyond the more muted confrontations between Milan’s big two. 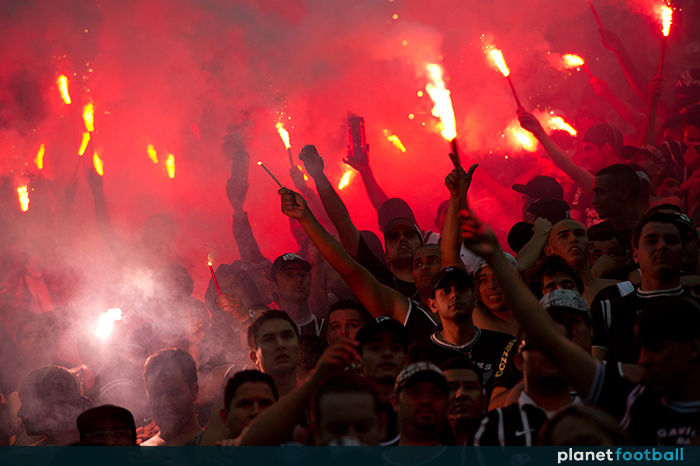 “I was used to arriving [for Sao Paulo Classicos] with a police escort, with fans throwing beer cans at the bus, throwing eggs, spitting at you. You had a mass of people all around trying to get you.

“So when I arrived in Milan there was all this hype. The Italian players couldn’t sleep the night before, they were scared. We arrived at the San Siro and it was just a normal game. I asked one of my team-mates, ‘Is this the derby?’ He said, ‘Yes, look at the tifos.’ But that was it.”

The only European rivalry he took part in that lived up to expectations was the so-called ‘Derby of the Eternal Enemies’ during his time with Olympiacos in Athens. He describes their games against Panathinaikos as “insane, really insane”.

“If you won you had to stay in the dressing room for four hours because the fans are outside waiting to kill you. I think even Corinthians versus Palmeiras loses out to that one.” 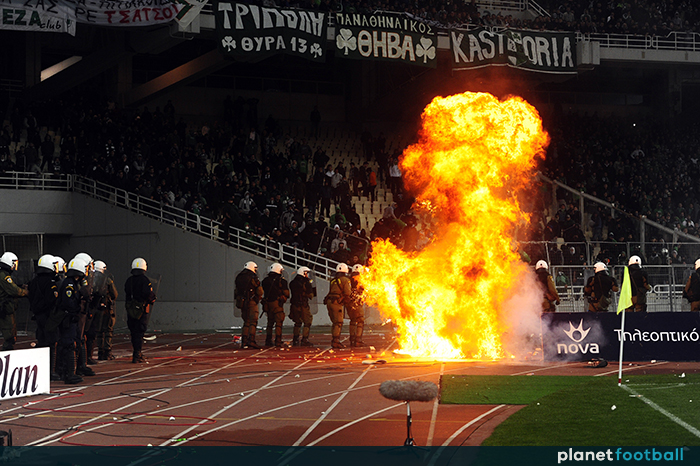 Now that he is retired from football, though, the guttural passion a supporter feels for their side has dissipated. “I stopped being a fan a long time ago,” he says with a slightly despondent look.

“When you start playing you realise that a professional footballer is like an orange. While he’s good and he has juice, everybody wants to peel him and eat him. When he’s done, people will just throw him away. It’s a business. Players are tools to be used for the benefit of others.”

That’s not to say that he has abandoned the game entirely. Ze now plies his trade as a pundit on Brazilian television and radio, applying a withering, Roy Keane-style brand of commentary to modern football.

Keane, he says, was a player he admired greatly and he leaves us with one last reminiscence: “When I go to Italy I’m still remembered for that UEFA Cup win. Well, that and one other thing.

“When we played Manchester United in the Champions League quarter-final in 1999,” the year United went on to lift the trophy, “I missed a great chance in the last minute. They’ll never forget that.”

By Joshua Law and Tom Sanderson

This article was originally published in December 2017

READ NEXT: A forensic analysis of Ronaldo’s iconic performance in the 1998 UEFA Cup final