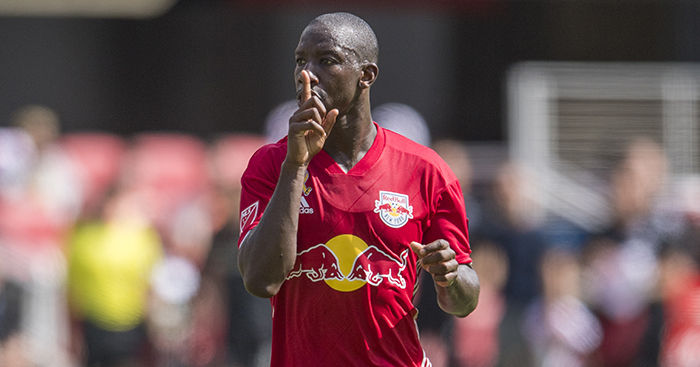 Zlatan Ibrahimovic has called himself a “Ferrari among Fiats” in MLS. Does that make Bradley Wright-Phillips a Bugatti Veyron?

Ahead of the latest ‘El Tráfico’ derby — a California rivalry between LA Galaxy and the newer Los Angeles FC — Zlatan was in talking mode again.

With former Arsenal youngster Carlos Vela in the form of his life for LAFC, Ibrahimovic was asked who was the current star of MLS: himself or the flying Mexican.

The Swede’s answer was typically dogmatic: “[Vela] is playing in MLS and he’s in his prime. When I was 29 where was I?”

One perfect hat-trick later, and Zlatan had more or less proved his point.

“I have a lot of respect for Vela, he’s a good player,” he said after Galaxy’s victory. “But you did one mistake: you compared him with me.”

These soundbites represent just a fraction of Ibrahimovic’s boasts since going Stateside. While playing for the Galaxy, he has called himself a “God” and a “Ferrari among Fiats”, later suggesting that a team of 11 Zlatans would be superior to any other.

He really does consider himself a cut above the rest.

And in some respects, he’s right: in his first season, the veteran was named in the MLS Best XI, while his debut wondergoal against LAFC was given the Goal of the Year Award. Even at 37, Ibra is able to swat aside the majority of American defences.

You have to wonder, however, whether he has done his research.

Look around MLS and there are indeed a lot of “Fiats”, as the striker calls them. But wander into the car park of the New York Red Bulls, focus your gaze on a certain British numberplate, and you’ll see a vehicle like no other.

From one Greenwich to another

Rewind to the summer of 2013, and Bradley Wright-Phillips — the uncelebrated younger brother of Shaun — had been released by Charlton Athletic, having scored one goal for the club in 19 Championship appearances.

At 28, time was ticking out for a striker then best known for having his transfer fee funded by Coca-Cola. Only in League One had he ever reached double figures.

It was therefore a surprise when Wright-Phillips was snapped up by the New York Red Bulls, an ambitious Eastern Conference side whose squad included Tim Cahill and, until very recently, legendary Brazilian midfielder Juninho.

“He’ll add another dimension to the roster with his pace and technical ability,” said an optimistic Andy Roxburgh, sporting director at RBNY.

As if to underline the bizarreness of the move, Wright-Phillips donned the #99 shirt.

What happened next was scarcely believable.

After bedding in during the tail-end of the 2013 season, Wright-Phillips began his first full campaign patiently, scoring once in six appearances.

But then, from nowhere, came a hat-trick against Houston Dynamo. More goals followed. And more. And more.

By the end of the 2014 season, the English expat topped the MLS scoring charts with 27 goals.

And it wasn’t just the numbers that were jaw-dropping; it was also the manner of the striker’s dominance.

Over the course of the campaign, Wright-Phillips formed a dynamic partnership with none other than Thierry Henry.

Yet it was Henry, scorer of 10 goals, who provided the foil for Wright-Phillips, rather than the other way round.

“[Henry] has stepped back a bit and let me play the ‘going-in-behind’ role and I appreciate [him] for that,” Wright-Phillips noted. “It takes a mature player and a great player to do that.”

Henry retired after the 2014 season, but Wright-Phillips barely suffered. Over the next four seasons, the striker scored 17, 24, 17 and 20 goals, winning another MLS Golden Boot and breaking several individual records along the way.

In July 2018 he scored his 100th MLS goal, becoming just the 11th player in the history of the league to do so — and doing it faster than anyone else.

And while Wright-Phillips currently sits eighth in the all-time MLS scorers list, his figures are the most striking among his peers.

He has comfortably the best goals-per-game ratio among the league’s all-time top 10 scorers. And within the top 25, his ratio of 0.68 is beaten only marginally by David Villa (0.71) and Robbie Keane (0.69).

Ibrahimovic’s two-season blitz for the Galaxy has seen him record a superior goalscoring rate of 0.91, but Wright-Phillips longevity and consistency is unprecedented in US football.

Moreover, there is a marked contrast between the attitudes of Wright-Phillips and Ibrahimovic.

After scoring his 100th goal — a superior feat to anything so far achieved by Ibrahimovic in LA — Wright-Phillips’ celebrations were admirably modest.

“You don’t score 100 league goals without great team-mates, past and present, top-class coaching staff and a supportive family,” he said. “I want to thank you all.”

Though Thierry Henry had been the Renault to his Bugatti, Wright-Phillips gave all the credit to his colleagues.

There’s a case to be made that Wright-Phillips, now 34, is the best player in the history of MLS.

It’s highly debatable, of course, but the Englishman’s unique goalscoring record will surely stand the test of time. He will always be mentioned in discussions on the matter.

But there’s also a case to be made — one that is argued less frequently — that ‘BWP’ has enjoyed the best career of any English footballer in recent years.

Not in terms of silverware or pure technical ability, but in terms of maximising his potential, of enjoying an extended run of personal success far beyond the expectations of observers.

On those terms, who can possibly match him? The Europe-conquering James Milner, perhaps? Jamie Vardy?

Even in his thirties, Wright-Phillips was the standout striker in his division, adapting to a new environment with ease, generating an understanding with some of the finest players in the game, and rescuing a career that appeared to be heading downward.

Six years on from his transfer to RBNY, it does appear that Wright-Phillips’ hot streak might be over. Injuries have kept him out of several matches this season, and he has found himself on the bench since his return.

Nonetheless, a game-saving, 93rd-minute strike earlier this month reminded everyone that BWP still has a lethal finish in him.