Celebrating Corinthian bigheads and possibly the 20 best figurines ever 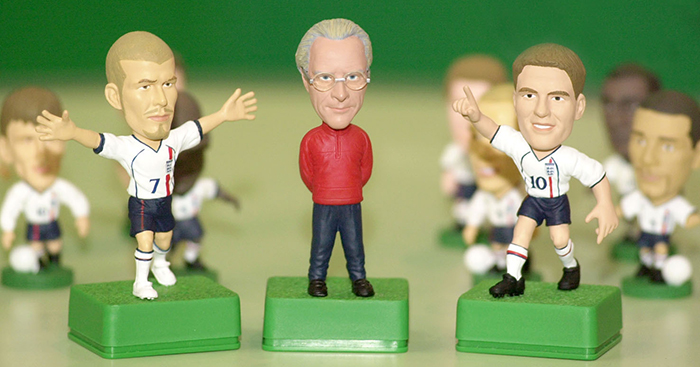 Corinthian bigheads, we can all agree, are among the greatest inventions since the wheel. But the big question remains: what are the best figurines of all time?

But that instruction to “play football” wasn’t totally sincere.

Rather, Powerpodz creator Corinthian, having invested £2million into that 2001 advertising campaign, wanted you to play its new football-themed board game, which required you to assemble a squad of ‘MicroStars’ football figurines.

These MicroStars, which featured likenesses of a huge number of professional footballers, were a smaller-scale spinoff of ‘Headliners’ and ‘ProStars’, Corinthian’s hugely-successful bighead football statuettes produced between 1995 and 2008.

Whether you collected them or not, you were never far from a Corinthian figurine around the turn of the millennium.

You’d see them at school, on your friends’ shelves, and even in more unlikely places: a Villa-supporting friend of mine had Juan Pablo Ángel blue-tacked to the dashboard of his car.

For reasons that might seem hard to comprehend, these figurines were genuinely adored — and not just among the nerdier bracket of football fans. If stickers or medals didn’t do it for you, Corinthian bigheads probably did. 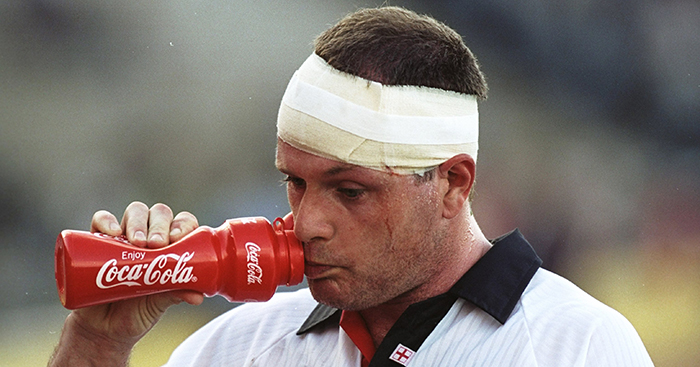 But while that memorable Powerpodz advert hit the target in a certain sense (we’re all still singing it, despite those Kinder-style chocolate pods being a pretty minor moment in Corinthian history), it also misfired in a big way.

Because although we certainly could play football with the lads — in 2001 that meant Gus Poyet, Jaap Stam, and Michael Owen — perhaps the most remarkable feature of Corinthian bigheads was their intrinsic unplayability.

They looked like toys, you could buy them in the toy shop, and their circular plinths had a vague hint of Subbuteo about them, but these were ‘toys’ in formal terms only.

Corinthian figurines were inanimate artefacts meant for collecting, obsessing over, lining up in strange formations and chronologically impossible teams, swapping, stealing, defacing, vilifying, and sometimes just laughing at. The one thing Corinthian never, ever needed was a game with rules. 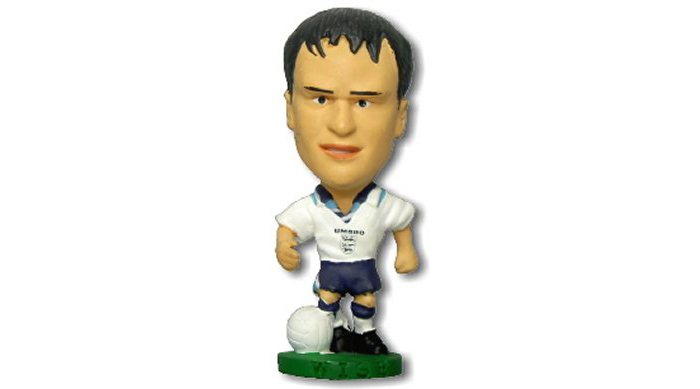 Ah, to be a Chelsea fan in 1996, with John Spencer leading the line, Ruud Gullit doing beautiful things, and Dennis Wise’s hair dripping down his forehead like warm chocolate sauce. Wise was joined on the second England Headliners series by Barry Venison and John Salako, among others. 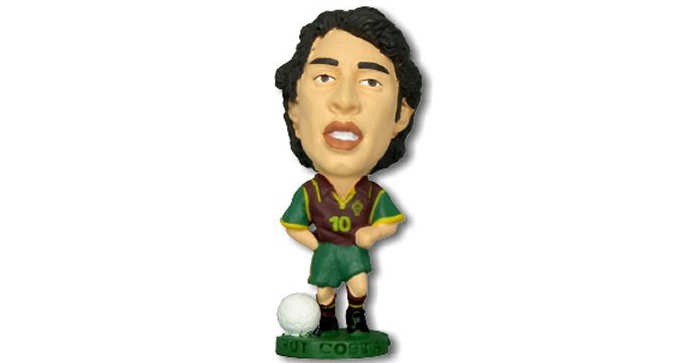 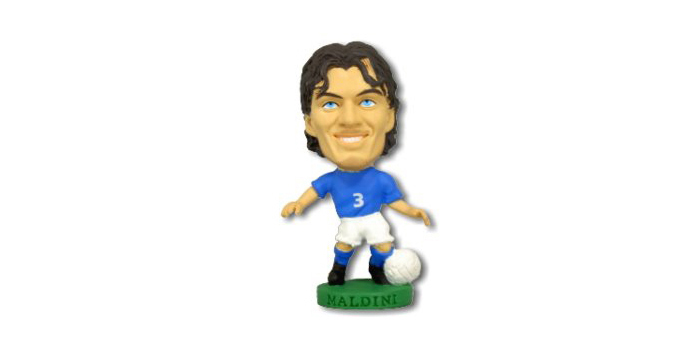 2002 was a bittersweet year for 34-year-old Paolo Maldini: retiring from international football after captaining Italy to a controversial World Cup exit would have stung, but being considered a Corinthian “World Star” was a fine antidote. 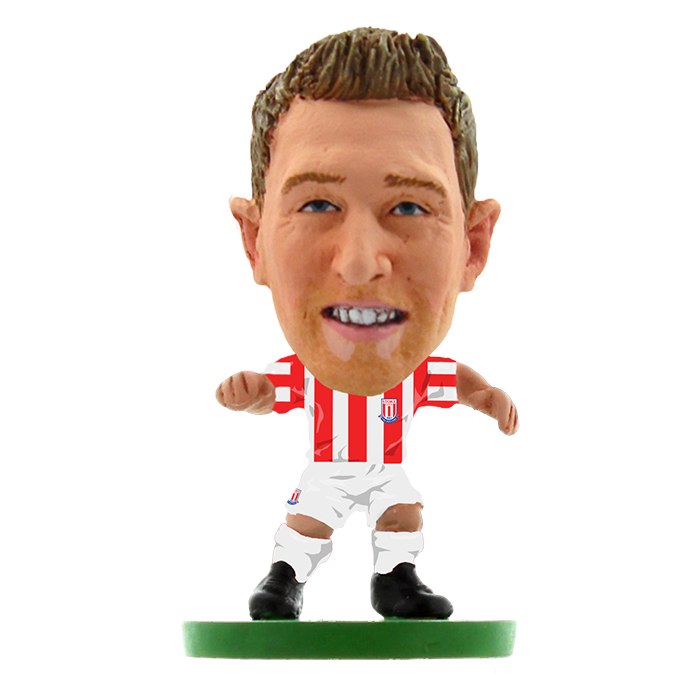 Curveball! If Sergio Ramos had been born in Dalkeith, he might look a bit like this eerily up-to-date SoccerStarz figurine. Actually, ‘up to date’ is misleading – Fletcher’s head has not been updated for several years; only the kit has changed. 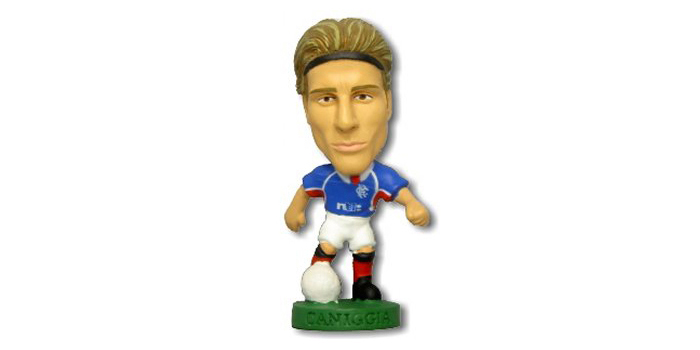 In real life, Rangers-era Claudio Caniggia looked a thinning Andriy Voronin. So by depicting him as the handsomest man on Earth, Corinthian did him a bit of a favour. (Sadly, there is no Benjamin Massing figurine.) 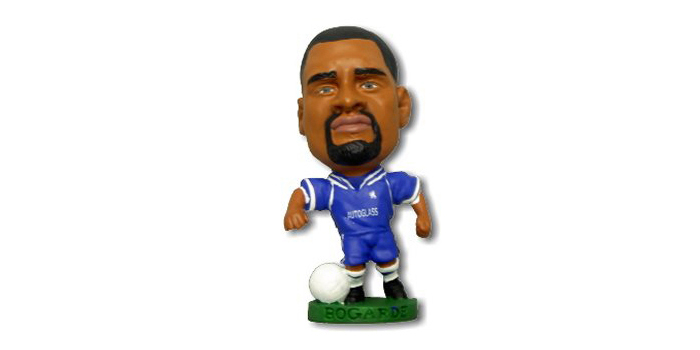 Ah, to be a Chelsea substitute in 2001. The pose of this Winston Bogarde figurine accurately suggests a man happy to collect his £40,000-a-week wages for nothing. 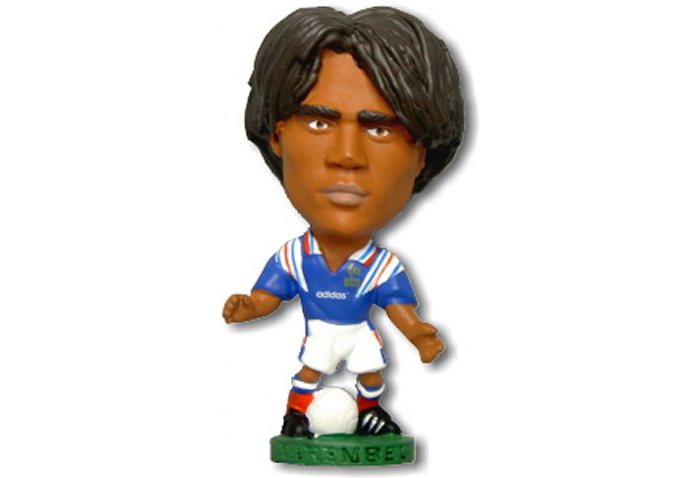 The Madrid-to-Middlesbrough road would later be taken by Geremi, but Christian Karembeu’s arrival probably brought more excitement to Teesside. This top-heavy figurine of Karembeu in his France pomp is notorious amongst collectors for not being able to stand on its own. 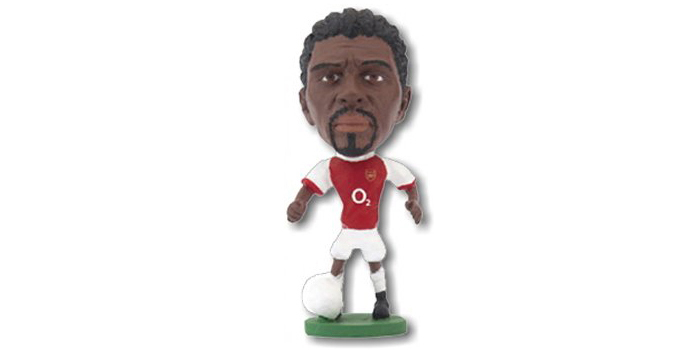 Corinthian made clear its position on those age rumours. 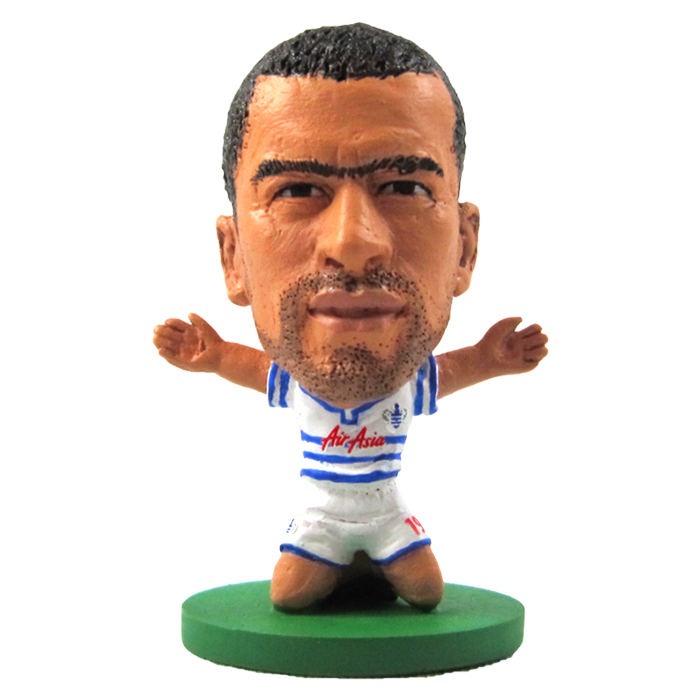 Spot the mistake! I’ve done the research, and José Bosingwa did not slide on his knees after scoring his one and only goal for QPR — the final strike in a 3-0 League Cup win over Walsall in 2012. 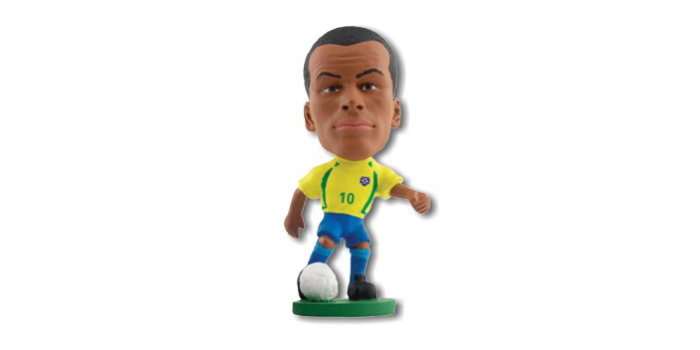 Rivaldo gets the nod over Ronaldo for personal reasons. In 1999, Corinthian included Ronaldo in its first ProStars series, making the striker available to redeem with coupons and a pound. Maybe I misread the instructions, but my Ronaldo never arrived. 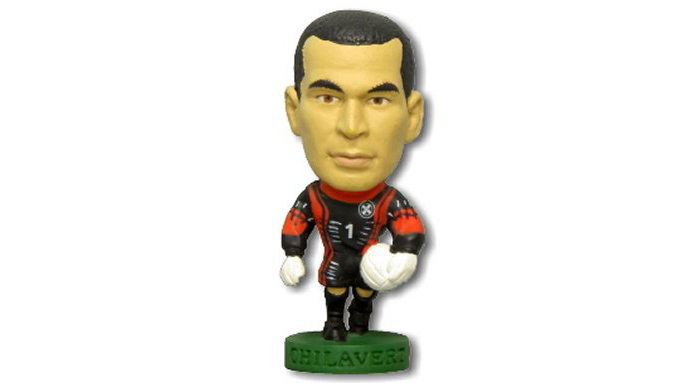 One should seize any opportunity to remember the career of Paraguayan hero José Luis Chilavert, the only goalkeeper ever to score a hat-trick. 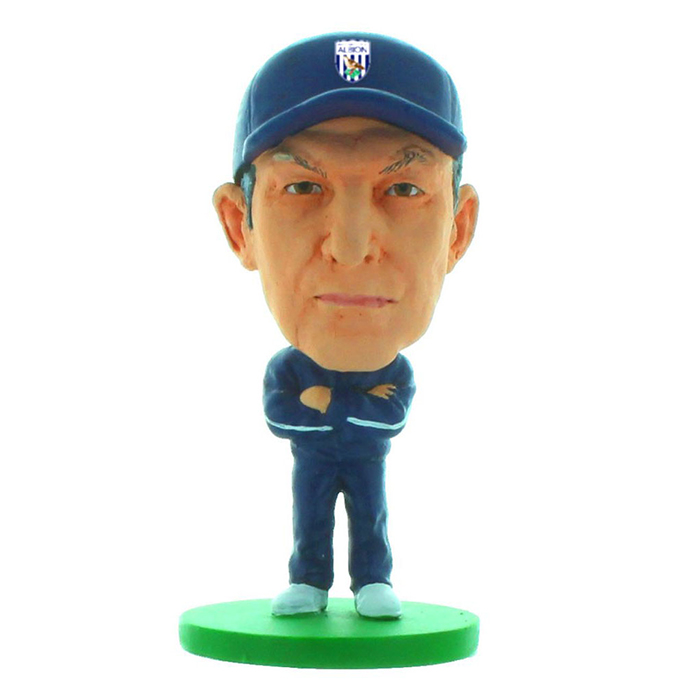 The non-Corinthian SoccerStarz might lack the handworked charm of the older statuettes, but this Tony Pulis figurine just makes you want to dry a ball with a towel and launch it in the general direction of Mamady Sidibé. 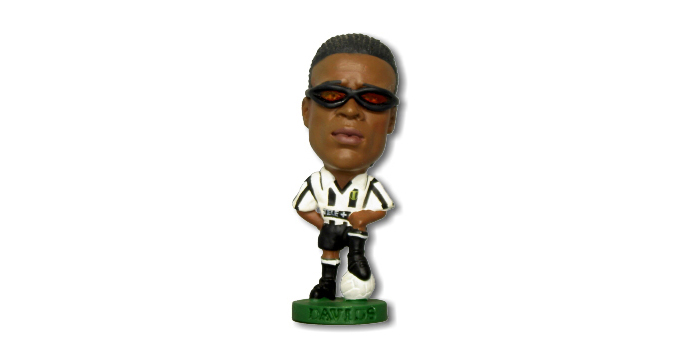 A less successful manager than Tony Pulis, former Barnet legend Edgar Davids remains one of the most valuable Corinthian figurines out there. This rare Juventus model with orange glasses was part of a Serie A four-pack containing Paulo Sousa, Paolo Maldini and Juan Sebastián Verón. 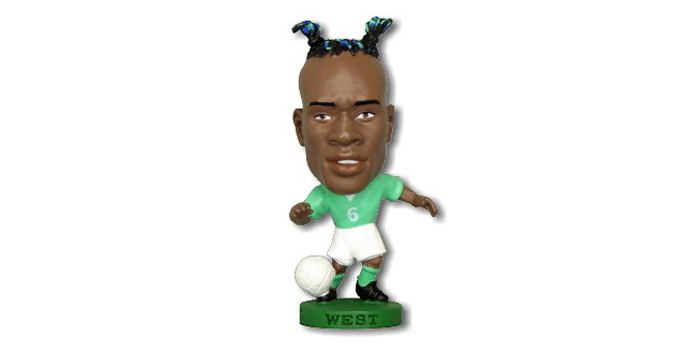 If Edgar Davids isn’t your favourite Serie A legend to go astray in the English lower leagues, then Taribo West surely is. The Nigerian won a gold medal at the 1996 Olympic Games, and later played for Derby County and Plymouth Argyle. 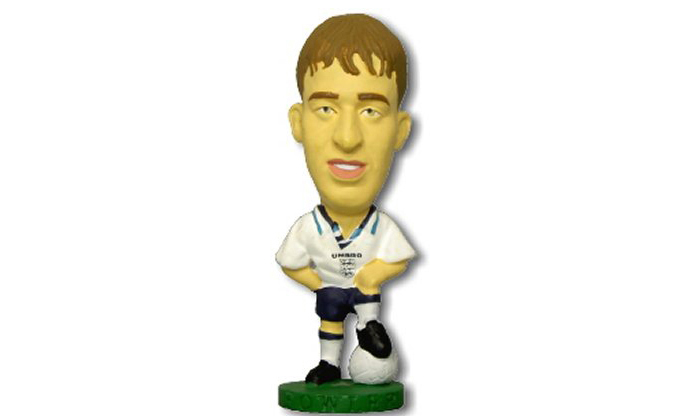 Corinthian would go on to make technically superior Robbie Fowler figurines — nasal strip and all — but there’s something quite sweet about this deathly jaundiced image of ‘God’. A similar skin tone was later given to Paul Scholes. 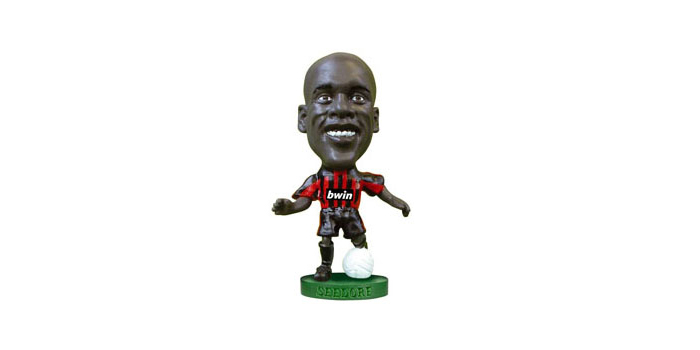 In 2008, Corinthian wrapped up the ProStars range for good. Dutch magician Clarence Seedorf, a player well worthy of any footballing honour, was the last regular-series figurine to be released. 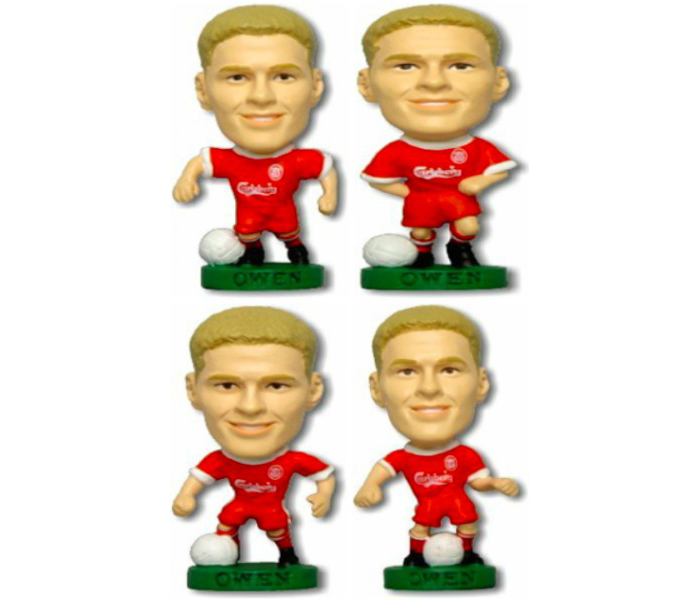 Hold on there, mate. Is that four different Michael Owen figurines, making four very slightly different poses? There were five different pictures for Walkers’ Cheese & Owen crisps, but this takes the p**s.

Context: most of these ProStar figurines were packaged in two different ways. While you could buy the individual ones you wanted in presentation-worthy blister packs, these tended to feature the player in his club’s away kit, and were more expensive. To get the home kit, you had to find the player in a mystery “secret sachet” pack, where you could be getting any player in the current series.

Unless you wanted Michael bloody Owen. Not only were there four Michael Owen figurines in this 1999 series (which gave you pretty good odds within the range of 19), Corinthian even put “Michael Owen inside this pack” stickers on the appropriate sachets.

Frankly, if you’re an eight-year-old Liverpool fan and you aren’t content with a mean-looking Oliver Bierhoff for your pocket money, you don’t deserve football. 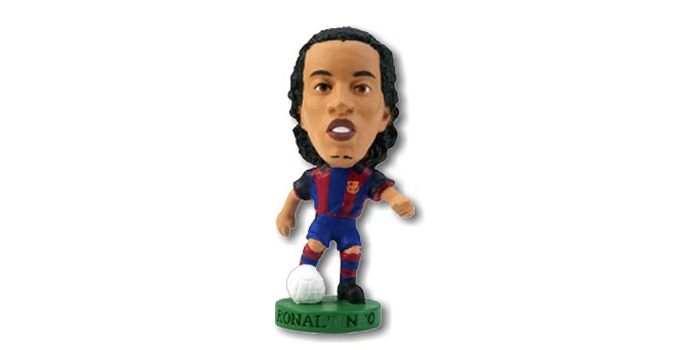 Okay, getting a little weird now. Without the smile, it’s not really Ronaldinho, is it? Still, perhaps this figure being ruined by over-exuberant artistic choices is a good metaphor for the Brazilian’s candle-at-both-ends career. 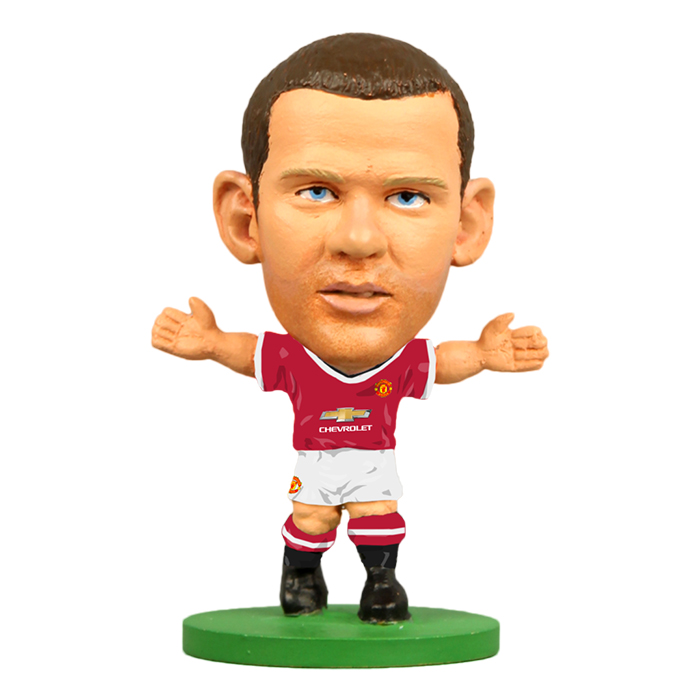 Nah, c’mon. Is this an image rights thing? All I’m seeing is the corrupt insurance salesman from Twin Peaks. But then again, what’s a novelty football bighead for if not to make you smile? 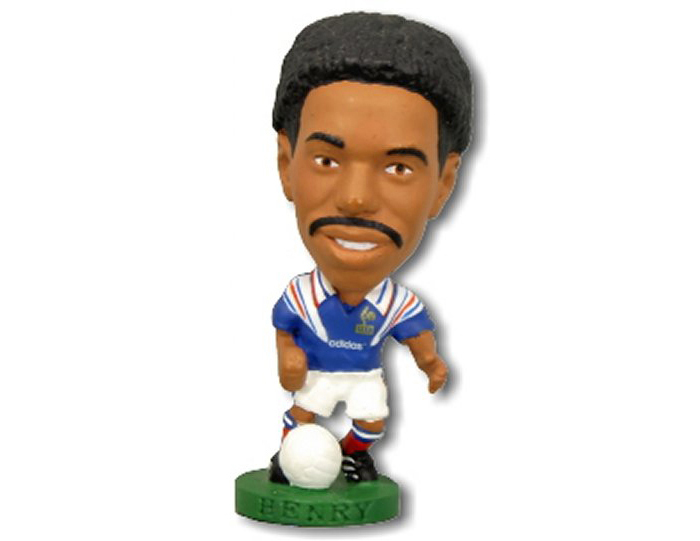 And then there’s this.

Many thanks to Craig Robinson, creator of the excellent SoccerStarz Archive and Corinthian Archive websites, for providing images and suggestions.