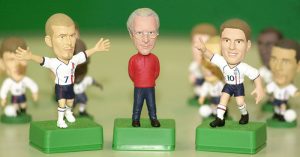 Models of England Captain David Beckham and Manager Sven Goran Eriksson, as part of Vivid Imaginations’ Corinthian football figures range, are displayed at the Toy and Hobbies Fair, at the ExCel exhibition centre in Docklands, east London. * The 1990’s collectable footy craze, Corinthian Figures, is being relaunched for 2002 with new World Cup and Premiership line-ups. The trade fair is a showcase for manufacturers to reveal what they hope will be best-sellers.