Kolo Toure played for Arsenal, Manchester City, Liverpool and Celtic during his career yet you almost certainly like him. Or at least don’t hate him. That’s a pretty impressive achievement.

The idea of a universally-liked footballer seems far-fetched in these days of hyper-partisanship, but a handful do exist.

Juan Mata and Peter Crouch instantly spring to mind as players you’d have to be a special kind of bastard to hate – and a quick straw poll of friends suggests Kolo Abib Toure falls into that same category.

This, after all, is a man who claimed to have had a dog for seven years that he has never even touched. A man that inadvertently revealed a love for Whitney Houston when asked to name the favourite terrace song about him – which he then went on to sing, complete with the actions. You know the one.

This is a man that Liverpool fans loved even after he made a mistake, just because of the way he reacted. A man that gave away a truly ridiculous penalty in extra time of a League Cup tie against Middlesbrough yet somehow left fans with a positive memory of his contribution that night after rifling home the most emphatic of penalties in the shootout.

Even when he was being bad, he was being brilliant: there have been few handballs as comical as the one he produced to deny Wayne Rooney a certain goal in a game at Manchester United in 2006.

Still the GOAT handball in PL history, that was never given. Kolo Toure vs. Rooney! pic.twitter.com/AoU75cM1q9

Frankly, anyone that has inspired as many memes as Toure is clearly worthy of some sort of celebration. Disliking him might just be an insult to the concept of life itself.

The outpouring of support for Toure on social media when he announced his retirement to join Brendan Rodgers’ technical staff at Celtic was evidence of just how affable the Ivorian is, but it shouldn’t be forgotten that, at his peak, Toure was also one of the best defenders in the Premier League, a constant fixture in Arsenal’s record-setting 2003-04 Invincible season.

He joined the Gunners in February 2002 after a short trial, and of course there is a brilliant story – this is Toure, after all – about that trial, as told by Ray Parlour.

You simply have to listen to it in full to appreciate it, but to cut a long story short if you can’t listen right now, so eager was Toure to impress that he smashed into Thierry Henry, Dennis Bergkamp and, hilariously, Arsene Wenger in his first training session.

Rather than put Wenger off, such enthusiasm actually convinced the Arsenal boss to take a change, but the Frenchman was understandably at pains to point out his new acquisition wouldn’t be ready to compete at the highest level for at least three to four months.

In the end Toure made his Arsenal debut early the next season in August, seven months after his £150,000 arrival from ASEC Mimosas.

This was an era before transfer fees had completely skyrocketed to the current levels, but considering the success he went on to have with the Gunners, Toure will surely go down as one of the Premier League’s best bargain buys, a low-risk gamble that blossomed into a high-calibre defender.

Initially, Wenger saw Toure as a versatile player capable of putting in a shift at right-back, centre back and in defensive midfield, the kind of player hampered by his own range of skills but nonetheless a valuable tool to be kept in the squad.

Toure made 26 league appearances in his debut season, rarely setting the world alight or grabbing the headlines, although he did score an equaliser in a 1-1 draw at Stamford Bridge and was sent off against PSV Eindhoven in the Champions League after two yellow cards in six minutes in an uneasy performance at left-back.

Arsenal failed to defend their league title that season, while Toure was an unused substitute in their FA Cup triumph over Southampton, but in 2003-04 he was central to Wenger’s crowning moment of glory as the Gunners famously won the Premier League without losing a game.

Tony Adams’ retirement at the start of the previous season combined with Martin Keown’s advancing years had left Wenger searching for a regular partner for Sol Campbell – and not for the first or the last time he looked to his existing squad to provide the solution.

Pascal Cygan was the other option, but Wenger plumped for Toure and was certainly not left to regret the decision as Arsenal cantered to the title, conceding only 26 goals along the way. 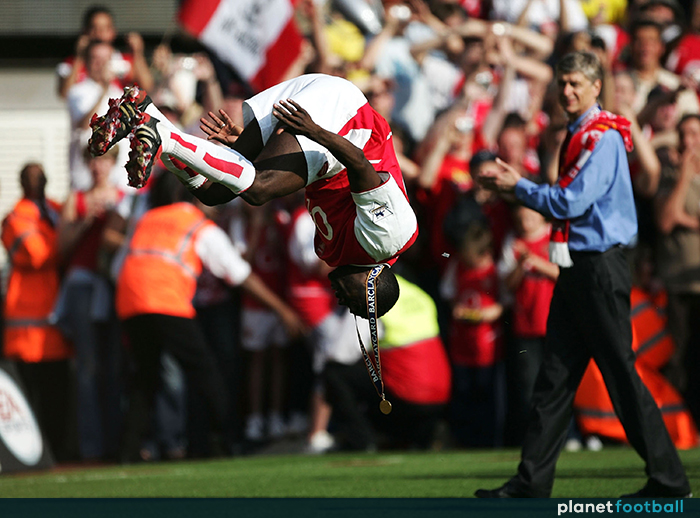 Toure was gifted with pace, a defender not scared to get in the way of shots, and with his career origins as a midfielder, he was assured on the ball, passing out from the back with ease and perfect for the style of play Arsenal perfected that season.

Toure played 37 times that season, scoring twice, and became an increasingly central figure within the Arsenal squad over time, playing a crucial role in the defence that kept 10 consecutive clean sheets in the 2005-06 season en route to a Champions League final they would go on to lose to Barcelona in Paris.

He formed another formidable partnership with William Gallas, particularly in the 2007-08 season that saw Arsenal compete for the title before four consecutive draws in spring caused them to stumble across the finish line, but a £14million move to Manchester City in 2009 marked the end for Toure at Arsenal, seven years after he first arrived on the scene, clumsily smashing into team-mates and manager alike.

Toure arrived raw and untested; he departed an established and savvy defender.

He won the Premier League in his first year at City and stayed for a further three seasons at the Etihad before a three-season spell with Liverpool and then one final hurrah at Celtic during which time he added three more trophies to his cabinet.

His ability as a footballer had undoubtedly waned by the time he eventually hung up his boots, but his ability to entertain and bring smiles to faces certainly never did.