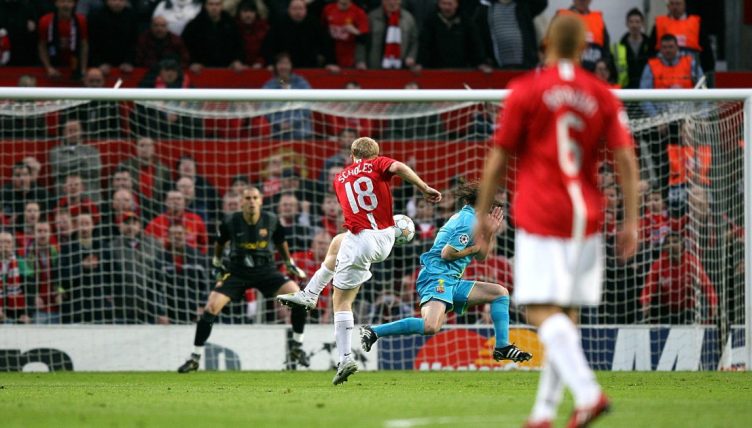 Fourteen years have passed since Paul Scholes scored an Earth-shattering long-range goal for Manchester United against Barcelona. For reasons of context and timing, it should be remembered as his greatest ever.

Manchester United captain Roy Keane has left the club after ruthlessly criticising his team-mates in a never-broadcast interview.

United’s most talented player in that position, Paul Scholes, is ruled out for the season in late January with a diagnosis of double vision. He is, at this point, 31 years old.

It’s hard to pin down an exact moment, but somewhere around this time, somewhere around getting into his 30s, missing games and seeing — albeit blurrily — John O’Shea taking his central midfield berth, Paul Scholes stops being a goalscoring midfielder.

There seem to be a few reasons why this happens: declining pace, the loss of reliable defensive cover provided by Keane, changing tactics. Whatever the causes, these changes produce a slow transformation.

Scholes the box-to-box midfielder is, with his feet up for the remainder of the season, becoming Scholes the deep-lying playmaker.

With his vision restored, 2006-07 marks something of an encore for goalscoring Scholes. Although a return of seven goals in 45 appearances is modest, one of those happens to be a thunderous volley from 25 yards, the second in a 3-0 win at Aston Villa.

For some fans, that memorable strike remains the midfielder’s greatest goal. And by some metrics, it probably is: the technique is flawless, the beauty unparalleled, the unintentional Gavin McCann assist commendable.

It goes in off the crossbar, for goodness’ sake!

ON THIS DAY, In 2006: Paul Scholes scored this amazing volley vs Aston Villa 🚀 #MUFC pic.twitter.com/iLzLwLoON7

But for all those goal connoisseurs who value the intrinsic qualities of a strike, there are those that call for a more all-encompassing definition of a ‘great goal’ — one that includes context.

The second strike out of three in a pre-Christmas league match? For all of that volley’s qualities, its relative meaninglessness counts against it.

The 2006-07 season finishes with United winning the league and losing the FA Cup final to Chelsea, an extra-time Didier Drogba strike proving the difference. Match of the Day’s ‘Goal of the Season’ award goes to Scholes’ team-mate Wayne Rooney.

Although he will not retire permanently for another six years, Scholes will never score five league goals in a season again.

2007-08 is an exciting season for United. Owen Hargreaves arrives from Bayern Munich, Carlos Tevez arrives from some organisation or other and future world-beaters Nani and Anderson arrive from Sporting CP and Porto.

It’s an exciting season for Scholes too, albeit a strange one.

On August 15, in United’s second league match of the season, the ‘Ginger Ninja’ scores in a 1-1 draw at Portsmouth. It’s a brilliant finish, but he won’t add to that single Premier League goal all season.

We have approached peak deep-lying playmaker Scholes. With Cristiano Ronaldo performing no defensive duties on the wing, the brief for Scholes, Hargreaves and Michael Carrick is to sit deep.

Even with the newfound space to hit long-range attempts, however, the shots are fewer and further between.

It’s as though Scholes knows he won’t top the Villa strike and is happy to see out his remaining years spraying 50-yard diagonals from his own half.

Passes are good, of course, but have you tried singing ’50-yard diagonals’ to the tune of ‘Kumbaya’? Don’t.

April 29, 2008. After defeating Roma in the quarter-finals of the Champions League, United have taken a 0-0 away result into the second leg of their semi-final against Barcelona.

This Barcelona side will thwart United multiple times over the next few seasons, but not tonight.

The 14th minute. In a desperate attempt to keep Ronaldo at bay, Barcelona right-back Gianluca Zambrotta prods a left-footed clearance into the middle of Barcelona’s half.

The ball arrives at the feet of Scholes. Deep-lying playmaker Scholes. Scholes who has not found the net since August 15. Scholes who now has Gabriel Milito, Carles Puyol and Victor Valdes ahead of him, not Martin Cranie, Sylvain Distin and David James.

In a sense, playmaker Scholes lets himself down. The sensible option, by anyone’s standards, is to pass to Nani, who is wide open on the right.

Nani ignored, Scholes — some Windows 98 backup version of Paul Scholes, all up-to-date files wiped clean from his memory — tees the ball up with a slight bounce, cuts across it, and hits a perfect strike into the far corner.

#OnThisDay in 2008, Paul Scholes scored arguably the greatest and most important goal of his Manchester United career in the Champions League semi-final against Barcelona🚀

And for a few seconds more, we see that childlike former version of Scholes running away in ecstasy, mouth agape, hands outstretched, ducking and weaving to avoid his celebrating team-mates.

Then as quickly as it arrived, it is gone. The deep-lying playmaker returns. The wild grin is replaced with a serious pout. There are 76 minutes left to play.

Should have passed to Nani.

It isn’t controversial to argue for the Barcelona strike being Scholes’ finest.

There’s also the Villa goal, the Panathinaikos one, the volley from a corner against Bradford, but many agree that the Champions League wonder strike — the foundation of United’s eventual lifting of the trophy — ranks highest.

That’s partly due to context, of course. The context of the match itself, a Champions League semi-final against one of the finest teams of the era, and it being the winning goal, the only goal scored over two legs. 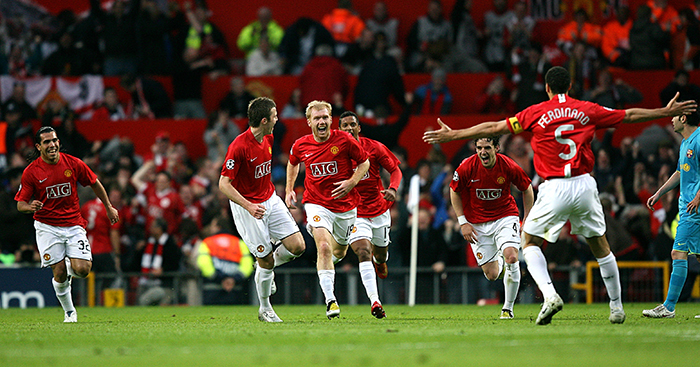 But the context of Scholes’ own transformation should factor into the decision too.

This wasn’t a goal scored by the attacking Scholes of previous seasons; it was scored by a player who had redesigned his game to be less reliant on goals, who had intentionally taken a step back from opposition penalty areas for the benefit of the team.

For that reason, for the goal should be celebrated relentlessly: for its sheer improbability, for its status as a total anachronism in the career of Paul Scholes.