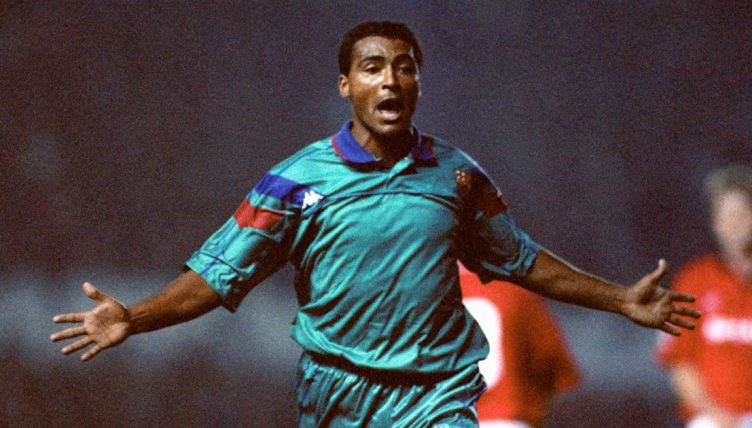 Sid Lambert goes back to the Nou Camp in the 90s. Before Messi, before Ronaldinho, there was Romario. And he was absolutely mint.

Take a look at Romario in his prime and you wouldn’t necessarily believe him a footballer. 5ft 6in tall, thighs like slabs of ham and an arse wider than your television. He looked like the unholy offspring of a drunken tryst between Roberto Carlos and Willie Carson.

Appearances can be deceiving. Just ask Mr Benn. That same backside was Romario’s secret weapon, the key to a low centre of gravity that allowed him to produce more twists and turns than a Coleen Rooney mystery novel. Those thighs generated raw speed in short bursts, and allied to those physical gifts was a supreme self-confidence in front of goal.

Baixinho (Shorty) first came to prominence in Europe during a goal-laden spell with PSV Eindhoven, which saw him top the scoring charts for three successive seasons. When Barcelona came calling in the summer of 1993 it seemed like a natural fit. He’d outgrown Holland.

A former team-mate famously claimed that “Romario was only interested in two things: football and fucking”. He’d kept himself entertained by importing a beachload of sand and hosting all-night house parties at his palatial home.

But after five years of dazzling Eredivisie defences and Eindhoven’s most eligible females, he needed something new.

Making your home debut against Real Sociedad in front of a feverish 100,000-strong Nou Camp might understandably be an intimidating prospect. Romario, however, looked cooler than Arthur Fonzarelli in an ice bath. Any concerns that his talents might not translate to La Liga were dispelled after 90 minutes of wizardry and one of the greatest hat-tricks of all time.

The first goal was trademark Romario: darting between two defenders and a rifle into the bottom corner. The second was a masterclass in touch and movement, an exquisite toe poke after an impossible one-two with young Pep Guardiola.

The third. Good grief, the third. This time it was Michael Laudrup the provider with a deft chip over a defence left for dead. And this time Romario abandoned all levels of common decency in forward play. Rather than bring the ball down, he lob-volleyed the advancing keeper. It was a fantastic, unfathomable finish. And filthier than a miner’s shovel.

This weekend marks the anniversary of The Greatest Forgotten Hat-Trick Of All Time.

Romario vs Real Sociedad in 1993. This is absolute, wall-to-wall filth.

The Clasico and the Carnival

As the season progressed, Romario settled into his new surroundings and a steady relationship with Catalunya’s notorious nightlife.

Rather than move into a family home with his wife, he insisted on a penthouse apartment in the city centre, never knowingly more than a stone’s throw from the next all-nighter. He slept by day and did damage under the cover of darkness – like Bruce Wayne on Viagra.

His lifestyle started to cause tensions at home and work. Off the pitch, Romario was uncontrollable, much to the chagrin of his missus. On the pitch, Johan Cruyff was experiencing familiar frustrations to the star striker’s former managers.

A classic example came on the eve of the 1994 Clasico, the most seismic fixture in Spanish football. A match steeped in history and hatred. The Spanish press salivated at a clash between Cruyff’s so-called ‘Dream Team’ and their most bitter rivals.

Whilst his team-mates prepared for this titanic battle, Romario had his own clash to deal with. It was carnival season in Rio and he needed time off to recharge his batteries, preferably surrounded by beaches and bikinis.

He negotiated with his manager an extended break, on the proviso that he scored two goals in El Clasico. The little genius nabbed three, including the most exquisite Seeya Later in the history of Seeya Laters to open the scoring, before catching a flight back to his homeland.

Today is the 25th anniversary of Romario performing the greatest Seeya Later in the history of Seeya Laters. In the Clasico too.

He finished the season with 30 goals in 33 league games as the Catalans pipped Deportivo to the title. It could have been the catalyst for years of dominance, but within months the dream had died.

United we stand, divided we fall

In an age where glimpses of overseas football were few and far between, the closest English fans got to a glimpse of La Liga was playing Sensible Soccer. They got their first proper look at Romario during the 1994-95 Champions League campaign. Premier League champions Manchester United travelled to Barcelona – and immediately wished they hadn’t bothered.

This was a mauling. Albeit one with an asterisk attached. Alex Ferguson’s choices were limited by the absurdity of UEFA’s rules on “foreign” players, which meant that the majority of United’s Welsh and Scottish contingent, alongside the panache of Cantona, Schmeichel and Kanchelskis, were persona non-grata on European duty.

It left the Old Trafford boss with impossible choices. And he got most of them wrong. Young Gary Walsh was in goal – and duly had a stinker.

In fairness, the omens were there. In training the night before he’d conceded a goal to Mick Hucknall, who’d stopped by to wish the team well and joined in the shooting practice.

Nonetheless, the young keeper wasn’t helped much by those in front of him. Whilst United were depleted elsewhere, they still had Bruce and Pallister at centre half – the bedrock of their Premier League dominance.

Romario made them look like two drunks arguing at a bus stop. The best central defensive pairing in England was torn to shreds, reduced to finger-pointing and shrugs of disbelief.

Flashback Friday: When Cruyff's Barca, led by Romario and Stoichkov, destroyed Manchester United in 1994 at the Nou Camp. pic.twitter.com/iqhrTup8if

It was his last big moment in a Barca shirt. He and Cruyff were barely on speaking terms and he’d started the domestic season sluggishly. Weeks later he made the front pages after being caught with his plums out in a hotel with a mystery lady. Mrs Romario was displeased. The unhappy couple were displaced. It was time to go home.

It was the start of a nomadic career that saw Baixinho make 11 moves in the next 15 seasons and finish with an alleged record of over 1,000 professional goals. This was later downgraded to 929 by FIFA, who discovered that Romario had double-counted goals during games of Headers and Volleys in school in order to reach the milestone.

Highly questionable statistics, toxic relationships with team-mates and extra-marital exploits, his next career move came as no surprise. He became a politician.