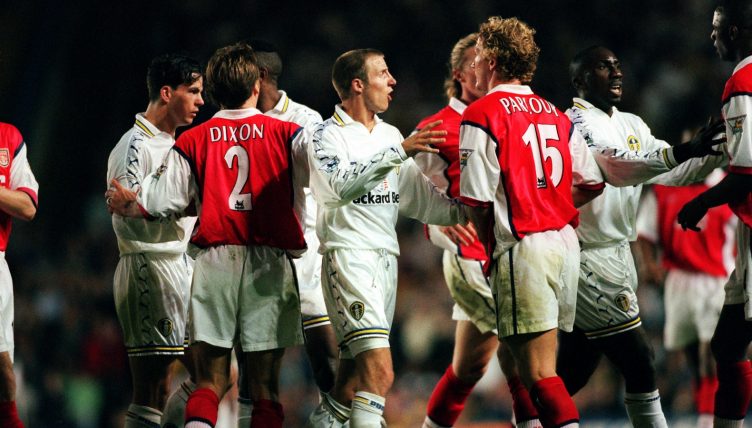 After two games into the 2001-02 season, FA chief executive Adam Crozier had already had enough of Arsenal and Leeds United.

Crozier had just witnessed Leeds win 2-1 at Highbury in yet another heated clash between the two sides. Four visiting players were booked within the first 17 minutes and Lee Bowyer and Danny Mills were both later sent off. Mills’ second yellow came after playing a one-two off the back of Ashley Cole while the left-back lay injured on the floor.

“The Arsenal-Leeds game has developed an edge that isn’t entirely desirable,” Crozier said while urging David Dein and Peter Ridsdale to meet for peace talks. “It is something the two clubs have to do a little bit of work on – it is not healthy to have that kind of rivalry going on.”

That game had been the third consecutive fixture between the two teams to be followed by an investigation from the FA. Their previous seven encounters had involved four red cards and over 50 yellows.

A history of violence

To neutrals, Arsenal vs Leeds may not be the most obvious rivalry, but there is plenty of history between the two clubs. Under the management of Don Revie, Leeds beat the Gunners in the finals of the 1968 League Cup and 1972 FA Cup but were pipped to the Division One title by the north Londoners with only a single point separating the two teams in 1971.

In Fever Pitch, Nick Hornby wrote of Arsenal’s 1-0 defeat in the FA Cup final: “The game itself was as dismal as all the other Arsenal-Leeds games had been: the two teams had developed something of a History, and their meetings were usually violent and low-scoring. My friend Bob McNab was booked in the first two minutes, and from that moment there was a procession of free-kicks and squabbles, ankle taps and pointing fingers, and snarls.”

The rivalry had somewhat dissipated as Leeds struggled in the post-Revie years. Before ultimately succumbing to relegation in 1982, the Yorkshire outfit’s fall from grace was emphasised by losing 7-0 and 5-0 to the club with whom they had previously fought for honours.

Seven years passed without a meeting between the old foes. But if absence makes the heart grow fonder, they soon became sick of the sight of one another after Leeds were revived by Howard Wilkinson; an FA Cup tie which required three replays ensured they met seven times in 12 months following Leeds’ return to the top flight in 1990.

Tensions began to simmer when the Whites appointed George Graham as manager a year on from his acrimonious exit from Arsenal, but things only truly boiled over once Graham had been replaced by another former favourite Gunners hero, David O’Leary.

Two months after O’Leary took charge in October 1998, Leeds were beaten 3-1 at Highbury, but the tone was set for the next five years of vitriol when Gilles Grimandi was sent off late on for aiming a headbutt at Alan Smith just 15 minutes after coming off the bench. 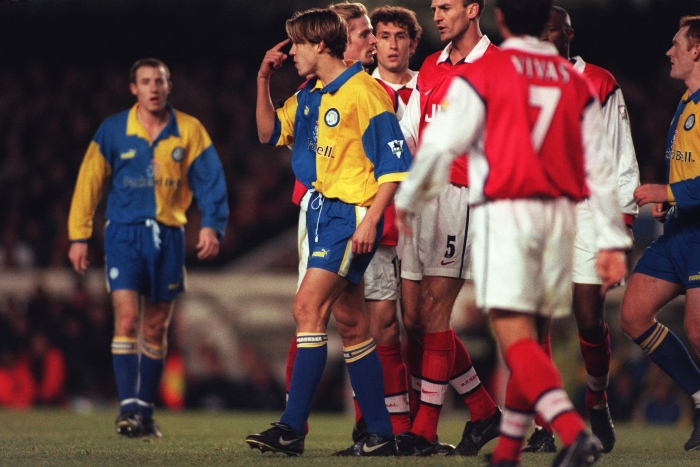 Smith, who had recently turned 18 and was making just his sixth senior appearance, had only been on the pitch for five minutes himself, but his choir-boy appearance belied a vicious streak which regularly got under the skin of opponents.

In later years, Barcelona’s Frank de Boer was left upset by the “mean” striker, former West Ham defender Igor Stimac dubbed him a “nice little bastard”, and O’Leary himself conceded his own player could be “a thug”.

Indeed, we released a podcast about our favourite shithouses in which he was lovingly mentioned.

Come the return fixture at Elland Road, Arsenal needed to win to maintain the pressure on Manchester United in the title race, with Arsene Wenger’s side level on points with the Red Devils. Smith, by now brimming with confidence after establishing himself in O’Leary’s starting XI and becoming adored as a local hero, spent the game hurling abuse at Tony Adams, unafraid to bring up details from the former England captain’s private life.

Just as at Highbury, Smith’s antics provoked the reaction he had been looking for. In first-half stoppage-time, Martin Keown lunged in two-footed on the teenager to concede a penalty, only for Ian Harte to hit the bar from the spot. After the break, Adams couldn’t resist getting his own back by clattering into Smith to spark a scuffle.

But Arsenal couldn’t find a breakthrough, twice seeing shots cleared off the line as well as hitting the bar, and they were made to pay when Harry Kewell’s cross to the back post was headed into the back of the net by a diving Jimmy Floyd Hasselbaink. The goal essentially handed the title to Leeds’ fiercest rivals in Manchester United – breaking Arsenal’s hearts at least provided some comfort. 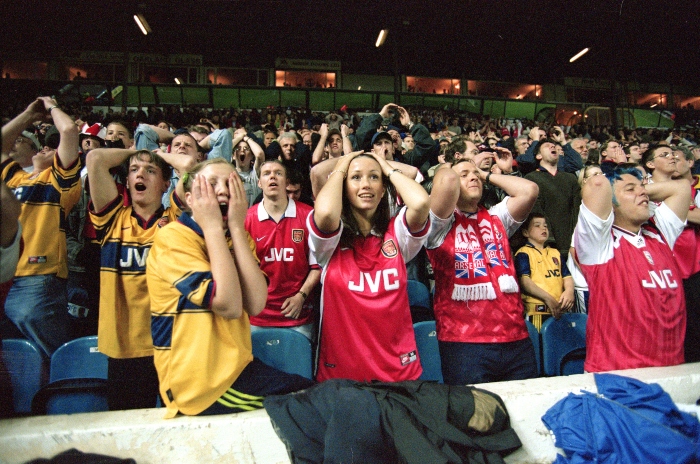 Smith once again tried to rile Adams and Keown when they met for the first time in 1999-00, but on this occasion the experienced duo kept their heads in another fractious encounter that Arsenal won 2-0.

When Smith eventually joined up with the England squad for the first time in 2001, he found himself sat next to Keown at dinner and was asked by the defender: “You’re not going to kick me, are you?”

Arsenal’s return to Elland Road was played out in a much more sombre atmosphere. The game took place a week after Leeds supporters Christopher Loftus and Kevin Speight had been murdered in Istanbul prior to the first leg of their UEFA Cup semi-final against Galatasaray.

Arsenal’s players, who ultimately lost to the Turkish side in a final marred by violence, riots and the stabbings of four more supporters, presented the Leeds team with bouquets of flowers ahead of kick-off before easing to a 4-0 win. There was still an element of petulance, however, with Harte sent off for kicking out at Dennis Bergkamp. 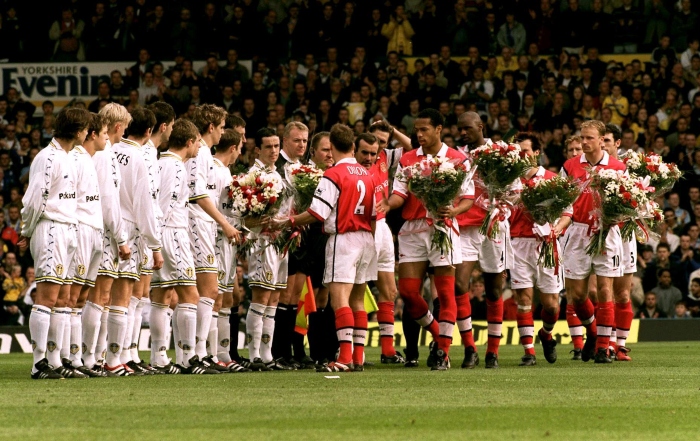 As Leeds surged to the Champions League semi-finals in 2000-01, their fixtures against Arsenal were given an added spice thanks to the signing of Mark Viduka, who found his bete noire in Keown.

The Gunners gained revenge for Leeds ruining their title hopes two years earlier by winning 2-1 at Highbury towards the end of the season to effectively end the Whites’ chances of qualifying for the Champions League again, a failure which ultimately had disastrous financial consequences for the club.

Yet the headlines afterwards were dominated by Keown, who was charged with two counts of violent conduct after appearing to stamp on Lee Bowyer and elbow Viduka.

He was subsequently cleared of the incident involving Bowyer but given a one-match suspension and £10,000 fine for his clash with Viduka, who reacted to the elbow by grabbing the defender by the throat, pinning him against the wall and – as legend has it – lifting him off his feet in the tunnel at half-time.

Wenger loves to see it

Just three months later Leeds were back at Highbury to snatch the win while down to nine men that prompted FA chief Crozier’s pleas for the two clubs to calm the fuck down.

Crozier’s words evidently fell on deaf ears as Viduka got his own back with an elbow on Keown in a 1-1 draw at Elland Road. While the striker managed to escape punishment, O’Leary couldn’t hide his frustrations at his squad’s indiscipline. “If players can’t behave properly they are a liability, you have to move them on,” he said. “I have already told them what I mean.”

O’Leary was also concerned about the resurgence of the ‘Dirty Leeds’ tag, not helped by the high-profile court case involving Bowyer and Jonathan Woodgate.

“When I read things like that it hurts me a great deal,” he said. “It stems from the publicity surrounding the trial at Hull Crown Court. That has put the club back a long way. But from that it has become the ‘in’ thing to have a go at Leeds United. That’s the way things go.”

Somewhat surprisingly, Wenger was remarkably cool, telling the Daily Express:  “I like to see these kind of fights, where both players are going for it. When it goes overboard, the referee has to react and punish. But when you are a supporter and pay to watch a match, you want to see that kind of commitment.”

He added: “They are physical players, not dirty players, and if you take that aggression away from a player like Martin, then they will be less efficient.” 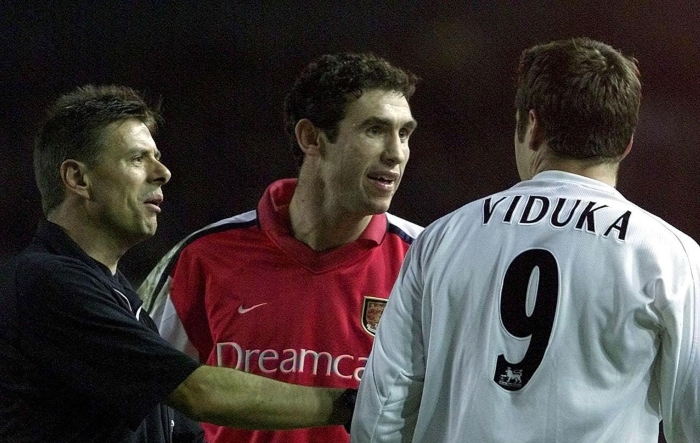 By the time the two sides met once again, O’Leary had been replaced by Terry Venables, who called for calm ahead of the visit of Arsenal in 2002.

But Leeds had more pressing worries as their financial implosion began to show signs of damage on the pitch and Arsenal came away from West Yorkshire 4-1 victors, scoring for a record 47th consecutive game to highlight the contrasting fortunes the clubs were heading towards.

Yet Leeds found the fight to land one more telling blow in a repeat of 1999, winning 3-2 in the capital thanks to Viduka’s late winner to once again gift the title to Manchester United but more importantly secure their top-flight status for one more season.

That victory drew something of a line in the sand in terms of the rivalry. Reminiscent to the post-Revie decline, Arsenal’s dominance saw the fixture lose much of its bitterness. Wenger’s men embarked on their record 49-game unbeaten run to end 2003-04 as the Invincibles; Leeds were relegated upon the campaign’s conclusion having lost by an aggregate scoreline of 13-2 across three league and cup matches against the Gunners.

Perhaps Arsenal vs Leeds United is the fixture the Premier League never knew it needed. Let’s get ready to rumble.

READ NEXT: ‘The Football League’s corrupt’: The self-fulfilling prophecy of ‘Dirty Leeds’