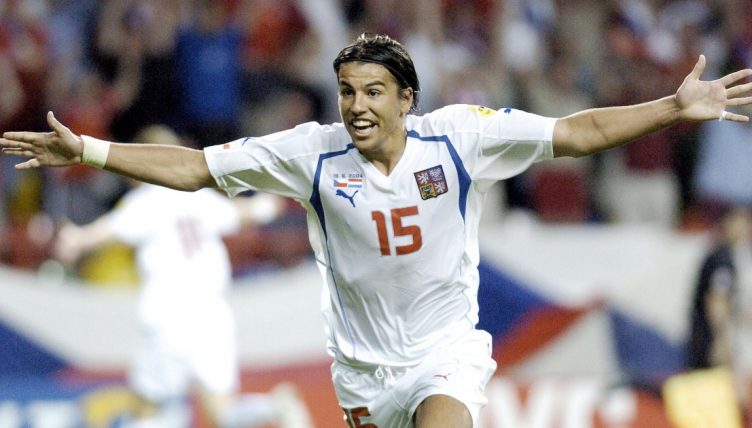 Group stages of major tournaments can sometimes be damp squibs, but Euro 2004 threw up a game for the ages.

The early part of the tournament had already brought with it a shock or two, with Greece surprising hosts Portugal and Germany being held by first-timers Latvia, but things had been low-scoring at times.

That all changed on June 19, though, when the Netherlands and the Czech Republic played out one of the most frenetic, mile-a-minute games in group stage history.

Dick Advocaat’s Dutch squad had drawn with Germany first time out, while the Czechs had come from behind to sneak a late win against Latvia through Marek Heinz, the Banik Ostrava winger who fulfilled the role of breakthrough star which Karel Poborsky had taken eight years prior.

Germany’s 0-0 draw with Latvia earlier in the day probably left both coaches confused as to how good their first result really was, and that might explain the chaos with which the game began.

When two teams meet in qualifying and in the group stage, it can sometimes result in overkill as they battle to stop each other exploiting their respective faults. In this case, though, the Netherlands were buoyed by the prospect of revenge after taking just one point against their opponents en route to Portugal, while the Czech Republic were buoyed by trying to prevent that exact thing.

Advocaat’s men started out as if they were in the last five minutes of a game, rather than the first five, and Ruud van Nistelrooy seemed especially pumped up as Wilfred Bouma headed home an Arjen Robben free-kick to break the deadlock.

The second goal arrived not long after, and this time it was Van Nistelrooy himself doing the business.

Every major tournament seems to have a new or new-ish rule which feels off at the time, and in the case of Euro 2004 it was the ‘second phase’ element of the offside rule (let’s not get started on the ‘Silver Goal’, although the Czech Republic certainly haven’t forgotten).

The Manchester United striker was clear of the last defender as the ball was played through to Robben – some might even say he was goal-hanging – but a new phase had begun by the time the winger had slid the ball across the face of Petr Cech’s goal to give his team-mate a tap-in.

At 2-0, the Czechs might have decided to conserve their energy and hold out for their meeting with an underwhelming Germany team, but perhaps the nature of the goal had given them cause for vengeance of their own. It was within the rules, sure, but barely. Something needed to be done, and it needed to be done quickly.

Without a gift from the Dutch defence, we might never have been treated to this momentous comeback, but everyone has to start somewhere.

Only Giovanni van Bronckhorst knows what he was trying to do with a hopeless pass into the path of Milan Baroš, but the striker still had work to do to hold off the chasing defenders and feed Jan Koller.

Normally you’d expect the approximately 12 feet tall Koller to be the one doing the grunt work and Baroš converting the tap-in, but this wasn’t a game where you got what you expected. After all, this was a game with three goals in the opening 23 minutes when only two of the 15 group games before that managed more in a full 90.

As we know now, though, Karel Bruckner’s Czechs were just getting started.

It would be a mistake to think the Czechs had all the play from then on in, though.

Cech needed to pull off a phenomenal fingertip save to touch Johnny Heitinga’s long-range blast over the bar, and the goalkeeper – who had already agreed a move to Chelsea for the following season – was rewarded with a couple of strokes of good fortune.

First, Clarence Seedorf’s shot from range bounced away off the post, then Edgar Davids’ low drive did the same.

There’s a moment, after the Barcelona midfielder’s effort cannons back out, when Cech seems baffled by his fortune but decides to ride with it.

There are elements of Mehmet Scholl and Carsten Jancker hitting the woodwork against Manchester United in 1999, or Hakim Ziyech doing the same against Tottenham in 2019, where the let-offs are so noticeable it feels like they’re prodding you firmly and urging you to take the hint that you’re supposed to win this game by hook or by crook.

The equaliser wouldn’t come easily, though, and Bruckner’s side would need to work hard to create the perfect goal to draw level.

Koller and Baroš exchanged roles this time, with the big man chesting a cross into his strike partner’s path with such perfect pace and accuracy you wondered whether he had a pair of hands beneath his ribcage to gently drop the ball into the ideal spot.

That’s not to take away from the Liverpool man’s strike. He’s probably never hit a ball more cleanly, getting his body over it just enough and timing it just right to send it accelerating seemingly exponentially on its way into the net.

Edwin van der Sar, who moments earlier had produced a stunning reflex save to deny Vladimir Smicer, didn’t stand a chance, which is probably a good thing as if he’d got in the way he’d have likely lost a finger at a minimum.

This was the point at which it became even more hell-for-leather, if such a thing was even possible. Suddenly we had what was effectively a 20-minute cage match, next goal wins, and the pendulum continued to swing the Czechs’ way when Heitinga was sent off for a second yellow card.

Captain Pavel Nedved hadn’t really been in the thick of things at the danger end, but it felt as if he’d been waiting for this moment, finding a second gear as soon as the game really opened up. Strolling through a massive midfield gap, he let rip with a real thunderbastard of a shot to once again leave Van der Sar flailing.

It swerved. It dipped. It flew. It arced. It looked destined for the back of the net. But the woodwork intervened, and Poborsky couldn’t react quickly enough to turn in the rebound with the goalkeeper out of the picture.

One might argue the game deserved a winner of such quality, but the football gods said no. A moment of genius would be required to win the game, sure, but that would be useless if it wasn’t combined with widespread chaos and panic from which such genius could emerge.

Inevitably, with just two minutes left, we got that moment.

Heinz’s low, drilled shot could have provided the winner only for Van der Sar to get down well to keep it out, and from that moment we were waiting for Poborsky to put home the rebound.

It was a question of whether he’d try to hit the ball under the goalkeeper or beat him with power, but somehow he found a third way. The veteran was playing chess while everyone else was in a checkers game, ignoring more than 80 minutes of pure instinct to take the unprecedented move of thinking a step ahead.

As he rolled the ball across to give Smicer an empty net, it wasn’t that we were denying it was the smartest thing to do in the situation. Rather, we were stunned that he could also see that was the case.

This wasn’t a game for calm, which was exactly why it was one where calm won out.

The Czech Republic really should have won Euro 2004.

They eased past Denmark in the quarter-finals but came up short against a Greek side who edged them out thanks to Traianos Dellas’ Silver Goal in extra-time. After the free-flowing, fearless attacking of their first four victories, they either froze or forgot what made them great.

Four years later they wouldn’t have the same luck in the group stage, with Cech’s error helping hand Turkey victory in a similarly topsy-turvy game in Geneva. On that occasion, they were punished for failing to get everything to click, almost as if to tell them “you had your chance”.

At least they got that fleeting high, and a role in what has to go down as the most entertaining game in the history of the European Championships.