A detailed recollection of the first ever PL Manchester derby 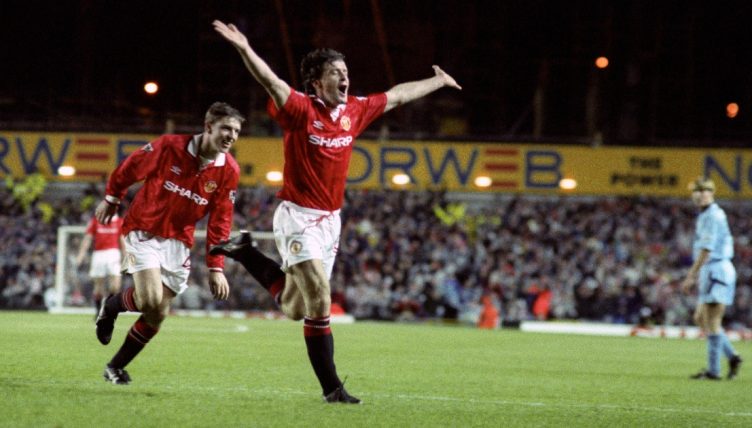 Manchester United and Manchester City had to wait until December of the 1992-93 campaign for their first meeting of the Premier League era.

When the teams met at Old Trafford, there was no sign that either would come close to a title: United were 12 points behind league leaders Norwich City going into the Sunday afternoon game, while City were two points further back.

However, the result would ultimately allow Alex Ferguson’s side to maintain what would eventually become a run of 26 points from 10 games, lifting them from also-rans to outright contenders for the inaugural Premier League title, while City’s defeat – their second of three in a row – would ensure they remained in mid-table for the whole season.

United named Eric Cantona in the squad for the first time, having signed the Frenchman from Leeds United just nine days earlier, but he was only ready for a place on the bench after going more than a month without playing.

City, meanwhile, went with a front three including Mike Sheron, who had five goals in his previous five games, alongside Niall Quinn and top scorer David White.

Despite being the home side, United had Mark Hughes on his own up front, though Ryan Giggs and Lee Sharpe were there to provide support from the wings.

CIty had held their own early on, with Quinn causing problems for Steve Bruce and Gary Pallister in the home defence, but the opener fell to United after Bruce was able to cause problems in the other half of the pitch.

The centre-back showed great strength on the edge of the City box after a quick Bryan Robson free-kick caused panic, and he was able to lay the ball back for Paul Ince to crash home a shot beyond the dive of Tony Coton.

It was the midfielder’s first goal of the season, and the skidding effort on the wet Old Trafford pitch gave Coton no chance.

United threw Cantona on for Giggs at half-time, switching to two up top, and midway through the second half they thought they had a penalty when Robson went down under an Ian Brightwell challenge, only for referee Gerald Ashby to wave away the claims.

It didn’t matter, though, as a couple of minutes later, Hughes fired home an emphatic left-footed effort to seemingly settle the tie.

The Welsh striker won the first ball, flicking it goalward in an attempt to find his strike partner Cantona. The ball was cleared, but Hughes was alert to it, getting there before two City players to display faultless chest control before absolutely leathering the ball into the back of the net.

That should have been that. However, within 20 seconds of the restart, City were back within a goal of their neighbours.

Rick Holden swung in a tantalising cross from the left and Niall Quinn rose to meet it, only to power his first header into the back of Steve Bruce.

The Irishman hadn’t given up, though, and he beat Peter Schmeichel to the dropping ball to poke home and give City hope.

The teams would meet again in April, with Quinn among the goals once more, and this time his contribution was enough to earn City a point.

The big number nine opened the scoring early in the second half, but Cantona – by now a big part of United’s title charge – levelled with just over 20 minutes to play.

United dropped just two more points between then and the end of the season, racing clear to wrap up the title with games to spare, with City arguably only getting their revenge in 2012.

READ MORE: 13 signings Manchester United missed out on – and who they signed instead