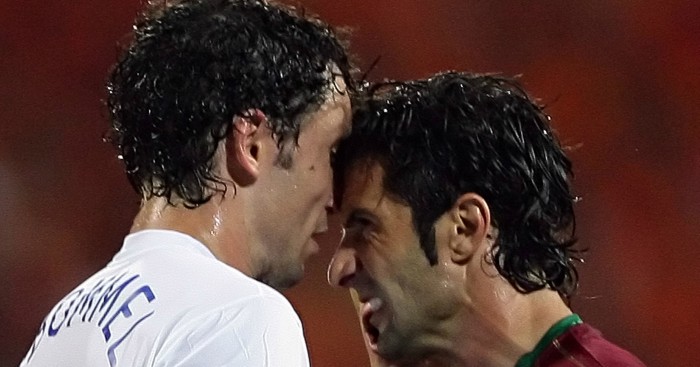 The 2006 World Cup in Germany was one of the most memorable of recent history – not least because of the last-16 tie between Portugal and the Netherlands that would become known as The Battle of Nuremberg.

It will go down as one of the most infamous football matches in World Cup history, with Russian referee Valentin Ivanov forced to brandish 20 cards, four of them red – a record high for any FIFA tournament.

We have taken a look at every single card issued during the game to remind ourselves of just how mental it really was.

Perhaps we can blame Van Bommel for all of this? Just two minutes after kick-off, his cynical trip is met with a deserved booking.

Talk about setting a precedent…

Cristiano Ronaldo the victim again, this time receiving a much more sinister challenge.

Let’s face it, that should be a red card.

Oh, get up Mark! That’s a harsh one in our book. We’re still not really sure what Maniche did wrong here.

There’s no malice in this.

Things are getting tasty now. The way Costinha charges into this one – despite everyone in the stadium knowing he isn’t getting anywhere near it – means there was only one outcome of this lunge.

What the Portugal midfielder needs to do now is keep his cool, not do anything stupid and get to half-time safely…

Wait, WHAT? This is Sunday league stuff. This is not a tactical handball to stop an attack, Costinha was on the halfway line.

If ever you wanted a football personification of the phrase ‘moment of madness’, we have one for you here.

Given the way he twists and slams to the ground, you would be forgiven for thinking someone in the stands shot Van Bommel with a crossbow. But no, it was 5’8 Petit doing the damage.

It’s still a booking, mind. The intent was there.

Oof, no complaints with this one.

If you’re going to headbutt someone, do it like Zinedine. Luis Figo should be sent off for this, but the ref clearly didn’t see it, the lucky boy. It’s soft again, but a red card nonetheless.

Having said that, spare a thought for Van Bommel – today’s pantomime villain – who needed reconstructive facial surgery after this spineless assault.

If this was a separate incident, we may have given Boulahrouz the benefit of the doubt. But this is the Battle of Nuremberg, carnage is unfolding in front of his very eyes, and Figo has just headbutted his team-mate.

Another one you can see coming from a mile away. Deco comes steaming in to scythe down Johnny Heitinga, and it’s oddly pleasing on the eye – perhaps courtesy of the length of time the Dutchman spends in mid-air.

Some uncharacteristic petulance from Sneijder in the aftermath of that Deco tackle.

In the 2010 final against Spain – where the Netherlands also returned to the footballing dark ages – Sneijder was one of only two starting outfield Dutch players not to be booked.

Van der Vaart gets booked for something. Your guess is as good as ours on this one.

Finally! There’s no such thing as a continental footballing scuffle until a furious goalkeeper sprints out and gets himself booked. Straight out of Volkan Demirel’s playbook.

That’s horrible! It was a relatively low key evening for the Portugal left-back until now – so he thought f*ck it and gave Van Persie a good kicking. As agricultural as it gets.

A fittingly rubbish way to end. Not content with just three red cards, van Bronkhorst gives up and cuts down Thiago to round off the day nicely.

It’s easy to forget that this was a genuine knockout match at a World Cup. Portugal ended up winning the game 1-0 – courtesy of a Maniche goal midway through the first half – but it’s hard to imagine much football being played in between these incidents.

Being the man of fairness and integrity that he is, Sepp Blatter was outraged the referee let the image of his squeaky-clean regime slip, claiming that Ivanov himself should be given a yellow card himself.

Portugal, hampered with the suspensions of Deco and Costinha, faced the might of England in the quarter finals, and we all know how that ended.