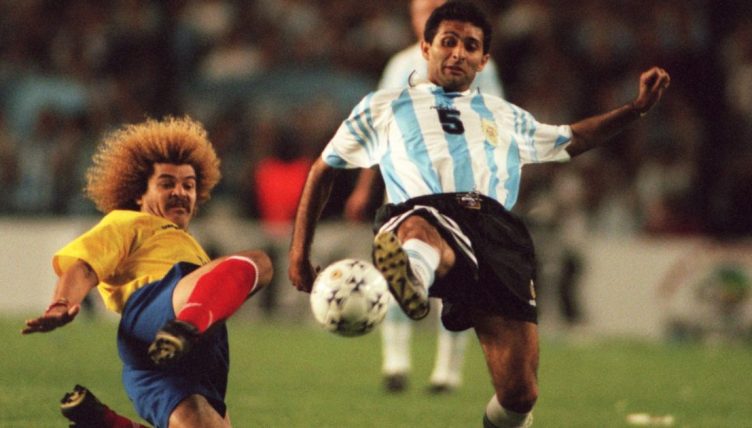 Often, the cover featured the footballing star of the moment. If you were lucky enough to be that star, then you had made it.

But on September 7, 1993, El Grafico changed tack for a week, and quite drastically too. There was no superstar on the front page. Instead, the cover was black and featured a word printed in large, bold, yellow font near the top of the page: “¡Verguenza!” – ‘Shame!’

Below a series of probing questions gave a hint as to the inquest that was contained in that edition’s pages.

Two days prior, Colombia had travelled to Buenos Aires for World Cup Qualifier and in 90 minutes of Cafetero delight, had stuck five past their hosts without reply. It was an upset for the ages.

Argentina were double World Cup champions and 14-time conquerors of the Copa America. They had won their most recent world title with Diego Maradona dancing his way around the planet’s finest defenders just seven years prior and the last two continental titles. They had never lost a World Cup qualifier at home.

Not long before their game at the Monumental stadium, Maradona himself had said that historically the Argentines were “up here” and the Colombians “down there”, accompanying his words with the appropriate gestures.

He was right, too. Colombia, at that point, had never won a major trophy and had been to the World Cup only twice, not making it past the last 16 on either occasion.

Even though Colombia had beaten the Albiceleste 2-1 in Cali in the first round of the qualification process, Argentina – without Maradona, who watched from the stands owing to a drug ban, but with Gabriel Batistuta, Fernando Redondo and Diego Simeone – were expected to be far too strong to even be challenged on home soil.

This, though, was not the Colombia of old. This was the Colombia of Freddy Rincon, Carlos Valderrama and Faustino Asprilla. This was a team that played exhilarating football to an intoxicating beat; a team brilliantly led by legendary manager Francisco Maturana.

They were committed to keeping the ball and expressing the talent and technique that their players had long possessed but often failed to demonstrate when it mattered.

For the Argentines on September 5, 1993, it would prove too much to handle.

The build-up to the match had been of the sort you would expect for an early-90s World Cup qualifier in South America. The Colombians had been harassed and made to feel uncomfortable from the moment they touched down at Ezeia airport.

The game started with similar intensity, both sides looking to press the other high up. Colombia, though, were first to fire a shot across the bow of the enemy.

Left-back Wilson Perez played a beautiful outside-of-the-boot pass up the line into the feet of Maturana’s on-pitch orchestrator, the wild-haired, supremely skilled Valderrama. Valderrama turned his man and played in Asprilla, whose bandy legs whirred into action.

Asprilla turned this way and that, yet four Argentina defenders surrounded him and he failed to get a meaningful effort away. Colombia’s route to goal, though, had been clearly mapped out in the mind of their midfield creator.

Colombia followed the Asprilla run up by creating another chance, this time with Asprilla’s strike partner Adolfo Valencia leaving Julio Saldana on his backside with another twisting run before firing a shot at Sergio Goycochea. But it was by no means one-way traffic.

Argentina were pushing too and a poor Colombian pass gave 24-year-old No.9 Batistuta possession on the edge of the box. He laid it off to Leo Rodriguez, burst beyond the last man, got the ball back eight yards out and with only Oscar Cordoba to beat, he completely and utterly fluffed his lines. “No, no, no,” screamed the Argentine commentator in disbelief.

By the midway point of the first half, tempers were starting to fray and yellow cards were brandished to Simeone and Valderrama for a scuffle off the ball. Soon though, Valderrama would show the prettier side of his game again.

Four minutes before half-time a loose ball fell to Colombia’s No.10 in the centre of the pitch. He was tightly marked, but that did not matter. He sauntered away from his nearest pursuer and signalled his intentions to Freddy Rincon.

Rincon knew what was coming and began to run. Valderrama’s ball was timed perfectly, Rincon took it in his stride and with one touch was in behind the defence. The midfielder rounded Goycochea and slid the ball home. Colombia were ahead, and what a time to score.

The second half began and three things were clear. First, Argentina would have to come out and attack. Second, Colombia were happy with that, content to hit them on the break. Third, Valderrama now had a target on his back.

Two minutes in, he picked up the ball in between midfield and defence, nipped past Oscar Ruggeri with a salsa-style hip shimmy and for his troubles got whacked up in the air.

Soon, Colombia would take revenge. Rincon found some space, slightly deeper and near the right touchline. He spotted Asprilla running into that same space behind the defence and set him away with a raking cross-field pass. Asprilla did the rest.

Inside the area, he took it down perfectly, feinted to go left but cut inside. The angle was made and the ball slotted home for 2-0.

The bear had been poked now, not just once but twice. It was ready to roar out of its den. Argentina came out, committing men forwards in greater numbers than before. They knew this was important – avoiding defeat essential if they were to finish top of their qualifying group.

A Ruggeri header from a corner flew over. A Batishot stung the gloves of Cordoba. Then another corner was swung in and the ball fell to Batistuta once more.

He wriggled past two yellow-shirted defenders and made room. Surely third time would prove the charm. He unleashed one of his rockets but there was Cordoba again, at full stretch to tip it around the post.

The goalkeeper was just 23 and would not have been playing had Rene Higuita not been in prison for illegally arranging the payment of a ransom to a drug cartel. Yet Cordoba was inspired in between the posts. The save from Batistuta was followed by a string of good stops, but there was no doubt the fingertip effort was the pick of the bunch.

Try as they might, Argentina could not find a way through. With nineteen minutes to go, Colombia finally broke out. Asprilla led the attack, bursting from his own half up the left wing and into the box. His cross was cleared but the ball worked its way back in and Rincon was there once again. His finish was sloppy but the result was surely now in the bag. 3-0, not long to go.

Argentina had to keep trying to salvage something – if only pride. But that only opened them up more. Two minutes after his lung-bursting break, Asprilla was back at it, this time pressing Jorge Borelli into a sloppy pass.

Asprilla pounced and once again his odd running style saw him fly beyond the last man. This time, his finish was even better than the first. He almost stumbled towards the left corner of the Argentinian area, then looked up and saw Goycochea coming off his line. Asprilla opened up his body, swung his leg at the ball and sent a beautiful, looping shot into the far corner. The game had already been won; now it was emphatic.

Still it was not enough. Still Colombia looked to break. With six minutes to go, Valencia made the emphatic humiliating.

Valderrama released Asprilla into that same space that he had early in the first half. This time, rather than run beyond his man, however, he paused and cut back. Valencia was screaming at him, “Wait for me, wait for me.” He rushed into a gap in the backline and Asprilla played him in. The embarrassment was complete. ¡Verguenza!

“Before [I arrived in] 1987, we had never found our own way,” Maturana told The Blizzard years later. Now they had. “We used a style of play to express what Colombia the country was all about: people who are known for being happy, people who are dreamers, people who are easily inspired.”

In concrete terms, the loss meant Argentina had to play Australia in a playoff to reach the World Cup in 1994, which they won. But the symbolic value went beyond that. This was a blow to the Rio Platense nations, who had lorded it in South American football for too long.

The next year the World Cup came around and Colombia, not Argentina went into it among the favourites. “For me Colombia is the best team,” Pele said before the tournament. “It doesn’t mean they are going to win it but they will be one of the four semi-finalists.”

Unfortunately for a nation scarred by long-running political violence and the influence of drug cartels, that did not happen. Indeed, it was far worse than expected, defender Andres Escobar murdered 13 days after scoring the own goal that put Colombia out.

Some blamed the 5-0 for a perceived arrogance on Colombia’s part. Maturana denied it: “[Football] is a vehicle for dreams and disappointments and winning never does you any harm. That result has nothing to do with what happened later on.”

Even with the disappointing result in the USA in ’94, that win over Argentina remains a huge moment in Colombian national lore. The game is repeated every year on Colombian television and, as Freddy Rincon once said, “Every time Argentina and Colombia play, the 5-0 will be present.”