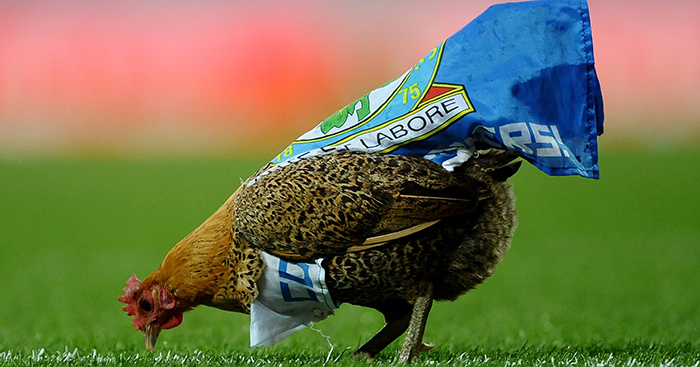 David Dunn eating chicken. Of all the vivid images that can symbolise a club’s downfall and disgrace, it’s hardly the most sinister.

For Blackburn fans, however, that unappetising sight represents all that has gone wrong with their club over the course of eight long years.

Back in 2011, a year after Indian poultry conglomerate Venky’s had taken over the club, 11 members of the squad were asked to appear in an advert for the company’s chicken products.

The 25-second video changed the face of Blackburn forever.

Gone were the memories of Shearer and Sutton; in their place a bemused David Dunn and brightly coloured pieces of meat.

But with Rovers seemingly back on the up, perhaps now is a good time to review that seminal piece of cinema to see if it can be reclaimed as something good, something honest, perhaps even something beautiful.

Did you feel that?

Straight away, you get the impression that production company ASP knows what it is doing, as the advert begins with a classic movie trope: the shaking water cup.

And what could be the cause of those deep tremors in the Ewood Park dressing room? Why, it’s the thousands of expectant Blackburn supporters with their distinctive rolled Rs, of course.

Next we see the 11 huddled players from the perspective of the floor. Again, credit where credit is due to ASP, you’ve actually got a pretty balanced team there. One goalie. Two forwards. We can work with this.

One can’t be sure what the players are saying, but if any of them have taken note of the posters hung conspicuously around the room — OUT WORK THE OPPOSITION, BE PROACTIVE INSTEAD OF REACTIVE, DOMINATE, MORE GOALS, BE RUTHLESS AT SET PLAYS — one can assume it’s important stuff.

Now why is everybody looking at the floor?

After making the sign of the cross, the players lift their heads in slow-motion to reveal nine plates of chicken, the ideal amount to share between 11.

David Dunn looks delighted, while Ryan Nelsen and Michel Salgado immediately start to tuck in. For Dunn, however, things will soon take a turn for the worse.

Dunn is more flummoxed than he has ever been before – apart from that time he attempted a rabona.

Unfortunately, the pranksters won’t be laughing for long. Roberts will be sold six months and zero Premier League goals later; Pedersen, probably the more unfortunate of the two, will remain beyond the club’s predictable relegation.

The advert concludes with captain Nelsen sombrely licking chicken residue from his finger while walking onto the pitch.

Along with other senior members of the squad, he will be released six months later in a bid to reduce the wage bill.

Something in his eyes says he knows this.

It is only when the Venky’s logo appears, underlined with the words GOOD FOR YOU, that we realise the advert is directly squarely at Kean, the only person to whom that slogan could apply.

‘My stomach was in knots’

The advert might have depicted a tight-knit group of friends enjoying their favourite dish, but later reports suggested all was not well.

Salgado, one of the advert’s stars, admitted that his “stomach was in knots” after sampling the Venky’s products.

“I am not a big fan of spices and sauces and I think I came off worst,” he told FourFourTwo. “When we filmed the advert I had to pretend to love it but the truth is one bite and my stomach was in knots.”

Shortly after making those comments, the Spanish full-back was frozen out of the first team so the club wouldn’t have to give him an automatic one-year contract extension.

Steven Nzonzi, a less prominent face in the ad, later called it “really weird, especially as we weren’t doing very well on the pitch.”

“I don’t get what that was all about,” he added. “But you think, ‘yeah they’re new owners and they will do something amazing for the club’ so you just follow what they say.”

Promotion will have done little to improve the relationship between Venky’s and Blackburn fans, but perhaps if they can get back to the Premier League, that infamous advert will someday be seen in a more positive light.

After all, it remains — in a tremendously superficial sense — a happy picture of Rovers life, all smiles and practical jokes and marinated white meats. Perhaps, with time, the more sinister reality of the episode can be washed away.

Who knows, perhaps it will get a sequel.

John Jensen: It was a surprise how Venky’s tried to make it work