A forensic analysis of of every referee mistake in Italy v South Korea, 2002 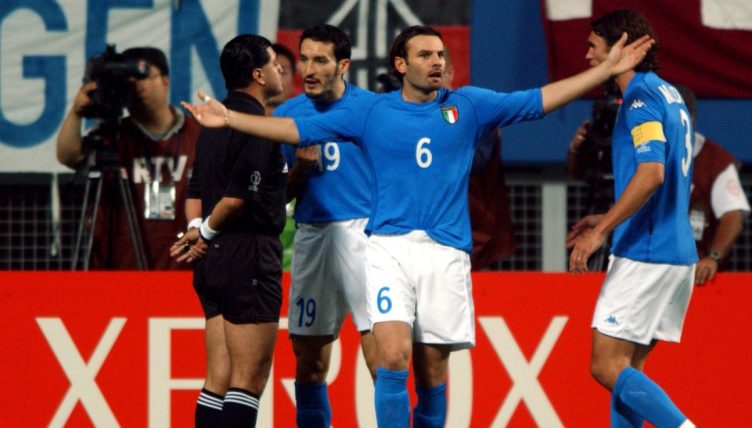 The 2018 World Cup was the first major tournament to use VAR, ending an era in which the heartbreak of an exit could be pinned squarely on the plainly wrong adjudicating of one man. A man like Byron Moreno.

Moreno, the Ecuadorian referee in charge of Italy’s second-round loss to co-hosts South Korea in 2002, has ascended to the ranks of Tom ‘disgrace’ Henning Ovrebo and Graham ‘three yellows’ Poll.

He’s an old wives’ tale of bad refereeing, a boogeyman with a whistle, wearing shorts you wish were at least three inches longer.

Mind you, his subsequent suspension for match-fixing by the Ecuadorian FA later in 2002 probably didn’t help that image. Nor did that time in 2010 when he was caught smuggling six kilos of heroin through JFK airport in his pants.

Lest we forget: this man was left in charge of a World Cup second-round match that the co-hosts were playing in.

Every ref makes bad calls, but few have looked like quite as much like they were stealing someone’s lunch money while they did it as Moreno. Gaze into his smug currants for eyes and you see no reason to calmly reassess his refereeing decisions that night in Daejon.

What you want to do is watch a sensationalist YouTube video cutting together every Korean foul to an X Factor finals backing track.

Yet we did find the courage to go back and watch all 117 minutes of that match, training an objective eye on Mr Moreno so we can truly remember this rapidly-ending era of fallibility for what it was.

It only took three minutes for the controversy to start. Almost immediately, South Korea were awarded a penalty after Seol Ki-Hyeon went down in the box as a result of… well, some kind of contact with a bemused Christian Panucci.

But South Korea couldn’t convert. Buffon foiled Ahn, tipping the ball clear at full stretch to his right. Disaster averted, albeit temporarily, for the Azzurri.

Was it a penalty? Honestly, it’s impossible to say from the TV footage. The incident wasn’t replayed from any other angles, but it is striking that even the South Korean players themselves looked a bit surprised to have been awarded a spot kick.

In the absence of a better angle, we’ll have to give Byron and his officials the benefit of the doubt on this one.

But let’s just keep it in our pocket for later on, eh?

Seven minutes in, Big Chris Vieri and Kim Tae-Young went up together to contest an aerial ball, and Kim went down hard having caught the Italian’s elbow to the nose. Moreno called the foul but didn’t book Vieri.

The striker looked concerned for Kim and his profusely bleeding nose in the following minutes, gesturing to other Korean players that he must have accidentally caught him with his elbow with an earnestness that we, for one, are buying.

This isn’t generally brought up as one of the match’s controversies, but it’s another one to refer to later on when the elbows fly again.

Twenty-one minutes in, Franceso Totti followed suit by elbowing Kim Nam-Il in the nose while jostling for a header.

No amount of heroic Mediterranean gesticulating could save him from Moreno’s book, and that first yellow would prove fateful later on.

Why was he booked while Vieri got away with such a similar incident? Well, with all the goodwill in the world towards Totti, there did look to be a bit of intent in his flailing arm, whereas Vieri’s seemed to make contact accidentally.

If Moreno was to be judged on these calls alone, he’d probably walk away with his reputation intact.

When Kim Tae-Young chucked an angry limb at Alessandro Del Piero’s face inside the penalty box just after the second half began, both players ignored the rules of football.

Kim, riled up by Del Piero’s shirt-pulling – and let’s face it, probably still not quite over that earlier nose-bludgeoning – let forth a premeditated swing at the Juventus forward. We’ve checked the rules, and that’s definitely not allowed. Certainly not in the box.

For his part, Del Piero completely forgot to go to ground and sell the penalty for all it was worth. Instead he stumbled around looking like Ryan Gosling cosplaying Inspector Clouseau.

It wasn’t enough to alert Moreno to the severity of the incident, who instead employed the old ‘both of you just calm down’ chat instead of awarding one of the most clear-cut penalties you’ll ever see.

At this point, you’re within your rights to say Moreno’s had a bad game.

Not much analysis required for this one. Approaching 90 minutes, Paolo Maldini defused a goalmouth scramble by clearing the ball while laying on his back, earning himself a great big wallop in the back of the head from Lee Chun-Soo’s boot for his troubles.

Not only did Mr Moreno’s cards stay in his pocket – he didn’t even stop play.

Following an 88th-minute Korean equaliser, the game’s defining moment came 12 minutes into extra time went Totti was sent off for what Moreno seemed quite certain was a dive in the box. Was it a dive?

We’re meeting Moreno more than halfway here, but from some replay angles it did look like Totti began to go down before contact was made.

The angle from the left side, however, showed that Song Chong-Gug took out Totti’s standing leg, causing the No.10 to fall.

He did later make contact with the ball, but it was a matter of coincidence more than technique.

It should have been a penalty. A penalty with the potential to finish the match there and then, sending Italy through to the quarter-finals and eliminating the co-hosts.

Instead, the Azzurri played through the rest of extra time with 10 men.

Roma’s Damiano Tommasi put in a superb shift that night, and that shouldn’t be forgotten.

He might not have had Gattuso’s gladiatorial presence or Del Piero’s vision, but he proved to be Italy’s most enterprising player on a night of optimistic long balls and static midfielders.

He was very nearly rewarded for his efforts with a golden goal in the 20th minute of extra-time, too, but he was deemed offside by a hair’s width, and for the fifth time that tournament, Italy found the net only to have the goal waved off.

Having moved past righteous indignation a few fouls ago, Tommasi and his team-mates simply laughed at this call. It was not to be their night, it seemed, even if they found the net.

In truth, Italy in 2002 were not great, and despite wearing what was empirically the best kit of the era, were not performing at a standard that screamed ‘they’ll lift the cup in three weeks, this lot’.

But the limp performances and deep defensive lines have faded from memory, leaving only the mental image of Moreno showing Totti the red card and looking like he’d just laid down a royal flush.

Does the inception of VAR mean we’ll never see his like again? The jury remains out.