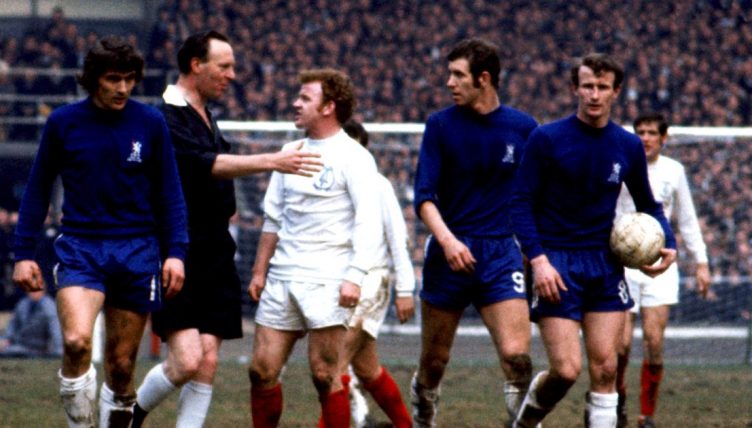 There are occasions where two forces seem so dramatically opposed that it’d be rude if they weren’t rivals.

Tom and Jerry. Batman and the Joker. Stormzy and Wiley. When objects of equal strength come into direct competition with each other, it is no surprise that sparks begin to fly.

While the surface-level differences may seem the instigator for rivalry, another school of thought is that deeper similarities between warring factions are the real reason for the simmering hatred. Put simply, rivals have more in common than they’d ever dare to admit.

Which leads us nicely to Chelsea and Leeds United.

Just over 50 years ago, the two clubs were the clearest representation of England’s North-South divide.

Chelsea, emblematic of swaggering London, where the players sip champagne on the King’s Road, and Leeds, from the grim north, where the locals frequented working men’s clubs and played carpet bowls.

Glamour versus dour, caviar versus gravy and a whole other host of stereotypes enriched the feelings between the two.

However, both clubs had plenty in common back in 1970. Chelsea and Leeds were two of the country’s ascendant clubs, challenging the quickly establishing elite of Liverpool, Manchester United and Tottenham. Fittingly for two upstarts, both clubs had players well versed with brutality and beauty.

In his autobiography, Leeds legend Johnny Giles admitted that a “special kind of animosity” existed between the sides. Chelsea’s Ian Hutchinson was more succinct: “We hated them and they hated us.”

Chelsea and Leeds faced each other six times during the 1969-70 season, so when the two sides reached the 1970 FA Cup Final it was an unsurprisingly merciless encounter.

Played on a Wembley pitch that was more Weston beach than the snooker surfaces of today, the showpiece occasion was a mix of fantasy and farce.

Jack Charlton opened the scoring for Leeds, just slightly aided by the ball failing to bounce in the mud and trickling over the line. Having battled each other to a boggy stalemate, not unlike the Battle of the Somme, the match ended 2-2.

On This Day 1970 #lufc
On a terrible playing surface, Big Jack and Mick Jones with the Leeds United goals in the 2-2 draw against Chelsea at Wembley.
History is made, as its first FA Cup Final to go to a replay.#lufc100 #facup pic.twitter.com/trR83GMnoZ

In the days before penalties, a replay was required. Having been alarmed by the dire Wembley surface, the FA decided to host the rematch at Old Trafford.

An audience of 28 million settled down to watch the game on the BBC, a number that’s only ever been topped by the 1966 World Cup final. The country was in for an X-rated treat.

The carnage started early. Chelsea’s Neil Webb had been moved to centre-back after being roasted by Leeds winger Eddie Gray in the first encounter.

Within two minutes of the game’s commencement, Gray was lying prostrate on the turf as mere collateral damage in Webb’s personal revenge. The barometer had been set.

The tone for the replay was set in the first 10 mins with a succession of crude fouls.

After just 2 mins David Webb – who’d been run so ragged by Eddie Gray in the final that he’d been moved from RB to CB – saw an opportunity for revenge with a flying 2 footed lunge… pic.twitter.com/iTzasrqr2J

Running battles were developing everywhere, with infamous Chelsea hardman Ron Harris playing with the energy of a small child after a full-fat Coke.

Harris successfully crippled Gray before half-time, rendering the Leeds magician neutered from the game’s proceedings in the age before substitutions.

His attempt at something similar on Terry Cooper resulted in a pair of ripped shorts.

🗣Nothing wrong with this, ref!

Ron 'Chopper' Harris keeping Leeds at bay during the 1970 FA Cup final replay – which you can watch back in full on the Chelsea app at 7.30pm (UK time)! 👊 pic.twitter.com/fzRMeVjoVz

Meanwhile, Leeds’ own enforcer Norman Hunter was getting stuck in with the relish of a recently released hostage demolishing a roast dinner. One challenge on Eddie McCreadie led to the pair exchanging numerous blows in a spectacle that only a cartoon cloud would enhance.

At this point, Leeds were ahead through a Mick Jones goal. This was potentially aided by the incapacitation of Chelsea keeper Peter Bonetti, injured in an aerial challenge with the Leeds forward that commentator Kenneth Wolstenholme declared “should have come with an X-certificate”.

Considering Wolstenholme fought in the RAF during the Second World War, this was strong stuff.

31’ A pivotal moment. A high ball into the box sees Jones and Bonetti go up for it at the near post. Bonetti takes some time to get up and looks in real pain.

The match is stopped for almost 4 mins pic.twitter.com/HmZiurQudu

Bonetti emerged after half-time unable to take goal-kicks, yet his string of saves were crucial in deciding the match.

With 12 minutes remaining, legendary striker Peter Osgood equalised for Chelsea after exploiting a lapse in concentration from Jack Charlton.

Charlton was said to have kept a little black book filled with players he needed to exact revenge upon, but Osgood was afforded no such warning when, after fouling the World Cup winner, he was ungraciously barged to the turf in hilariously petty fashion.

52’ An enduring image of the match as Osgood goes straight through Charlton’s back. Big Jack springs up and shoulder barges Osgood to the floor. Baldwin comes racing in but the linesman gets in between to prevent any escalation.

No bookings of course! pic.twitter.com/x2vYPm1Wr0

The most brutal act of violence was still to come. Billy Bremner was one of the best midfielders to ever grace the British game, and his fearsome reputation was earned because he gave as good as he got.

Engaged in a running battle with Hutchison, reminiscent of two toddlers squabbling over the next turn on the swings, this combustive clash was always likely to be the ingredient that caused the pan to boil over.

56’ An intense 60 seconds that includes Bremner sliding in studs up on Hutchinson, who swings a wild boot back at Bremner, followed by some excellent play from Leeds culminating in Jones teeing up Giles to shoot inches wide from the edge of the box. pic.twitter.com/2G8Oir8q16

Yet it was McCreadie who committed the night’s primary act of savagery, leaping high into the air, missing the bouncing ball and performing a karate kick to the head that “almost cut Bremner in half”, according to Blues defender John Dempsey.

Two years earlier, Ronnie Hilton released ‘Glory Glory Leeds United’, in which he sang of Bremner: “For the sake of Leeds United he would break himself in two.” His words were almost proved prophetic courtesy of McCreadie’s challenge.

85’ The ball loops towards Bremner in the box, when McCreadie launches a Berardi-esque kung-fu kick towards his head! Surely a penalty? No, the ref waves play on!

Chelsea break upfield and Hutchinson smashes it into the side netting. If he’d scored Leeds would have gone mad. pic.twitter.com/D0nCQI1vQJ

Ultimately, Chelsea won the final with an extra-time goal from Webb. Leeds were inches away from the treble, 29 years before Manchester United achieved the feat.

This defeat, combined with a semi-final loss to Feyenoord in the European Cup and Everton capitalising on a late-season collapse in the league, meant they ended the season with nothing.

The main memory of this encounter was its sheer brutality. The game has achieved such notoriety that it has been re-refereed on two separate occasions.

In 1997, Keith Hackett used the modern interpretation of the rules to give out six red cards. In 2020, Michael Oliver gave out 11 – with McCreadie being sent off twice. Chelsea attracted another five red cards, with Leeds being given four.

The Battle of Nuremberg and Battle of Bramall Lane seem like a teddy bear’s picnic by comparison.

The match also crystallised a rivalry that has simmered away ever since. Settle down with a bag of popcorn and watch the sparks fly.

READ NEXT: A forensic analysis of the Battle of the Bridge