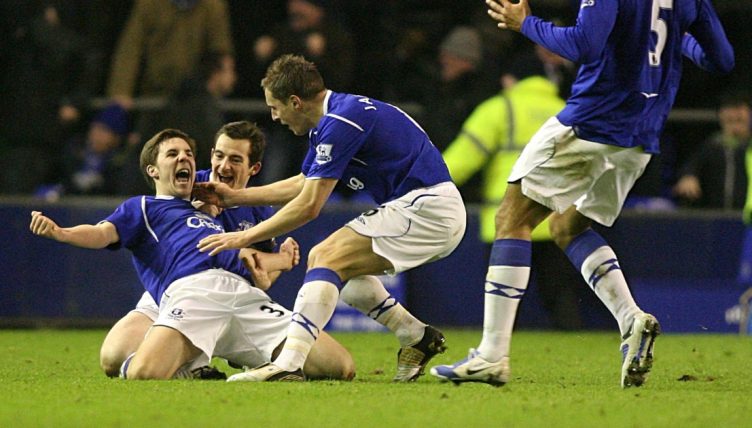 Everton fans will have some great memories of the 2008-09 season in which they made the FA Cup final – but one of the most memorable goals of that campaign was never even seen by many.

The Blues got to the final the hard way, seeing off Premier League opposition in every round from the fourth onwards, with the first of those perhaps the sweetest of them all, a first Merseyside Derby victory in seven, secured at the very last through Dan Gosling.

The game was one of two big fixtures in the fourth round of the cup, alongside Manchester United’s Dimitar Berbatov haunting his former club Tottenham Hotspur, but this one was always going the distance.

After Joleon Lescott and Steven Gerrard exchanged goals at Anfield, the replay was scoreless and seemingly heading for penalties. ITV certainly thought so anyway.

There’s a bit of urgency as Lescott, Jack Rodwell and Mikel Arteta exchange passes inside the Everton half, but nothing to suggest what follows will be anything out of the ordinary.

Sure, cutting to an ad break with the clock reading 27:30 in extra time is a little out of the ordinary, but let’s see where ITV are going with this.

The first advert is the initial giveaway, an ident from sponsors E.ON in which a family gets to its feet in celebration of something, but it cuts away before we can see what it is.

We really ought to have seen this as the sign it was. In fact, the whole run of adverts in that minute-long period were one big clue, so much so that you almost expect to see Hercule Poirot come back at the end and show you just what you missed.

The next ad, for example, is for Tic-Tacs. You have them working together on a golf course to get the ball in the hole. Teamwork… hitting the target… sweets… toffees… my God!

The one that follows, though? The deadest of dead giveaways.

Opening with the caption ‘My Story: Dan’, we see the beginning of an Action for Children commercial, but we’re back at Goodison Park before we have an opportunity to gauge exactly what’s going on.

As such, it feels like the caption is gearing up to introduce a landmark moment for a young man named Dan, and it absolutely does.

If anything, we’d have been surprised if the game resumed and we didn’t see a teenage Dan Gosling celebrating the most important goal of his career to date.

After collecting Andy van der Meyde’s deep cross, Gosling kept his cool to avoid the attentions of the Reds’ defence before calmly curling into the far corner of Pepe Reina’s net.

Clearly, though, those in charge of sending us to the adverts didn’t deserve anything as good as that moment. Instead of actually watching the finish, we’d have to piece it together from a selection of subtle clues.