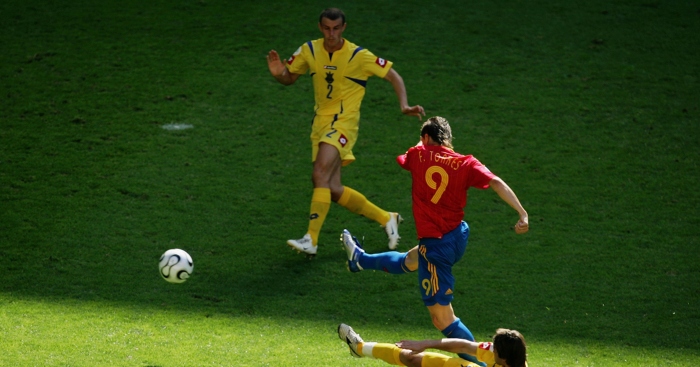 As a player preparing to take part in a World Cup or a major continental championship, you begin with a blank slate.

This rule might be more applicable to young, relatively unknown players, but that’s not the full extent of it. Sometimes it offers more established individuals, regardless of talent, to reinvent themselves on the biggest stage.

Think of it like starting university. You might have been the most popular kid at school, but you’ll be starting afresh in new surroundings, just like everyone else. With the right preparation, and a new support system, that kid who no one noticed as a teenager can flourish in a new environment.

If you were to show a photo of Puyol to someone unaccustomed to football, they might not immediately identify him as a centre-back.

Standing at 5’10” and boasting a well-maintained perm, his look screams 70s playmaker as much as it gives the impression of a rock at the back. Or at least it would, were it not for the plethora of footage of Frank Rijkaard’s Barcelona in the season before Puyol travelled to the 2006 World Cup in Germany.

Goalscoring stats never give the entire picture of a player, but at the time of the group game against Ukraine, Puyol had scored just three times in 300-odd games in La Liga, and just once for Spain. The mere sight of him in the opponents’ half was enough to cause you to do a double-take.

But the setting of a World Cup can do strange things to a footballer.

The pressure-cooker environment can be enough for greats to crumble, but those who flourish do so by treating the tournament as a law unto itself, with no negative consequences which can even come close to those that follow mistakes at club level – this is especially true of 21st-century tournaments, with club football beginning to edge out its international counterpart in terms of importance, but the idea of potential upsides far outweighing potential negatives is nothing new.

So, when Puyol spotted a loose ball in the middle of the park, the Barcelona version of the player might have opted to dive in and wipe out a Ukraine player sliding to the ground in his own attempt to win possession. Even if Puyol didn’t take the ball, there would be little risk of a counter-attack – crucial if he was going to strand himself downfield.

However, when you’re at the World Cup you can make your own rules and set new standards for your play. Which means doing this.

Despite what some might try to claim, football is not, at its core, a zero-sum game. One player adding to his goal tally shouldn’t mean a team-mate dropping down in the rankings and, likewise, Puyol becoming the pirouetting fancy-dan ought not to instantly transform any of his more creative or exciting team-mates into functional ball-winners.

For a split-second, though, Fernando Torres forgot about that particular memo.

The Torres of 2006 was still more than a year away from becoming the dominant frontman who would take the Premier League by storm, but he was already the Atlético Madrid golden boy who had top-scored for his country in qualifying.

He was the one in place to round off the moves, rather than kicking them into gear from deep, but he must have seen Puyol’s creativity and decided there was an attritional gap to be filled.

Ukraine may have ultimately got further than Spain in the competition, seeing off Switzerland in a dreadful last-16 clash as their conquerors fell to France, but there’s a feeling that they might not have got that far without an enforced pragmatism in the light of their humbling defeat against Luis Aragonés’ men.

World Cup games have thrown up some fantastic displays of attacking intent, not least the end-to-end brilliance of Senegal for Salif Diao’s memorable group stage goal in 2002, and while there are still a handful of dull games, the sheer volume of football allows you to develop rose-tinted memories: you can sit through an underwhelming 0-0 but the memory of that boredom disappears in a matter of hours, at least in the group stages.

We remember the good for longer than the meh because that’s just how the human mind works, and while that might mean some goals slip our mind a decade later, that’s only because they’ve been superseded by better ones.

Torres’ goal was Spain’s fourth of this game, but no one could describe any of the other three with confidence, simply because this one is good enough to stop you even caring about the others.

The strength of this goal comes from its relentlessness: from the moment Puyol intercepts that first errant Ukrainian pass, the entire team is focused on moving forward at every opportunity, and this is how you’re left with Puyol, long since past the point of defensive no return, advancing to the corner of the penalty area to provide Torres with the most appetising of knockdowns.

The Barcelona man is the pitcher offering up a softball, and Spain’s No.9 does not need a second invitation to knock it out of the park.

It’s a victory lap of a goal, Torres pulling his foot back as if releasing a party popper. Sure, he might have been more likely to guarantee a goal by taking a touch and passing the ball beyond Olexandr Shovkovskyi, but the triumphant nature of the finish carried such authority that, in retrospect, it feels impossible for Torres to have converted the chance in any other way.

The 2018 World Cup might throw up better goals than the one scored by Torres in 2006, but few will be even half as enjoyable.

It’s up there with Tony Adams breaking forward against Everton in 1998, or Ricardo Carvalho blasting home against Manchester United eight years later. A beaming grin of a goal, the kind only made possible by a centre-back breaking free from his responsibilities of stopping the opposition and remembering why he started playing football in the first place.

We might not remember the move if Torres had shanked his shot wide, but was there ever any danger of that? Spain scored that goal the moment Puyol decided they were going to score – the rest was just decoration, but the decoration was beautiful.