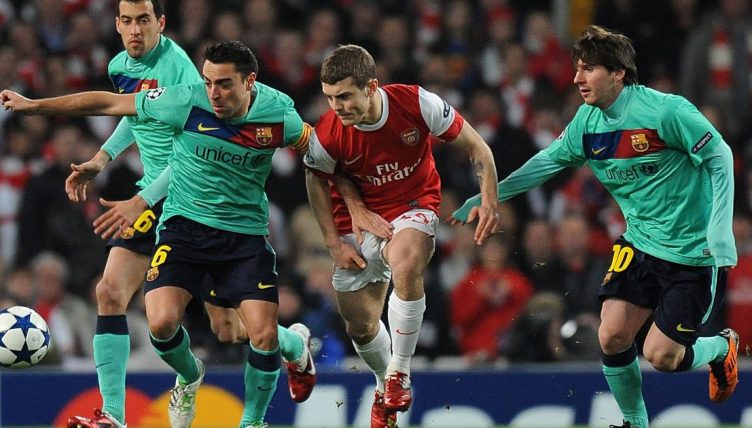 When asked about Jack Wilshere’s qualities on 18 February 2011, Arsenal manager Arsene Wenger came up with a perfectly succinct response: “He has a Spanish technique certainly, yes. He has an English heart because he’s an English boy.”

At his best, that was Wilshere in a nutshell, a lovely mix of two archetypes. Enough technical ability to mix it with the absolute elite of the Champions League; yet, alongside it, the tenacity, drive and snap in the challenge that you might expect of a box-to-box midfielder of a bygone era.

It was, it seemed, the perfect combination. And at the point that those words came from Wenger’s mouth, Wilshere looked for all the world as if he would develop into the finest English midfielder of his generation.

Just two days prior to that statement from Wenger, Wilshere had put in his finest Arsenal performance to date. It was his breakout display, bossing a Champions League last-16 game against a Barcelona midfield containing Xavi, Andres Iniesta and Sergio Busquets.

At the time, Arsenal were on a high. They’d had an up-and-down start to the season, finishing second in their Champions League group behind reigning UEFA Cup champions Shakhtar Donetsk and losing four league games before Christmas.

But by mid-February, they were flying again. They had lost just once since mid-December, and that was an irrelevance – a League Cup semi-final first-leg defeat that they overturned in the second game.

So, they had qualified for one final, were set to face Leyton Orient for a place in the FA Cup quarter-finals and were second in the league, just a point behind Manchester United.

The world looked rosy. Arsene Wenger’s Arsenal were back in the mix, still with a chance of silverware on all four fronts.

The obstacle in front of them in Europe was a significant one, however: Barcelona. Not just any Barcelona, the Barcelona. Pep Guardiola’s team were at the very peak of their irresitible powers, not so much crushing all before them as leaving all before them behind them, waltzing around teams and baffling them with their fulll-control football.

Barca were also a stone in Arsenal’s shoe, having beaten them in the 2006 Champions League final, which Wenger later referred to as the biggest regret of his career, and 6-3 on aggregate in the quarter-finals in 2010.

Arsenal would have to play above themselves to stand a chance avoiding embarrassment, nevermind winning. And the midfield would be the key battleground.

With Alex Song alongside Wilshere at the base of the midfield three and Fabregas ahead of them, it was a Barca-lite trio for Arsenal. Indeed two of the players moved to the Catalan club in the subsequent years and of the star of this show, Wilshere, Dani Alves later said: “If I was given the chance to choose, he is a player that I would sign for Barcelona.”

Wilshere’s early touches were calm and collected. He muscled Xavi off the ball, then nipped around Pedro as he came to press. Yet the first real demonstration of Wilshere’s intent was not a quick-fire passing sequence or pretty bit of skill.

Instead, he showed that other side of his game. Barcelona had dominated the early exchanges as they normally did, but as a ball went loose in the centre circle and Pedro went for it, Wilshere slid in, fully committed.

He took the ball and stood up in one fluid movement as Pedro appealed for an imaginary infringement and the Arsenal fans cheered with delight. Wilshere then nipped inside Iniesta and laid it in to Robin van Persie.

The tackle was not a real, old-fashioned, Razor Ruddock-style reducer, but in the circumstances it was as close as you were going to get.

Barcelona kept their pressure up, though, and soon it told. After Messi had missed a very presentable chance by his high standards and Robin van Persie had seen a firm shot from a tight angle saved by Victor Valdes, Messi dropped deep from his central striking role, turned burst forwards and played in David Villa.

Villa was bordeline offside, but the assistant’s flag stayed down and the Spain forward tucked it under the body of Wojciech Szczesny. Barcelona were ahead.

Wilshere’s head did not bow, though, even when Messi had a goal disallowed for offside.

As the half approached the end, Wilshere picked up the ball once more, looking confident. He was in behind the midfield three of Barca and drove away from them, dragging his team up the pitch and prodding a pass out to Robin van Persie, whose shot sailed past the post.

Wilshere told Arsenal’s In Lockdown podcast in May 2020: “I didn’t even think I was [playing that well]. I thought I was doing alright. When we got to half-time, I had done a few good things in the first half but I felt like they had dominated.

“They had a way of making you feel like you were running around in circles for no reason. They used to make these little passes in midfield and you didn’t know whether to press or to hold back and wait for them.”

But Arsenal were not done, not out of it. At the start of the second half, they started to assert themselves and Wilshere was at the heart of their improvement.

Within minutes of the restart, he picked up the ball in the inside right channel, turned and burst forwards again.

A one-two with Cesc Fabreegas took him past three Barcelona shirts and Wilshere got a shot off from the edge of the box. It was weak, easily saveable, but it was something to build on.

With just over 20 minutes to go, Wenger decided to throw caution to the wind, and Alex Song was withdrawn for the more creative talents of Andrey Arshavin. It was bold, but bold is what Arsenal needed.

Arshavin went to play on the left and, with his fresh legs and impish ability, Wilshere was drawn to the Russian like a moth to a flame. Two moments of fine combination play quickly followed.

For the first, Arshavin was wide on the right, and laid the ball off first time to his teenage team-mate. Wilshere played it back to Arshavin who played it back to Wilshere, who turned and played another one-two with Robin van Persie. Wilshere’s cross was blocked by Eric Abidal, but the pressure was building.

Then a similar move, albeit from a deeper starting position, set Robin van Persie away behind Abidal and Gerard Pique, forcing Maxwell to run all the way across the pitch from left-back to make a covering challenge.

Finally, the game had begun to turn. And soon Arsenal’s increased influence brought results. Arsahvin and Gael Clichy combied on the left, setting Van Persie in again. The angle was tight, but his rocket-propelled shot snuck between Valdes’ right leg and the near post. Arsenal were level.

Arsenal were in the ascendency and, with seven minutes left, they took the lead. Niklas Bendtner picked the ball up in defence and played it to WIlshere, who was clever enough to know exactly what was required. With his first touch, a pass went into Fabregas; the press was beaten.

Fabregas fed Nasri on the right. Van Persie burst into the area. But Nasri opted to use him by not using him, playing the ball into the space behind the Dutchman for Arshavin to run onto and curl into the bottom corner of the net.

The turnaround was complete. And in Wilshere, Arsenal had their homegrown hero.

Even Pep Guardiola was impressed: “Wilshere is a top player. He has been a big surprise. I did not know him at the beginning of the season, but he is an excellent player for Arsenal but also for the national team.”

Yet for Wilshere himself, it took a little longer to sink in. He told the In Lockdown podcast: “It wasn’t until after the game actually [that I realised how well I’d played]. It was Paul Akers, the kit man, who was like, ‘You just had Xavi and Iniesta in your pocket’. I said, ‘no chance’ and he was like, ‘I’m telling you’. Then I got man of the match.”

Couldn't learn much, they all spent the night in my pocket 🤣🤣 https://t.co/HfmnNdZeVB

Aged 19, Wilshere had announced himself on a European stage and England was enamoured with its new golden boy.

Yet Arsenal could not capitalise on their momentum. Eleven days later they lost to Birmingham in the League Cup final. Two weeks after that, defeat at the Camp Nou put them out of Europe again. By May, they had slipped to fourth in the league.

And, as we well know, Wilshere’s career would not pan out as hoped, injuries derailing him just as he was getting going.

A little over a decade on from that display, Wilshere found himself without a club and admitted to The Athletic: “Being honest, I probably never thought I’d be in this position. Today I was running around an athletics track and struggling to imagine I would be here at this point in my career.”

What should have been the performance that launched him on to bigger and better things has instead become his piece de resistance. A great game, a great memory, but one tinged with the melancholy of what might have been.